When you hear the name “Yeo Kaa,” the colorful, bright (and yet dark) scenarios featuring a wide-eyed girl with the signature bob come to mind. The candy-colored paintings are exciting, but they often end up disturbing the viewer’s mind.

Her works are the center of attention at the two latest big art events in Manila. Instagram was filled with photos of her Alone But Not Lonely inflatable sculpture and pieces from her “Wud Ya Do It” exhibit during Art in the Park. The line to see her “I Don’t Know, Baby” installation crowded the last Art Fair Philippines. And those painted tiles? Gone in two hours. 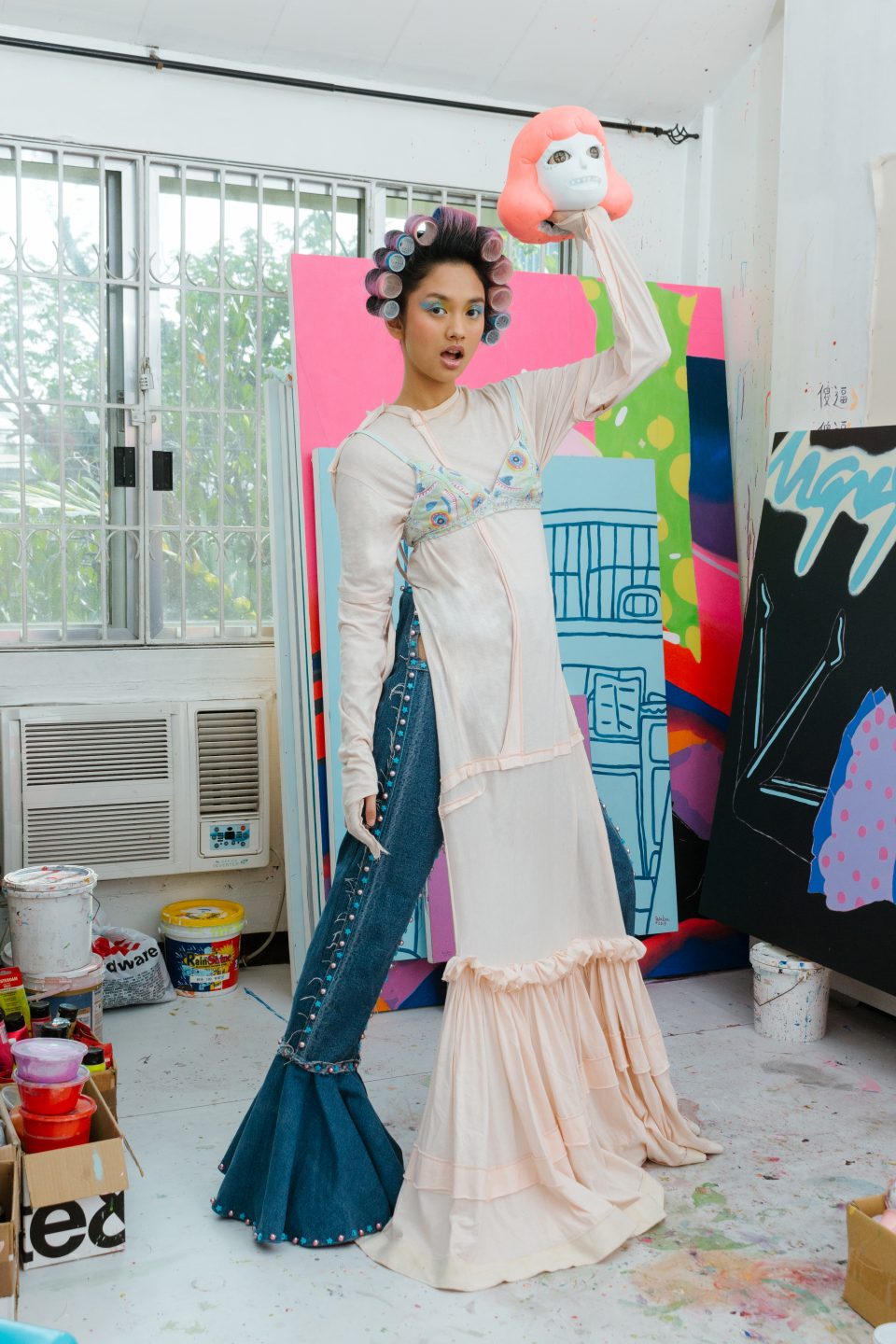 Yeo is no stranger to this attention and demand.

And yet, she also is.

Creating art, exhibiting it, and even selling it were not part of her plans. Things just took their own course—as is the case in life.

Take this hot mid-afternoon: The sun’s rays peek through the small glass windows of Yeo’s home-cum-studio. Canvases of different sizes and stages of completion line one wall, while several finished pieces lean on adjacent ones. Another wall sports rows upon rows of acrylic paint tubes—it looks like an art supply store—alongside shelves filled with assorted paint brushes and small containers of half-used paint.

The floor is speckled with neon pinks, yellows, greens, and purples—colors common to Yeo’s growing body of work.

And then you’ll notice a line of round little paint blobs trailing all over the floor—pawprints.

Or maybe your eyes will catch the little furball first. “Fakey,” the artist fondly calls her Pomeranian. 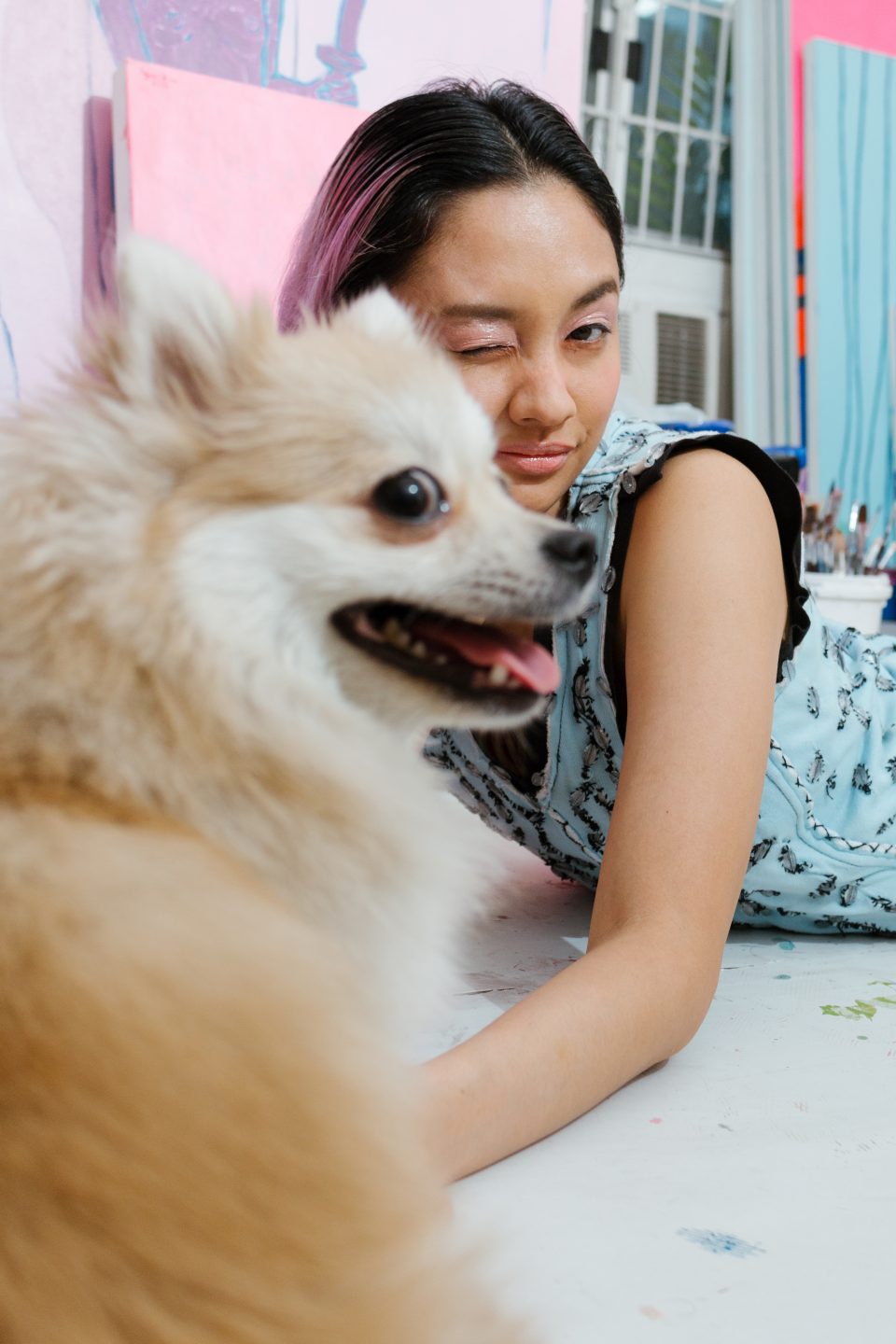 The artist herself is supposed to be painting, as is “routine” these days (with three group shows lined up, and two solo shows). Instead, she’s having pizza with us in between photos, talking about a recent kitchen mishap, when she placed too much cabbage in her nilaga. See, life just takes its own course, even in the everyday.

I ask if she has always wanted to be an artist, and if not, what she would say to the young Yeo Kaa, whose life has become so different from what she had imagined (cheesy, I explain). A pause. “Minsan, nag-so-sorry ako sa younger self ko eh, na na-disappoint ko siya, na hindi ako naging businesswoman na pinangarap niya.” I suddenly regret asking.

Or not, because she continues: “Pero masaya naman siya ngayon.”

You see, as early as first grade, Yeo had shown a propensity for trade—she would sell anything, from Sailor Moon stickers down to retaso from her family’s printing business, to her classmates. This “business” seemed to grow alongside her; by the time she was in high school, she already had a “mini tindahan” in her classroom, where she would sell all sorts of knick-knacks. This all came to a halt when she moved to Manila for college.

When her business studies at De La Salle University (DLSU) fell through, she transferred to the College of the Holy Spirit Manila (CHSM). There, she took advertising with the expectation it would be similar to her course at DLSU. 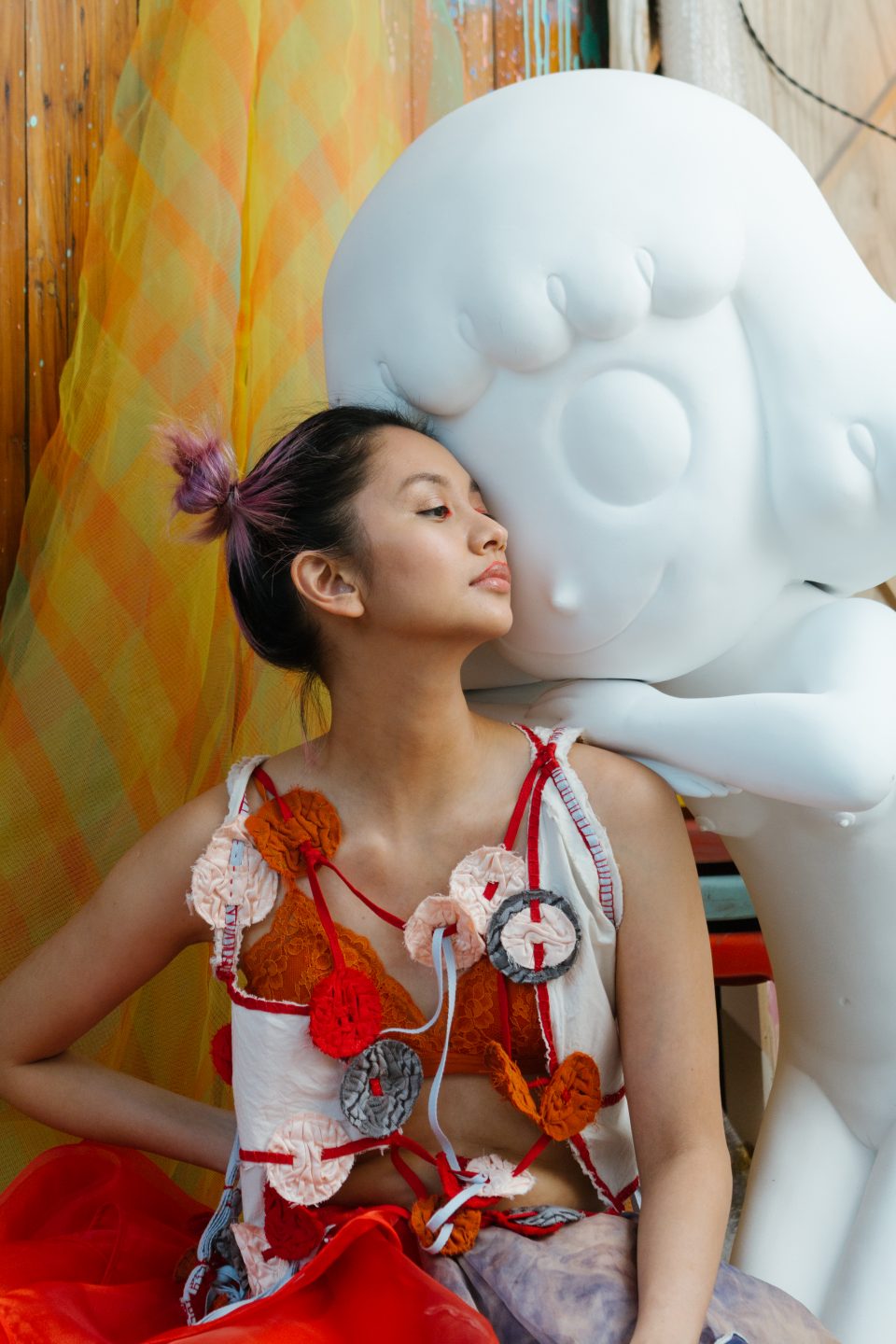 It turned out CHSM’s advertising program was under fine arts, not business. The realization that she could pursue art instead came later.

When asked about the specific moment, Yeo answers in a heartbeat: “Nung nanalo ako ng contest. Masaya pala siya.” It was 2010, and she, along with several coursemates, was required to join an on-the-spot painting competition hosted by the University of Santo Tomas. She bagged the grand prize. That same year, she also won the special prize from the Metrobank Art and Design Excellence (MADE) program. 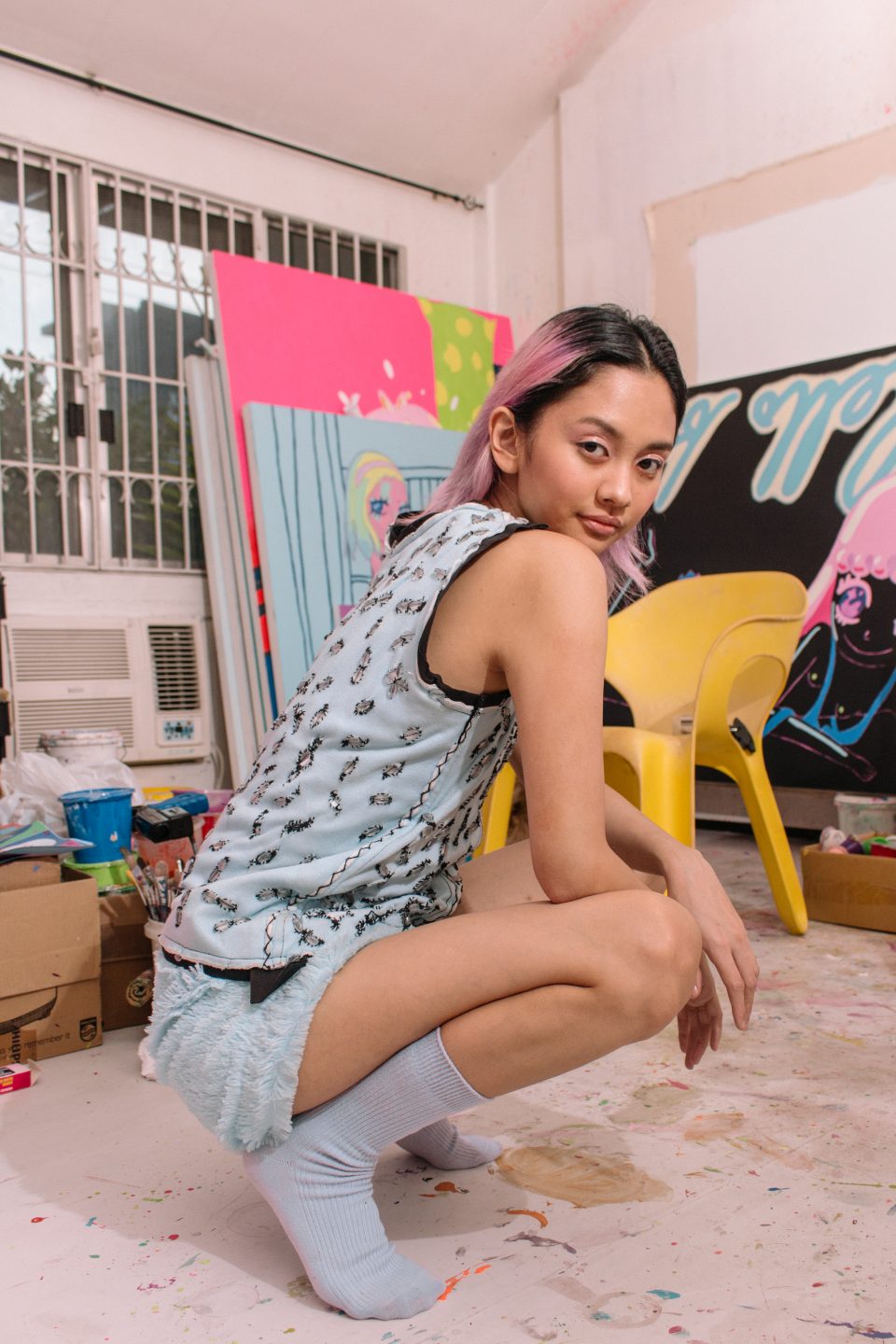 Almost a decade later, Yeo has figuratively put herself on the map, having held and joined a number of solo and group exhibitions here and abroad, with shows in Singapore, Indonesia, Hong Kong, Taipei, Paris, Switzerland, Austria, and Berlin.

The names of her shows are as honest as the works presented in them. Her recent Paris show, titled “Buy This Painting So I Can Buy This Shit,” is refreshingly straightforward. It takes cues from (or perhaps was made to fuel) her recent online shopping phase.

Read more: Young, broke, and ambitious: How to start your art collection in your 20s

Many of her works, though, especially the earlier ones, are somber, if not dark. The innocent, candy-colored worlds Yeo has painted on canvas contrast with the elements and themes within: death and suicide, pain and sadness, loneliness and sensuality, violence and gore. She shares that this is why, upon closer inspection, few dared to purchase her works back then.

Now, they’re literally lining up to see them. 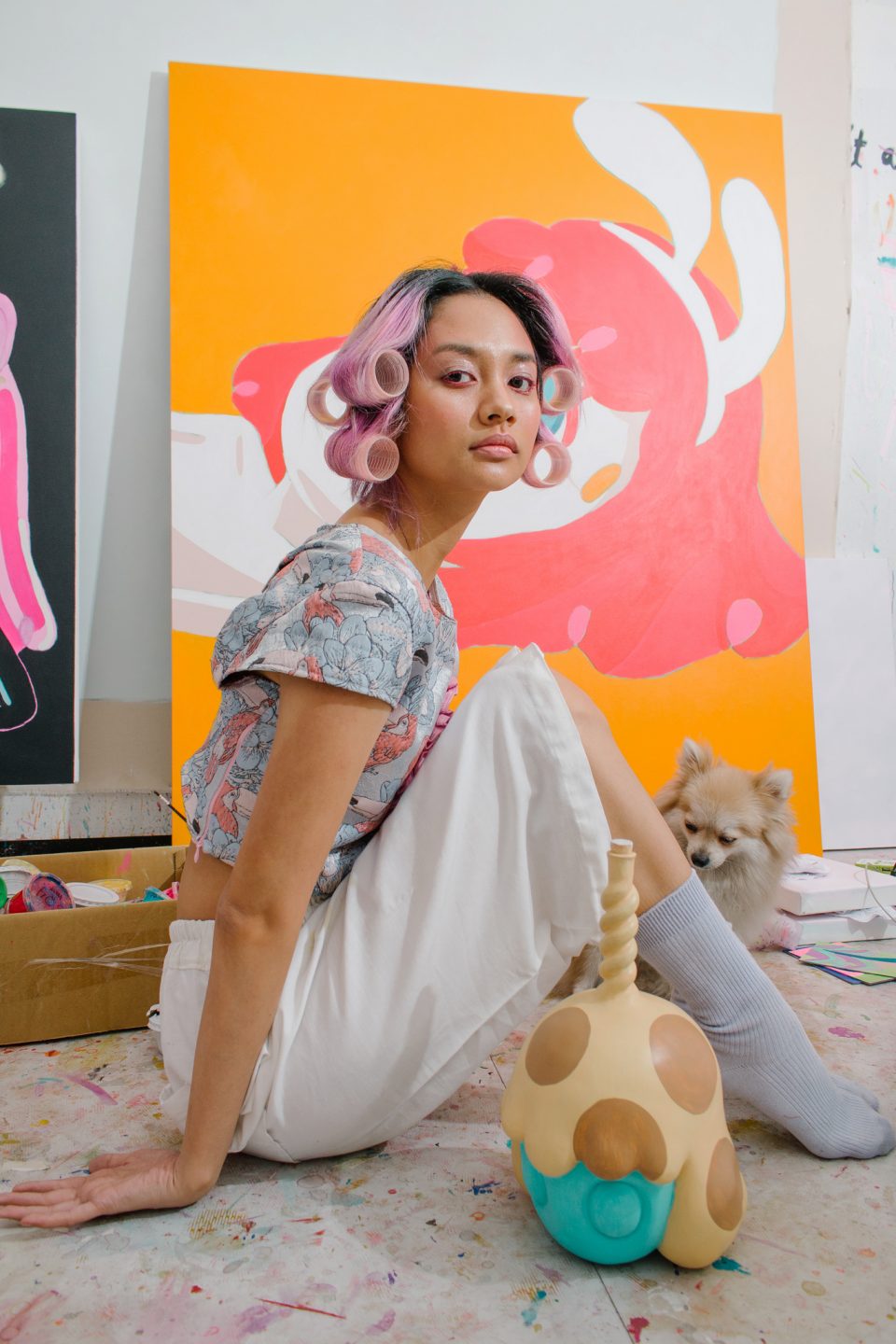