Kathryn. The name begins with a short puff of air and evolves into a gentle opening of the mouth. Before it permits the mouth to let out a grin, it requires a fricative—the tongue swiftly touches the upper two front teeth, expelling a rush of air that both interrupts and merges two syllables.

Once the mouth utters those two syllables, only one face emerges, along with a miscellany of scenes and images produced in the last 15 years of being in show business. She is Kathryn Bernardo.

There’s grandness attached to her name. But in person, Kathryn’s presence evokes nostalgia more than something marvelous.

In a literal sense, this shoot is a reunion. BJ Pascual has shot Kathryn in the past. Stylist Mav Bernardo, on the other hand, is Kathryn’s kin. “They’re cousins,” I told the Scout team when I booked Mav for this shoot. They thought I was joking. Kathryn, however, corrects me. She’s actually Mav’s aunt. Their minimal age gap, though, makes it more apt to call them cousins.

For those who are meeting Kathryn for the first time, it still feels a lot like a reunion with a childhood friend we haven’t seen in a long time. And why not? Kathryn has been a constant figure in showbiz since the early 2000s. 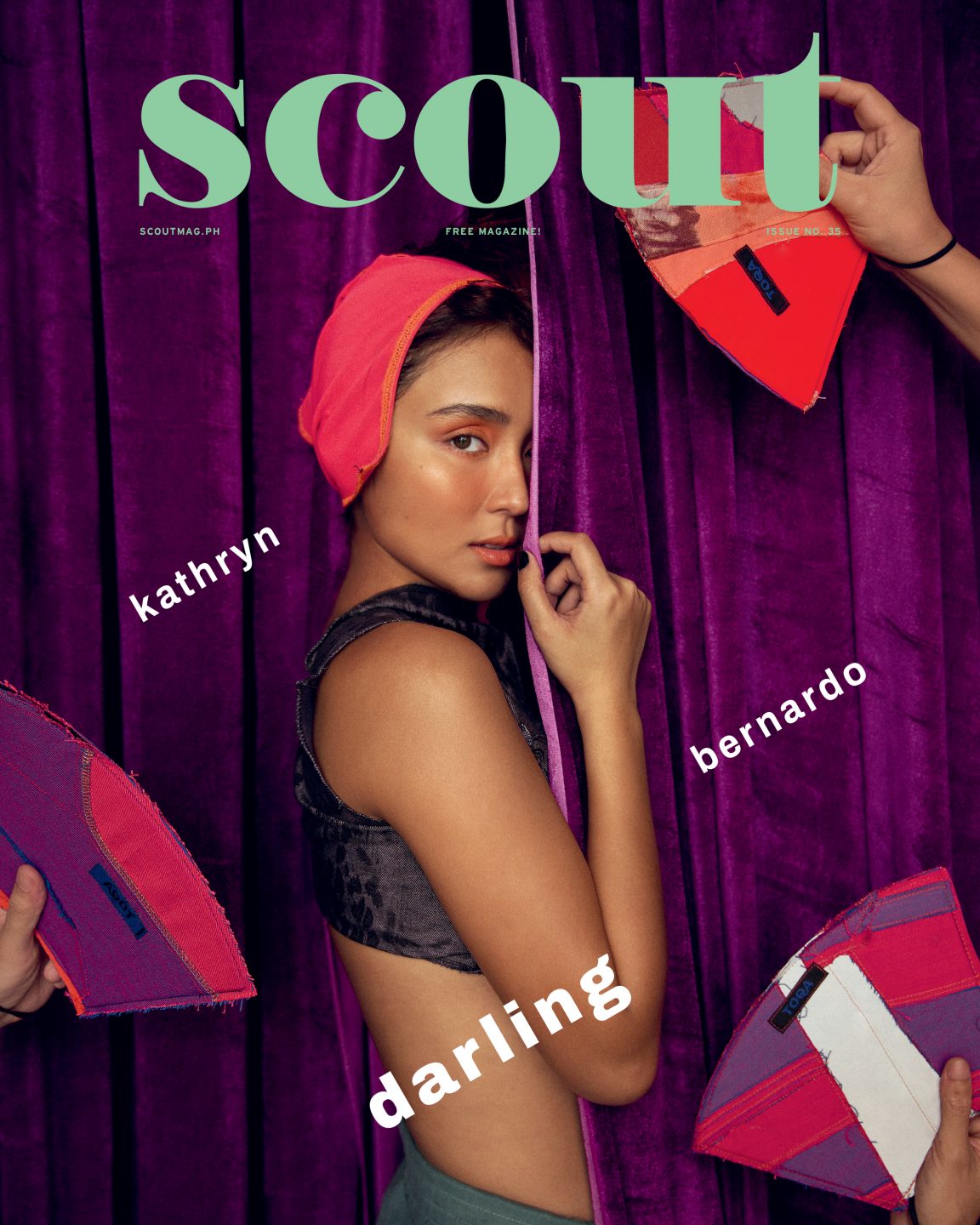 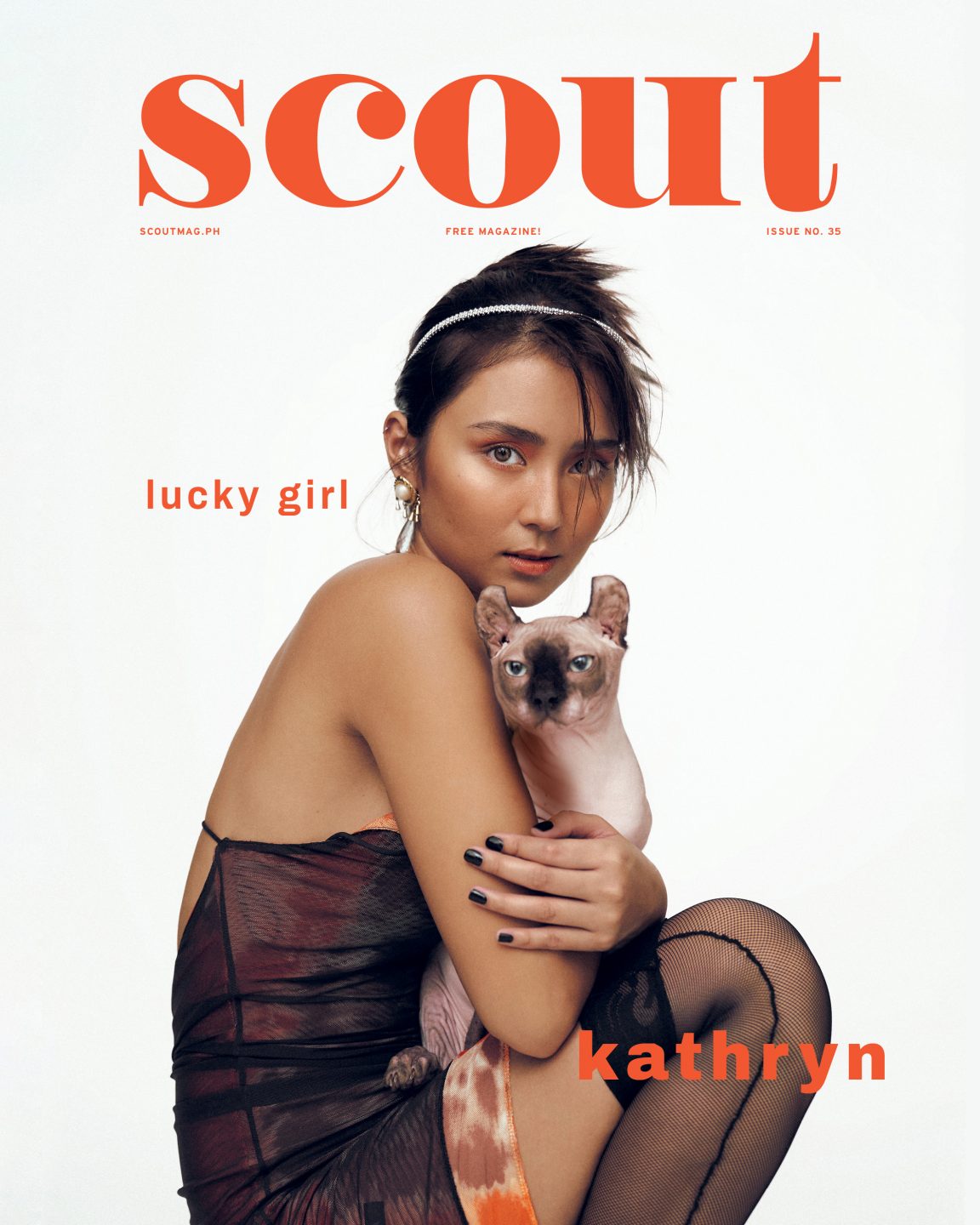 “Hindi mo ako makikita sa movie,” Kathryn recalls her first experience on set. “Lumakad lang ako doon kasi sinama lang ako ng sister ko. May wedding scene tapos dumaan ako.” The movie in question is Chito S. Roño’s Dekada ’70. As much as she was barely seen in the movie, Kathryn was also clueless about what was happening on the set.

Then, she became the trusty child actor who could portray the enthusiastic schoolgirl in Krystala, a whiny brat in Super Inggo, and as her funny self in Goin’ Bulilit. Soon, like all child actors, she graduated from childhood and found herself in limbo—caught in an awkward phase, having outgrown kiddie roles but still too young for a leading role.

The roles available for transitioning actors are usually the younger versions of lead characters in teleseryes. They are short-lived, often spanning three days to a week. Such is Kathryn’s role in the 2010 teleserye Magkaribal. She played young Anna, who, because of the tragic events she encounters at a young age, promises to seek vengeance for her sister and mother.

Kathryn admits that her appearance on Magkaribal was one of the most difficult. As a viewer, I would agree. At just 15, instead of getting teenybopper roles, Kathryn had to play a character whose poverty and tragedy pushed her to commodify her body. She needed to bawl her eyes out and maybe even strain her vocal cords in the majority of her scenes in the teleserye.

After we discuss Magkaribal, Kathryn is swift to add that her role as George in the 2018 film The Hows of Us was also a difficult one. “Feeling ko kapag tumatanda ka, mas mahirap gumawa ng roles kasi maraming ine-expect from you. Hindi pwedeng umiiyak ka lang. Dapat mas malalim,” she says.

The name Kathryn can stand on its own, but her name has more weight to it when it’s part of a portmanteau. In a jiffy, the name prompts a response. It’s most likely the name of her partner, Daniel Padilla. Then, the two names become one: KathNiel. It’s almost like they’re a single entity. After working together on almost every single project since they were paired in the 2011 teen series Growing Up, a huge chunk of Kathryn’s career has been built around the love team.

But right now, Kathryn is once again in limbo. She has announced that she isn’t working with Daniel this year, starting off with her first major movie project Hello, Love, Goodbye. It’s another transition period. She dares to break out of the love team shell. The only question is: Can Kathryn, the person, stand alone?

She dares to break out of the love team shell. The only question is:
Can Kathryn, the person, stand alone?

Kathryn began taking fitness seriously when she turned 18. It was the same year as the release of the landmark KathNiel movie She’s Dating the Gangster. It was perhaps a case of curiosity. Then, in 2017, it became a requirement. She had to undergo intense Filipino martial arts training for her role as Malia in the fantasy series La Luna Sangre. Now, despite her busy schedule, Kathryn still follows a strict fitness routine.

On the day of the shoot, Kathryn is scheduled for her Lagree session. Lagree is a high-intensity workout similar to Plana Forma and Pilates, improving endurance, core strength, balance, and flexibility.  In fact, we’re strictly following a schedule because she can’t be late. And guess what? Her handler says she has never missed a session ever.

“Kailangan eh,” she says when probed why physical fitness is her priority. It has become a habit created out of necessity. Showbiz is physically taxing, after all. And the only way to survive long nights and the daily grind is to make time for activities like cycling and Lagree.

Working out is not only a break from the camera, it is also respite from fame. It’s one of the few activities that permit her to be an ordinary girl. And believe it or not, that is what she craves.

“Habang mas tumatanda ako, mas naiintindihan ko ang sarili ko,” she says. And here’s what she knows as of the moment: Her star, no matter how big it is now, will not always flicker this brightly. This is why she ventured into businesses like her nail salon, Kathnails, and her collaborations with the brand Happy Skin. “’Yung first dream ko, I wanted to be a makeup artist. Kaya na-e-enjoy ko ’yung collab with Happy Skin kasi gusto kong nag-pla-play around with my looks,” Kathryn explains.

But even if the current circumstances permit, she still sees herself doing other things after her life in showbiz. “’Di ko nakikita ’yung sarili ko na forever sa show business.”

Kathryn sits on the floor as the shoot draws to a close. It’s almost 5 p.m., an hour later than the agreed cut-off. This means she might be late for her Lagree session, but Kathryn remains without complaining.

The cats at the shoot are, in fact, far more demanding. They attempt to escape numerous times. Maybe they smelled traces of her dogs. Maybe her gentleness isn’t calm balm for felines. But that’s all right. She just acquired a cat, and she has a lot of time to work on her “cat person” hood.

And Kathryn is definitely taking her sweet time. The time for the island girl Kathryn hasn’t arrived yet, but the beach will always be there.

Right now, the time is ticking. Not for her island dreams but for her Lagree session. She slips out of the Toqa dress, changes into a white tee and leggings, greets fans on the way out of the studio, and ties her hair in a ponytail. Will she make it on time?