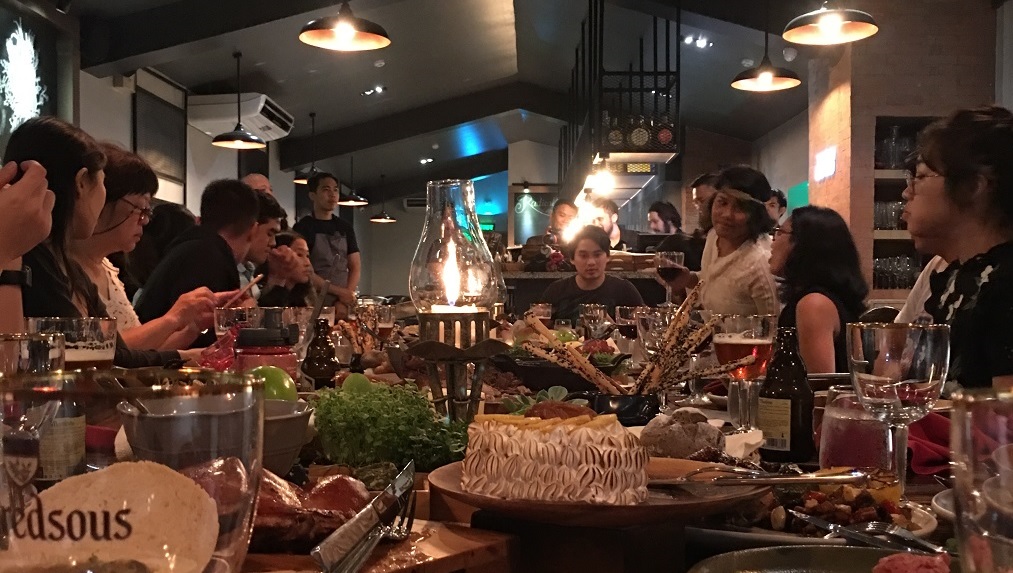 I’ve never had an experience that has ever come close to what I would suspect dining in Westeros would be like, or even an enjoyable night eating at a table full of strangers with food that I’ve nevero ttried before. That is until, I went to Privatus Dining in Pasig for “A Feast of Ice and Fire;” a three-hour long banquet held on the last three Saturdays of July from 8 to 11 in the evening, where chef AJ Reyes of Privatus Dining prepares a feast that recreates and explores the culinary world of the Game of Thrones. 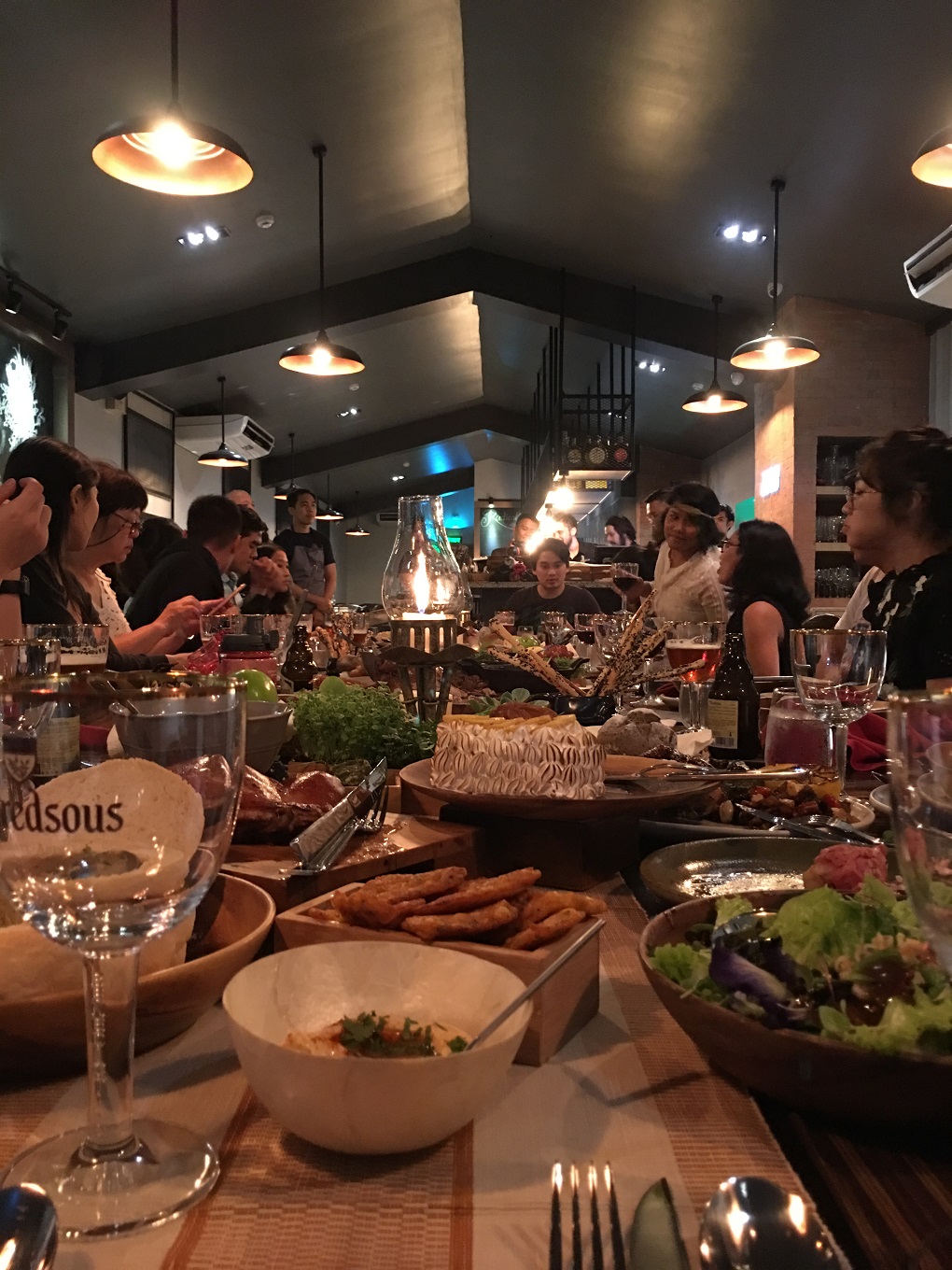 I went on the first night it was held with my boyfriend Bryan and well, the surprisingly pleasant and unforgettable night started with us getting lost with our Uber driver for a good five minutes (five stars for the man with the patience). Although difficult to find, Privatus was extraordinary when it came to experience, thoughtfulness, and atmosphere. Before entering, we were greeted by Lord Petyr Baelish, Lord Varys, and Lady Sansa Stark.

It was then when I knew that I’d be going home with more than just a satisfied stomach.

The restaurant’s interior was rectangular, which was perfect for the long tables that would mimic a grand feast. The room had a warm hue (because candle ~*aesthetic*~) and the walls were decorated with House flags. It felt like the whole restaurant had its own Pinterest board. And best of all, when we entered the table already had a wide array of dishes arranged accordingly. 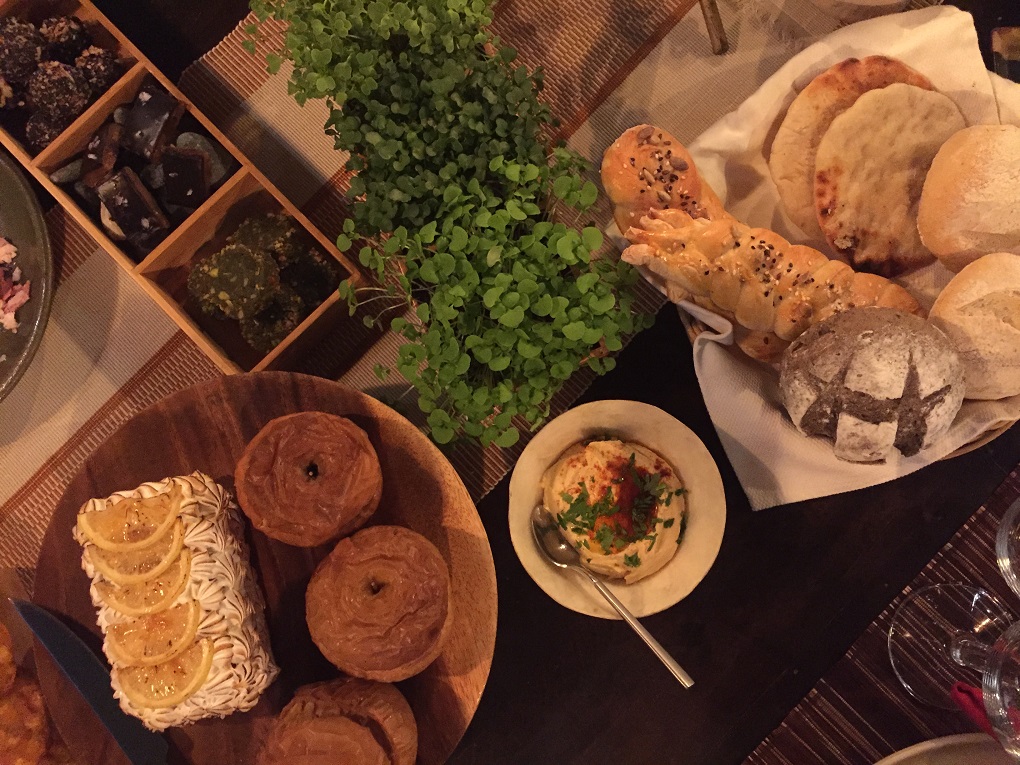 I heard there would be different types of breads and appetizers—and honestly I was excited alone to hear that there would be bread because bread just looks so much more better in the 15th century—but there there was more than that laid out. Roast beef, cakes, pies, chocolates, dips, spreads, fruits, stews, you name it, it was all there! And I had no clue what to eat first. 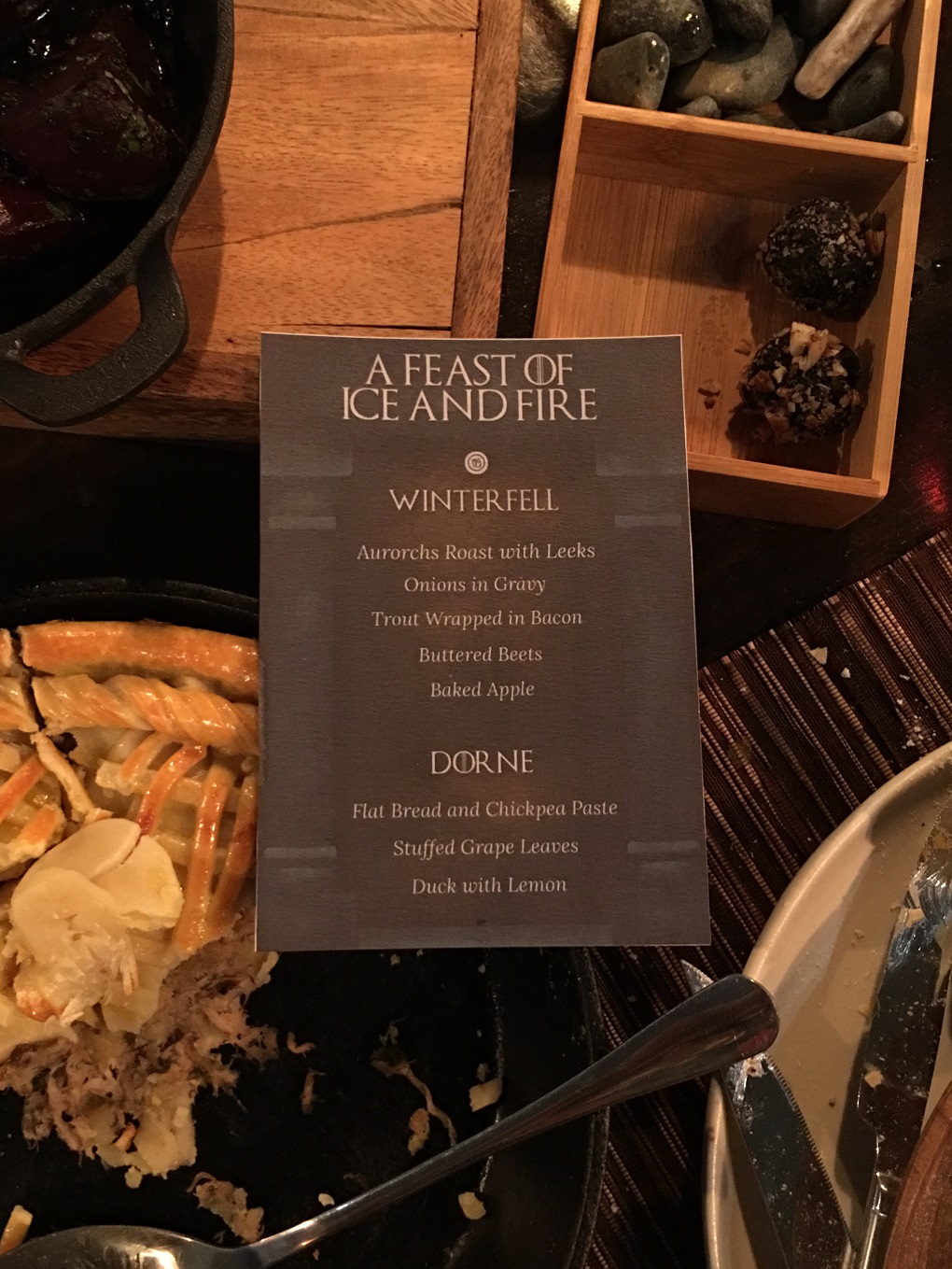 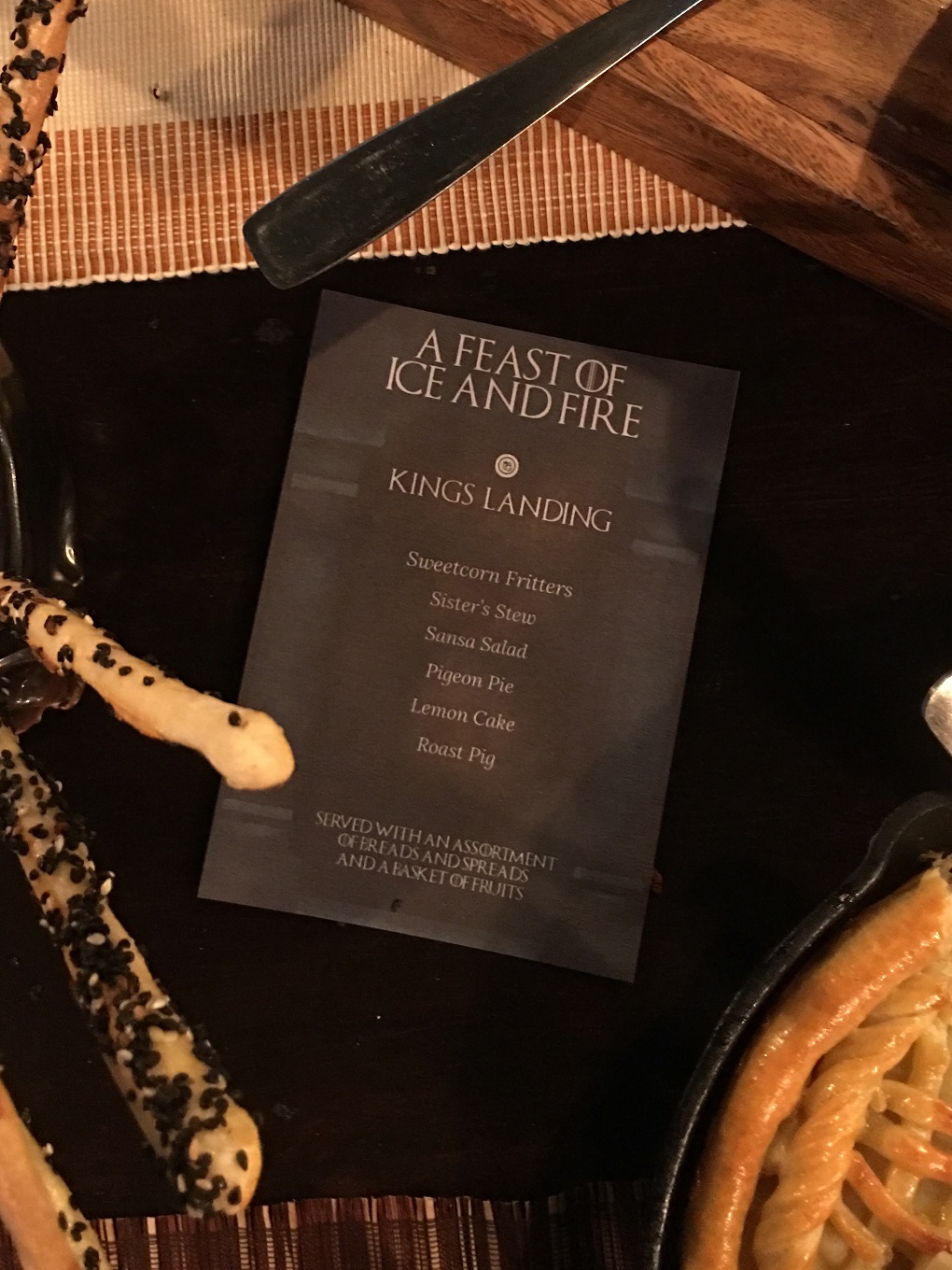 I hesitated for what glared at me from where I was seated; it was roast beef laid out on a big cutting board. The woman who sat across me urged me, “It’s really good with the gravy. Go ahead and try it.” So I tried it.

These types of small interactions were frequent and delightful and Lord Baelish engaged with guests often. “I feel like Little Finger would play host if he was here, right?” he would say, and then later talk about Game of Thrones theories, his fake facial hair, and APCC. And every so often Lord Baelish, Lord Varys, or Lady Stark would interrupt to play a short trivia game in order to win collectible items, which I won zero times, because the questions were actually difficult, and I apparently know nothing.

I tried to survey as much food as I could, taking small bites of each dish so I could get the full experience. I mean, I even tried the pigeon. And the pigeon pie was actually great. It blended both elements of pie and pigeon in my mouth so well, and it helped that it tasted like chicken. 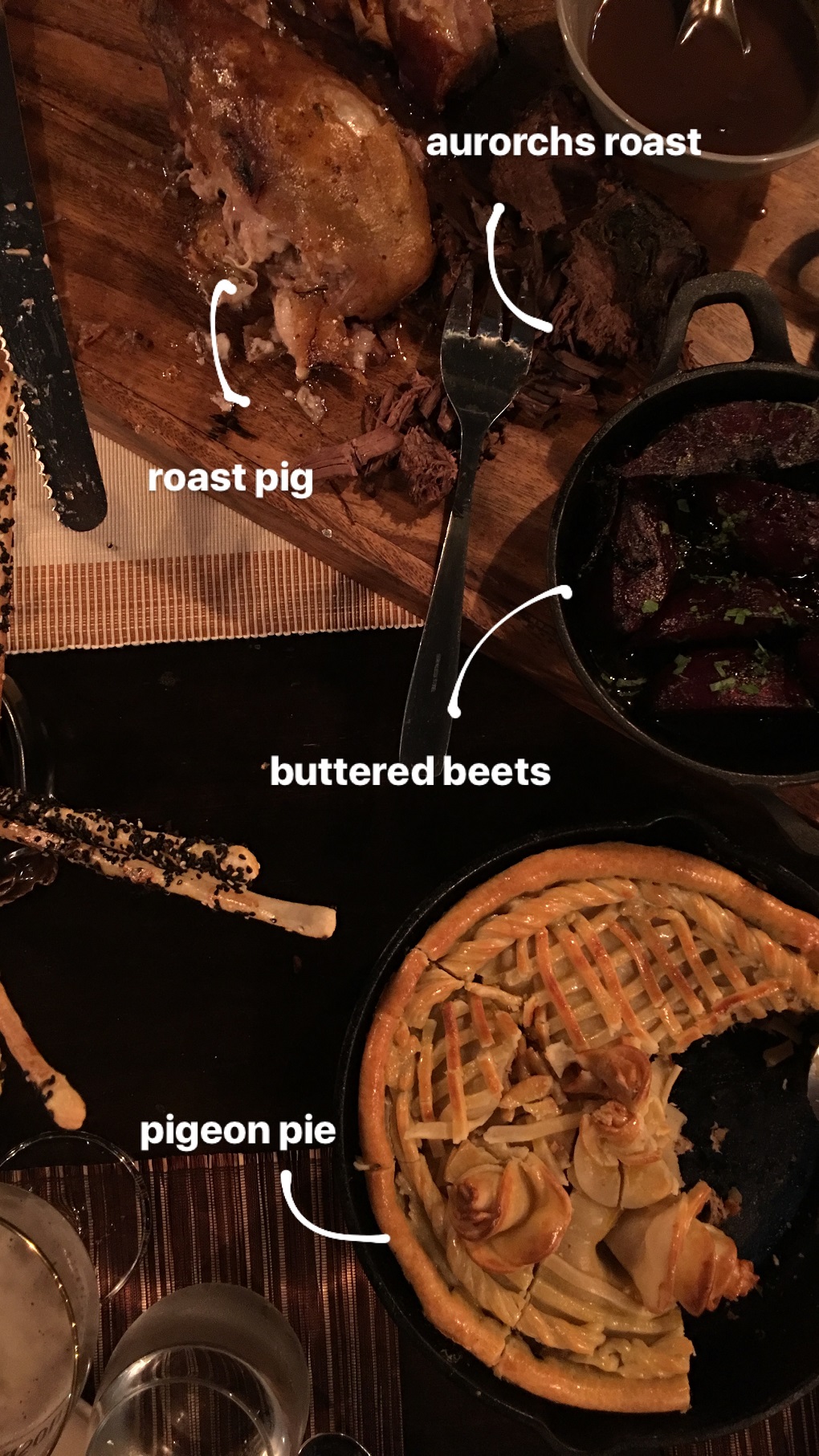 Although I must admit, the roast beef was my favorite; a dish called the Aurorch Roast, it was smokey, shredded and savory. I did however, started feeling hiya because…well, I didn’t want to be “that girl” who still, after two hours, is still reaching for more roast beef. So, I went for the chickenpea paste, another one of my favorites. 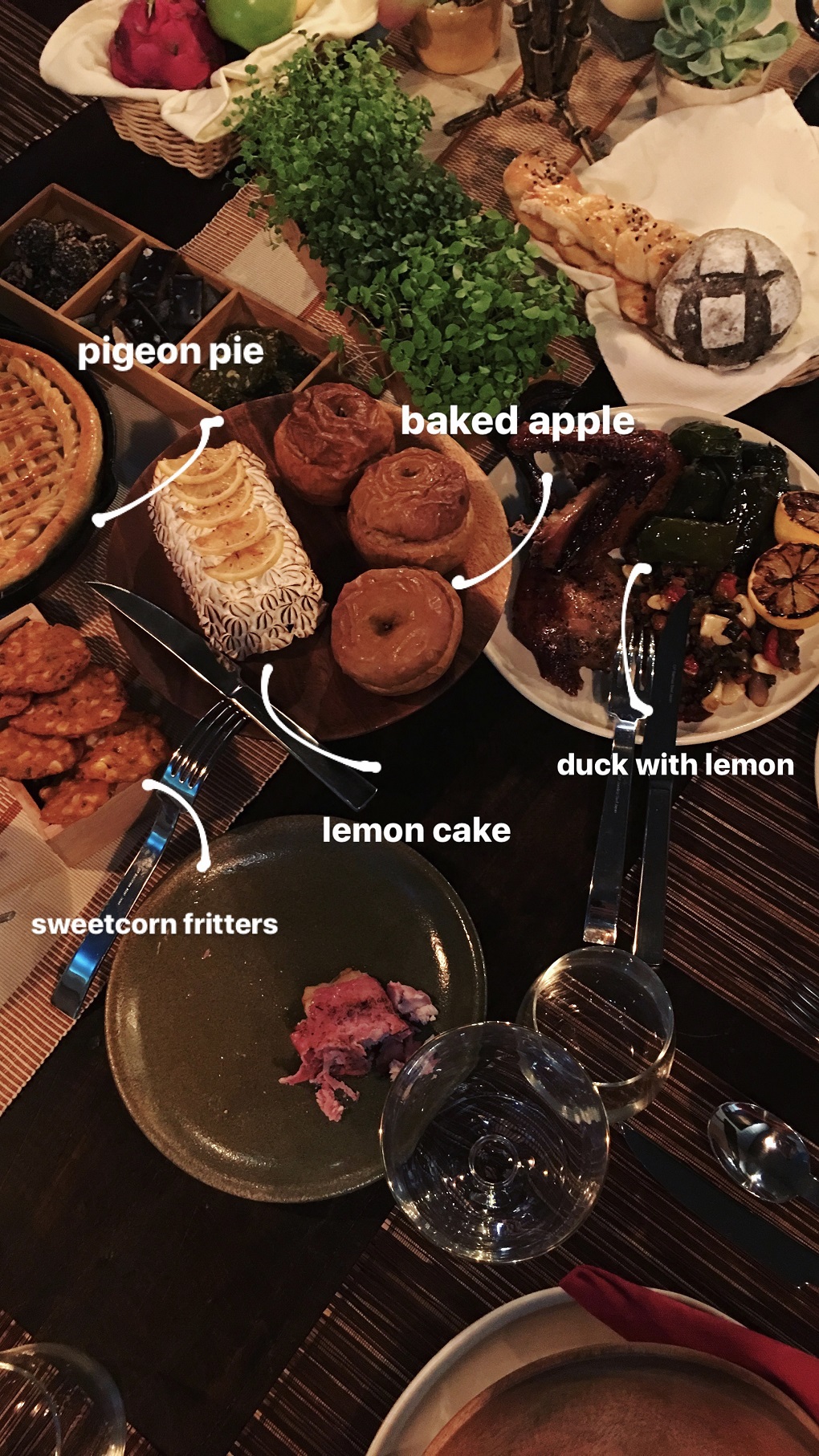 My other favorites of the night include the Trout wrapped in Bacon, the Baked Apple, and the Lemon Cake. The trout was light and perfectly seasoned with the salty flavor of the bacon while the Baked Apple was a perfect combination of sweetness and warmness—the kind of sweet that’s sweet but not too sweet. I could eat for seven days straight. It was also filled with some oatmeal, streusel thing that brought a hearty sort-of blandness to the sweet and tartness of the apple. The Lemon Cake on the other hand was moist and soft and its frosting was a meringue looking mixture made with something similar to marshmallow. It was heavenly and I felt like it would be the food personification if I said the word “dream.”

As I said, I went home with more than just a satisfied stomach. The experience was more than just dining with a theme for recipes. It included great conversation with friendly individuals, games for a common interest, and an atmosphere combining all those elements together with a single peg. Even if you’re not a Game of Thrones fan, it’s worth going just for the culinary experience alone. I mean, I’m certainly looking forward to more themed dinners now.

The boys are busy. Like real busy. Since we first met them over...

Camille Fernandez If you’ve ever been to a party at Jollibee we all...