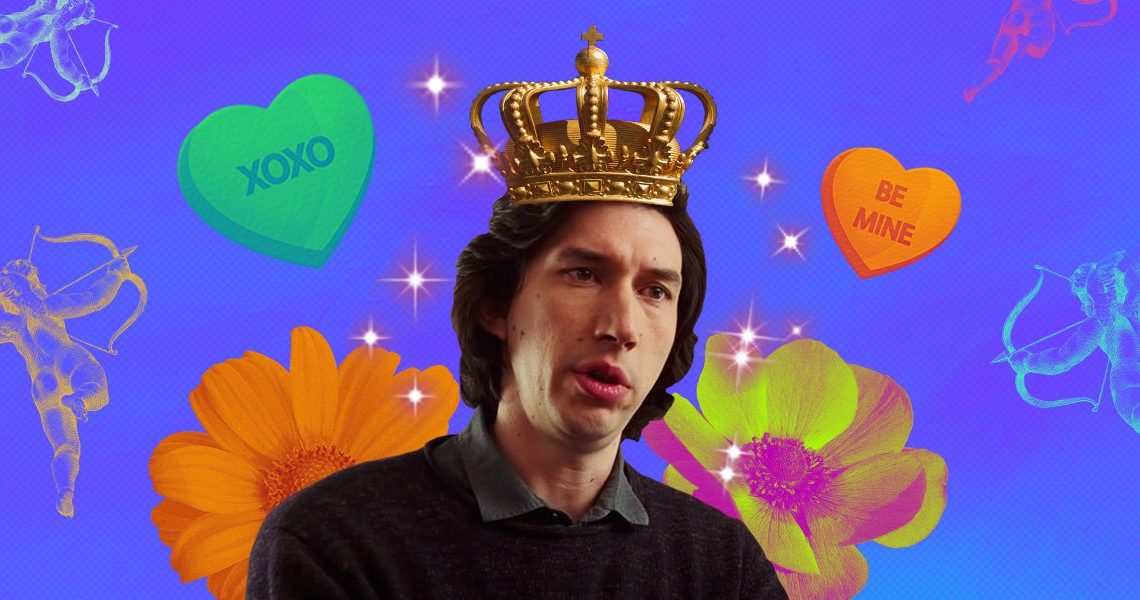 He had dark curls styled like a Gothic prince and a haughtiness like a young adult book’s male lead. An odd contrast to when his grandfather, Darth Vader, unmasked in “Return of the Jedi” where audiences saw a crippled old man about to wither. Yes, there he was: Kylo Ren/Ben Solo, played by none other than Adam Driver.

Unlike some of my college classmates, I didn’t watch HBO’s “Girls” and knew nothing of Driver prior to his appearance in “Star Wars.” And while his introduction to the galaxy far, far away struck me, it wasn’t until its sequel, “The Last Jedi,” when I fell into the pit of Adam Driver stan-hood as if Palpatine flung me in.

Much like most internet boyfriends, Adam Driver is an acquired taste. Several polls have come and gone seeking the definitive answer to the age-old question, “Is Adam Driver hot?” “Unconventionally attractive” is a phrase thrown about in several descriptions of him, or the oddly put “Vegemite of 21st century heartthrobs,” as GQ Australia writes. Those who have heard of my particular inclination towards Mr. Driver catch the same thing: He isn’t the cookie cutter handsome manufactured in the Hollywood factory, but the intangible mystique is still there—lingering until it pounces, unaware that it’s 5 a.m. and whoops, they’ve watched 500 hours’ worth of his IMDB page on accident.

And really, I’m not the sole prophet for the Church of Adam Driver. John Oliver has a recurring gag in “Last Week Tonight” where he describes Driver in varying degrees of hugeness. “Step on my throat, Adam Driver, you rudely large man,” Oliver declares in the first of many, many iterations. “Break my fingers, you brooding mountain.”

Fellow Adam Driver researchers at The Cut have several articles detailing Driver’s enormity, with lists proclaiming their strong desire for Adam to cradle them in his gigantic arms. Vulture, on the other hand, has penned investigative reports on his appeal. Its writer, Hunter Harris, an eternal mood, has a following in the actor’s fan circles because of her series of thirst tweets.

im deleting this tweet bc the wave of vitriol it sparked is wild but want to transparent about it, so here’s a screenshot for posterity. my main point was that spike lee was right, adam driver is 100% hot pic.twitter.com/qpIKCTAunt

No one:
Absolutely no one:
Us: Anybody else need an Adam Driver wallpaper for your phone? pic.twitter.com/RJW4NG7XUY

Some may ask, what is the Adam Driver mystique all about? There are studies dedicated to his profile in attempts to decipher his so-called mismatched features. Adam’s physicality is a play of contrasts—he stands at six foot three, broad-shouldered, muscular and built like a fridge. There’s the hard edge of an aquiline nose, with his deep set eyes coupled with an even deeper voice. On top of that is a full head of luxurious hair that I would want as my own, if I were so blessed.

The dichotomy seems to fuse well into one giant man. There’s the combination of alpha masculinity straight out of an A/B/O fanfic (Side note: Don’t Google that) and the sensibility of someone who’d give a TED Talk on the significance of hand touches in 2005’s “Pride and Prejudice.” Martin Scorsese calls Adam “one of the finest actors of his generation” and it isn’t a title given lightly. He pours nuance into every character he fills, whether it’s the blockbuster antihero that would have easily fallen into caricature territory, or the father on the brink of divorce in “Marriage Story.”

And in my case, the defining factor of the Adam Driver mystique™ boils down to the personality he wears during the few times he’s seen in the public eye. With each and every interview, I started to see myself in him.

There’s the awkward uncertainty in the limelight, the quiet intensity, the self-deprecating dry humor, the bouts of existentialism that would make Nietzsche proud (“I don’t have parties, because the world is a sad place and full of anger.”) But beyond that, this is someone passionate about his craft and advocacies. When he took the leap with the uncharted fame attached to “Star Wars,” I took it as motivation to try out new ventures too, never mind the doubts.

Stan culture is a fickle thing. Just as any person who favors a celebrity, we’ll never really know what they’re like in reality. But here I am, seeing myself reflected in a 36-year-old actor, as if that was me if I were a famous Oscar nominee. Seemingly closed-off, would sooner vanish from the face of the Earth, dislikes attention, but would do anything for the sake of their art. And if he can make it to the big leagues as an artist—well, then, there’s hope for little ol’ me too.

Therefore, I conclude: Yes, Adam Driver is hot. No, I will not take further questions.

SHAREThere are a ton of ways to customize your island in Animal Crossing,...

SHAREIt’s Friday again, and it’s that time of the week where we ask...