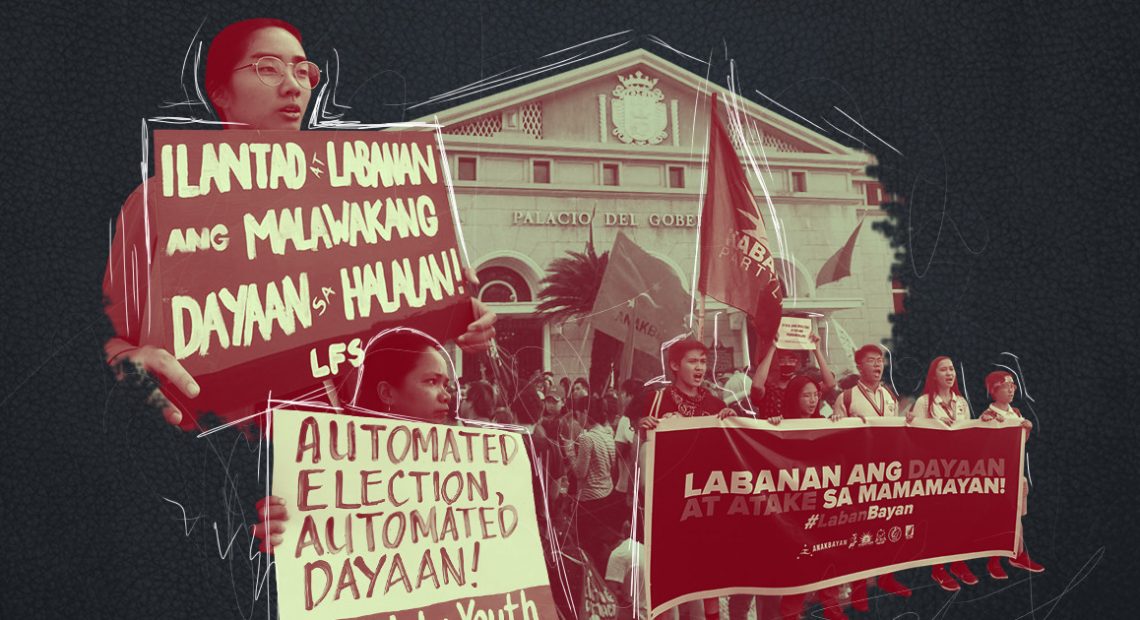 Nothing unites people more than mutual rage, and the 2019 Philippine General Elections is proof of that. Everyone from Mike Enriquez to Kuya Angkas driver is fuming at the (un)surprising turn of events that landed some of the country’s most notorious land-grabbers, plunderers, and administration lackeys seats in the Senate, the highest ruling governing body in the land. Suffice to say, it’s a national disgrace. That’s why, on Tuesday, May 14, just one day after voters cast their ballots and only hours after the partial unofficial results broke social media, student activists took to the streets to let the world know that they were having none of it.

While I’m no longer a student, activism isn’t something you simply graduate from. So after getting wind of the youth-led #LabanBayan mobilization happening later that day in front of the Commission on Elections (COMELEC) Main Office in Intramuros, I, being my impulsive self, timed out from work and walked out of the Hinge office to join the protestors. (Sorry again to my editor who is probably going to read this.)

Read more:  I never understood protests until I joined one

It’s been months since I’ve joined a mass mobilization, and as someone who spent many days of her college years skipping class to join protests, going to that rally brought to an end the emptiness that I’d been feeling for a while. Once you feel that fire of having a purpose, it’s hard to douse the flames. Activism changes you—you can’t go back to who you were before, not when you’ve been exposed to the realities of the masses and the struggle for genuine change.

Activism changes you—you can’t go back to who you were before, not when you’ve been exposed to the realities of the masses and the struggle for genuine change.

All the major youth groups were present, waving their organization flags and shouting the rally cries. Students from every major university were marching to COMELEC, with the echoes of their cries bouncing off the walls of Intramuros. It was a sight to behold, especially with a crowd so young. I’m not old by any means, but I suddenly felt old surrounded by all the youths present that day. Some were in college, but a big chunk of them were from senior high. That made me stop for a moment. When did the future of our country rest upon the shoulders of minors?

Read more:  This is what art activism in the Philippines looks like

The election results might inspire dread in everyone, but for the young, it’s only giving them—us—more fuel to fight back. The kids are alright, and they’re not going down without a fight.

As we were walking, and at times running, from Intramuros to Taft Avenue, I noticed that the people in front and behind us were senior high students, some still in their gym uniforms with their IDs laced around their necks. One of them even led the cries with a voice stronger than what I would expect from someone his age. Meanwhile, the girl guiding our little group later told me that she was only 17 years old and a member of the organizing team. I can barely decide what to eat for lunch, but these kids still in their teens are already sure about fighting the good fight. The election results might inspire dread in everyone, but for the young, it’s only giving them—us—more fuel to fight back. The kids are alright, and they’re not going down without a fight.

Gen Z’s are taking their tweets to the streets because the real fight isn’t on social media—it’s on the ground, standing side by side with the masses fighting for a future we deserve. #HalalanDayaan2019 made it to Twitter’s trending topics soon after the unofficial results were out, but our words and opinions need to be actualized into reality, whether that’s by joining an organization like Kontra Daya that’s tracking the election anomalies or volunteering at your local youth council to start change at the grassroots. Maybe even become an activist yourself if you’re up for it.

Either way, this election is a testament to the fact that it takes a nation to keep corruption, and corrupt politicians, at bay. So, stop Googling visa requirements and green cards, and focus on what we can do, not what we lost, to make things right. Follow the example set before us by these young activists and realize that while it’s the end of the midterm elections, this marks the start of a three-year campaign to reverse the damage that’s been done.

Renton, Spud, Sick Boy, and Begbie are back.

To all the young Mr. Robots out there, here’s your chance to prove...

Gather ‘round fellow weebs and start rooting for your fave “Haikyuu!!” teams ‘cause...