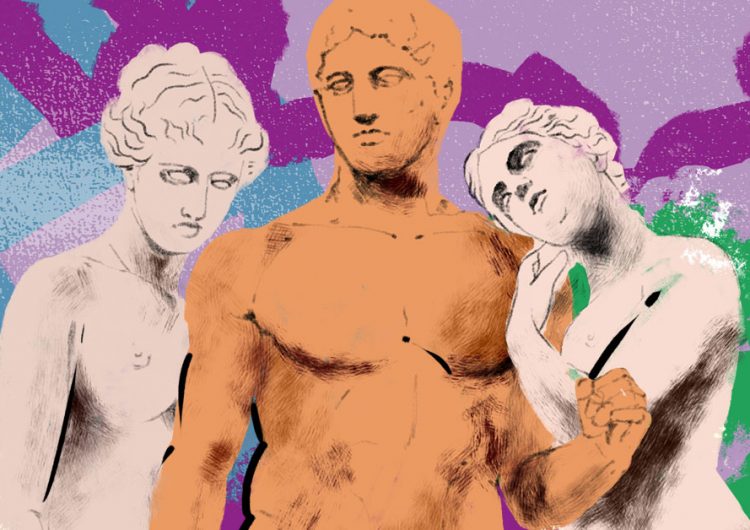 How interested were you in threesomes before you had one?

What were some of the fears you had going into it?

Blake: Before we tried it we read up on it, read some accounts of people having unexpected bouts of jealousy. I was quite confident it wouldn’t happen to us but it was a concern.
Sal: My aforementioned self-centeredness is a big concern. I have a tendency to let feelings of jealousy linger, and to let them affect my self-perception. I also didn’t want that bitterness, should there be any, to affect my relationship with Blake.

What made you finally decide to have one?

Blake: For me personally, I think once I felt confident that we both wanted it, and that it was about trying something new and having fun, it felt a lot more natural and liberating to finally experience it for ourselves.
Sal: Meeting our threesome partner! The thought of sharing Blake with someone so interesting and alluring was very persuasive. Also, knowing how open minded she was towards polyamory and group sex was also very attractive. I was afraid that our partner might be dismissive towards us, or wouldn’t be as accommodating to us first timers, had they not been as experienced as her. Knowing that she’s queer also really helped; knowing that she was into both of us made me relieved that I didn’t have to compete with someone else for Blake’s attention. It was good knowing that being with her would also provide her as much pleasure as she could garner from Blake.

Blake: Personally, I was looking for someone who seemed interested in both me and Sal, and also hot [laughs].

Blake: Usually in our relationship, I’m the dom and she’s the sub. Once we were all together, turns out she really enjoyed being a switch! I thought it was great, and it makes me really excited for another threesome session with her so we can explore it.
Sal: I was surprised how much I enjoyed having sex with her! I consider myself to be very straight, I still do, but I thought my lack of sexual attraction towards women would get in the way of my enjoyment and would make everything awkward. Gladly, it did not. I loved seeing her in pleasure, I loved touching her, and I thought she was really beautiful.

It also surprised me how smoothly it went, and how much chemistry we all had. I expected it to grind to a halt more often than it did. I really hope she feels the same way towards our shared experience.

What about the worst?

The physical and mental strain was incredibly worth it though, so I can’t really say I hate it.

Did it change your mind about threesomes? Why or why not?

Threesomes are fun and exciting, but also nervewracking if you’ve never had one before. Keep a few things in mind before you have your first three-way:

1. Discuss everyone’s boundaries before you dive into the action. It’s good to keep an open mind about what you’re willing to do, but it’s also okay to put a hard limit on things you feel uncomfortable with–whether it’s physical or emotional.
2. Plan ahead. You’ll need a bigger bed, an air-conditioned room, and maybe even some snacks and refreshments in case you need to take a break.
3. The right threesome partner will make or break your experience. If you’re not sure where to start, invite a friend or someone you know (that you’re attracted to). There’s less pressure to perform, and it’s easier for everyone to relax.
4. If you’re part of the couple, make sure the third party never feels like a third wheel. Ease them into it by tag-teaming them first.
5. More partners means more risk. Pack extra condoms, and always use a new one when switching partners or sexual acts.
6. Threesomes are all sorts of sexy, but also all sorts of weird. It can be a combination of awkward limbs and sensory overload. As with all things, it can be better or worse on paper than in real life. Be realistic but enthusiastic, and be prepared to accidentally kick someone in the face while you’re trying to figure out what positions work.

This phone is a real game-changer for content creators

SHAREAt the start of the quarantine, you best believe a lot of us...