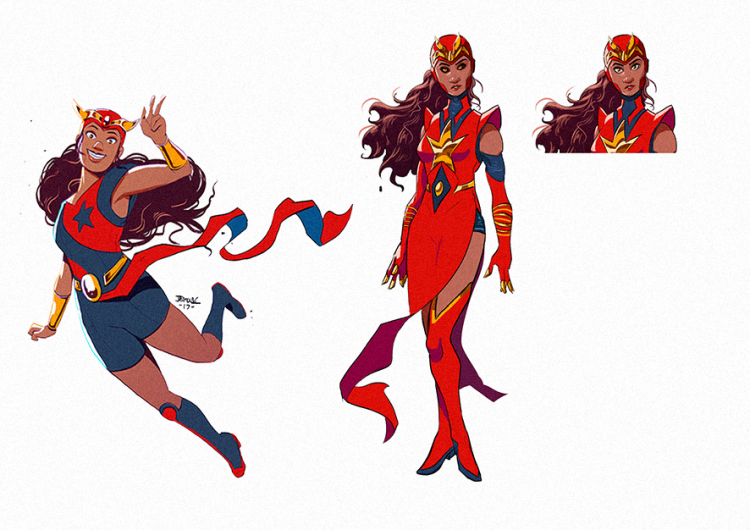 Darna—in her red bikini, red helmet, gold brasierre cap stars, and gold bracelets—has been a ubiquitous figure in Filipino pop culture. First created by Mars Ravelo and Nestor Redondo in the ’50s, different versions of this local heroine have appeared in TV shows and comics through the years (even in songs; what’s good, “Narda?”). Going through this long journey, have you ever wondered how Darna would look like in 2019? Well, artist Jem Bernaldez had his unique prototype. And it was almost published. Almost, but not quite.

“Once upon a time about two or three years ago, I was contacted by Adam David and Carl Joe Javier to work on a Darna komik pitch to be released in time with the movie,” Jem Bernaldez wrote on the description space of a Facebook album he named “Rejected Darna pitch” just uploaded last March 23.

Jem posted a collection of character studies and illustrations, and expressed how excited he was for this chance. Plus, the sketches didn’t need to exactly equate with the movie’s expectations. His pitch included a concept of Darna doing “time travel and meeting her future overlord self.” However, as the album’s name says, these creations were later on rejected. “Sadly enough until other producers and media people latched on the more it has to be in lined to the movie.”

The next Darna movie, directed by Jerrold Tarog, is set to be released this year.

Jem’s version of Darna supposedly looked like someone with darker skin and wavy hair.

However, according to the artist, the samples eventually had to change to a lighter complexion “since the movie people wanted to match her to Liza [Soberano] more.”

Here are more of Jem’s early concepts that include other characters and Darna comics scenes:

Quite a loss, but hopefully ideas like this one will still find themselves in the spaces of mainstream media soon. There’s nothing like a more realistic representation, especially for a superhero who’s deeply embedded in our culture.