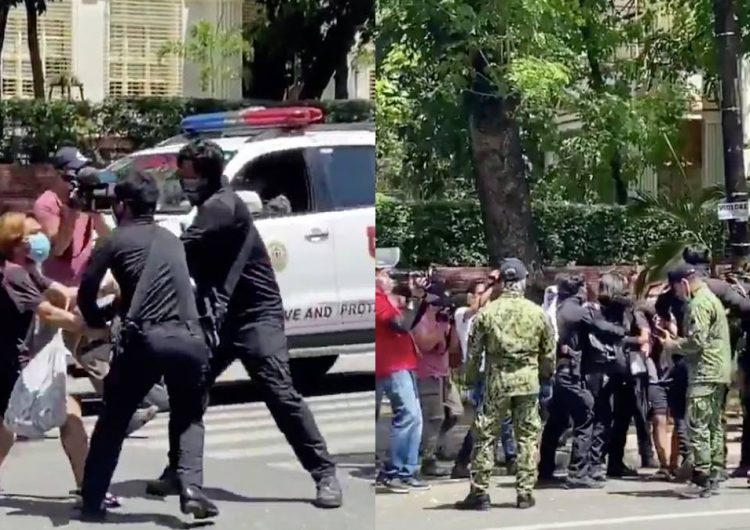 A Jun. 5 Anti-Terrorism Bill protest in front of the University of Philippines (UP) Cebu was disrupted when at least seven protestors were arrested by the police.

According to University of San Carlos’ Today’s Carolinian, the SWAT tactical team and UP Cebu guards had dispersed protestors rallying against the infamous bill after searching them for quarantine passes. Police cars were spotted in the area as early as 9 a.m. Some of these protestors were handcuffed and forced to board police patrol cars to be transferred to the Cebu City Police headquarters at Camp Sotero.

[THREAD] A few minutes before the scheduled 10 a.m. start of today's protest, police officers are already stationed in front of UP Cebu.#JunkTerrorBill#ResistAsOne pic.twitter.com/2iMQvyYLzn

“We gave them 10 minutes to disperse, but they did not heed our call. Hence, we decided to arrest them,” he said in an interview.

Included in the seven arrested were Jaime Paglinawan, chairperson of the Alyansa sa mga Mamumuo sa Sugbo-Kilusang Mayo Uno, and Joahanna Veloso of the National Union of Students of the Philippines. The latter was able to detail the arrest through a Twitter thread.

7 ACTIVISTS ARRESTED TODAY AT CEBU FOR PEACEFULLY PROTESTING TO #JUNKTERRORBILLNOW. Now, tell us to our face that we have nothing to fear if we are not terrorists when the police are arresting even civilians in a legal protest!! #ActivismIsNotTerrorism #OustDuterte #ACAB https://t.co/Llpl3fceoz pic.twitter.com/VAutJh7n56

Protestors and student publications have noted that these arrests show what they’re fighting against, as several have cited the Anti-Terrorism Bill’s possible threat to activism. “It’s raising questions as to how much further the state and its repressive forces intend to take their crackdown on activism and active citizenship,” writes Today’s Carolinian.

As a response, Twitter users have dubbed the arrested as the “Cebu 7,” trending the tags #ReleaseCebu7 and #FreeCebu7, calling for their release.

Are you enemies-to-lovers? Fake relationship? THERE’S ONLY ONE BED??

SHAREThe jig is up: The Marcos family is finding its way back to...