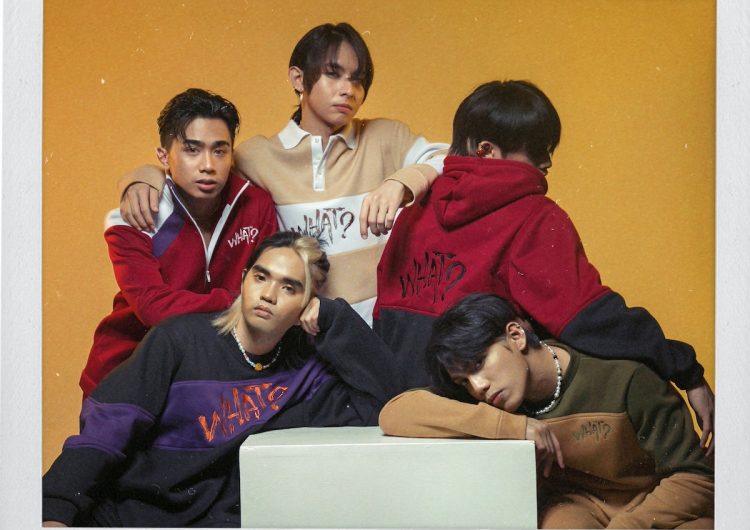 What’s in a ’fit? Suffice to say, it speaks a lot about a person—and the case remains the same for SB19’s very own fashion drop.

The P-pop group’s latest collaboration isn’t a shiny new track, but a fashion line they brewed up with local designer Chynna Mamawal. Inspired by their comeback single “What?,” the 10-piece collection takes cues from the members’ personal style alongside a dash of patriotic influence that’s almost a group staple.

The collection is divided into two sets, with Set A directly inspired by the Philippine flag’s color palette in streetwear form. Set B, on the other hand, peeks at the SB19 boys’ own distinctive flair, a product of the group and Chynna’s vision.

The line, which was originally scheduled for an April 22 drop, will finally make its way to online shores on April 24, 10 a.m. Each look is limited to 100 pieces and will “never be reproduced,” but the exclusive merch isn’t the only perk—each numbered ’fit comes in a premium customized box, along with printed postcards and messages signed by SB19 and Chynna. Plus, a chunk of the collections’ proceeds will be used to create PPEs for frontliners.

While we wait for these to hit the interwebs, take a peek at each members’ looks and plan your buying strat while you’re at it. (Wishin’ you luck, A’TIN.)

Pablo in Set A

Pablo in Set B

If you’re looking for a color that screams “leader,” then blue might just be it. The blue-and-white scheme in Pablo’s first set was a strategic choice for Chynna, who calls blue a color of “leadership” and “trust,” given Pablo’s role as the group’s lead. His bias for bold colors—namely, dark purple—is seen in his second set, mixed with his preference for comfortable and baggy silhouettes.

Justin in Set A

Justin in Set B

Both ensembles from Justin’s part take a page out of his usual clean and preppy look, added with a bit of a pop through the Philippine flag’s yellow. According to Chynna, the second set’s pieces are a direct request from the SB19 member himself. Set B, with its collared sweatshirt and khaki tones, is both a peek into Justin’s sunshine-y personality and liking for more toned-down colors.

Ken in Set A

Ken in Set B

Even the group’s proclaimed Best Dressed Member gets his style pegs from anime. Ken’s red-and-black ensemble is influenced by Japanese street style, although it takes functionality into account with its staple piece—the hoodie.

(My style depends on how I feel during the day. But I chose this since I’m really into hoodies. I like wearing them when I go out, and I thought to have them in this collection because it can be worn by anyone, wherever they go or what they’ll do.)

Josh in Set A

Josh in Set B

Josh’s red-and-white athleisure-like pieces are an homage to his adventurous style, as well as to his inclination for striking shades and silhouettes.

“I really wanted it to be striking. I didn’t want it to have any limits,” Josh said. “It can be simple na parang pwede mo gamitin kung lumabas ka lang. But at the same time, pwede mo siyang gamitin for other occasions na you can show off.”

(You can wear it if you’re just going out. But at the same time, you can also wear it for other occasions where you can show off.)

Stell in Set A

Stell in Set B

In the words of Stell himself, it’s a yes for us. His getup takes inspiration from e-boys, just as it said on the Justin-made PowerPoint they first presented Chynna. For Stell, his own style is more “basic” and comfortable—but he took this as a chance to experiment, as seen in the interesting cuts, from crop top-esque jackets to high-waisted pants. The finishing touches—SB19’s “What?”—comes in deep Philippine flag red.

Read more:
How does self-love in the apocalypse look? It’s SB19’s ‘What?’ MV
10 feelings while watching SB19’s ‘Ikalawang Yugto’ trailer
Find out your SB19 bias’ pop culture reco for you

SHAREThe MMFF lineup this year might have us cringing over commercial’s films lack...

SHARESouth by Southwest, or SXSW for short, is a music, art, and interactive...

SHAREWell, here we are. It was only a matter of time. Anyone who...