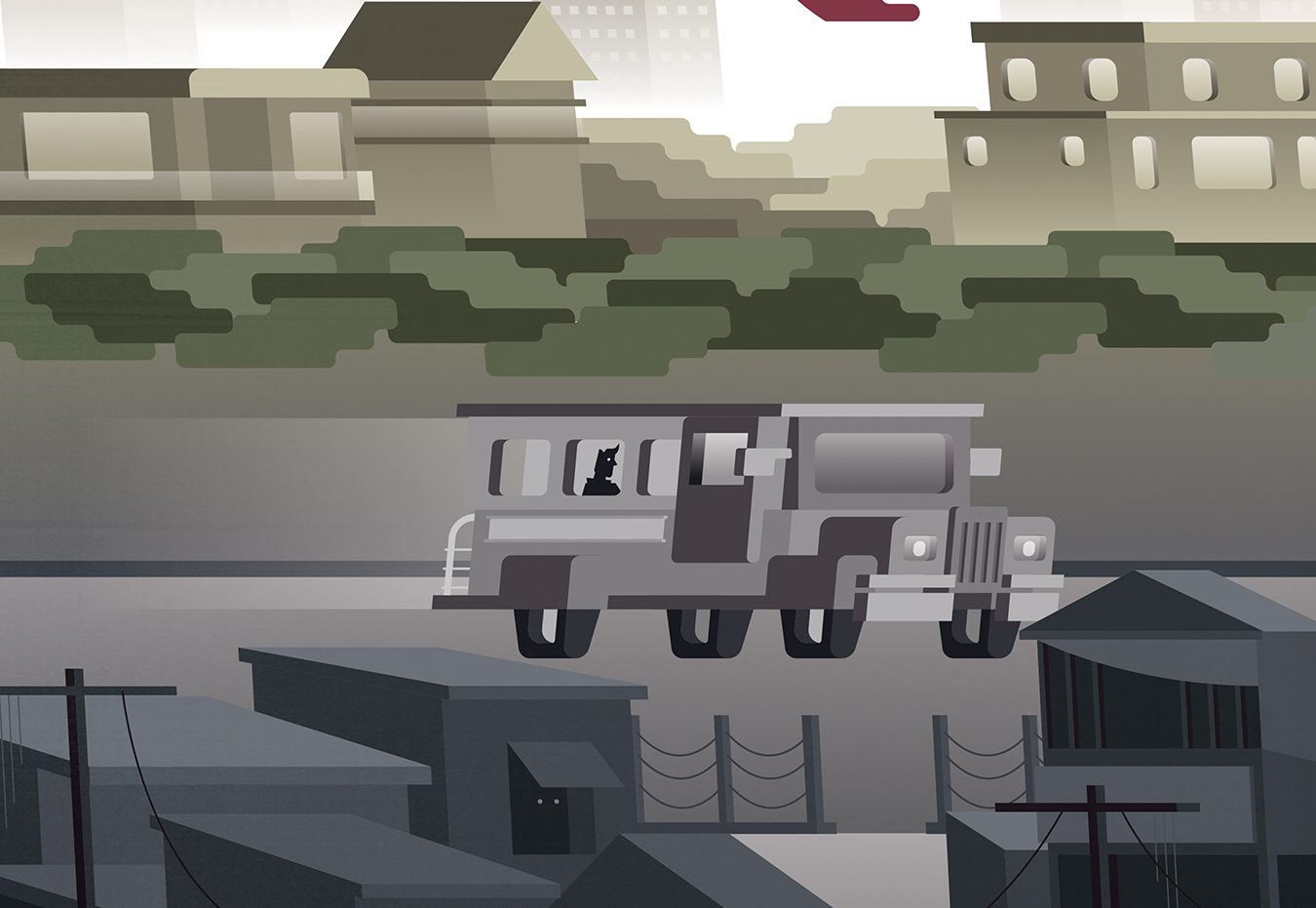 There’s a girl I adore, and she once described life as “beautimous.” I never figured out what it meant, but I presume it’s two words put together. The first, I was sure, had to be “beautiful.” The second I guessed was “tremendous,” maybe, or “polyamorous,” or perhaps, the slightly less interesting “glamorous.” In any case, she wore this viewpoint on her sleeve, or, more accurately, her Twitter profile.

“Life is beautimous,” the bio used to say. It was stated so matter-of-factly that I found it hard to disagree with. I admired her disregard for proper usage and took it for conviction. Life was beautimous, I said to myself, my mouth agape. I hadn’t thought of it that way.
This I remembered on my way home from work.

I had just completed the 96th hour that day, which meant I had 104 to go. To be granted my business degree, I’d been not required but “highly encouraged” by the state university I attend to enroll in a midyear course called Business Practice. It was simple enough: find a company that would take in my inflated resumé (I say this because it is engorged and made entirely of hot air), sign a few waivers, and assume my place as intern at one of their desks for 200 hours from June to July.

Because I’m a state-educated kid, I like to think that I’m left-leaning, an idealist with principles that might guide the way to life getting better in our country. My understanding of socialism is pedestrian at best. (The truth of this is warm and bitter and real, much like the Americano I had at a McDonald’s once while reading The Communist Manifesto. #Marxdo, I thought, trying to understand what it all meant. Later, I got up and bought myself an egg tart.) At the very least, I knew enough that the prospect of working for a corporation incited a minor kind of inner turmoil. Think of it this way—it’s hard to claim that the economy should service the basic needs of the public when your day job is to sell it a more powerful detergent.

Think of it this way—it’s hard to claim that the economy should service the basic needs of the public when your day job is to sell it a more powerful detergent.

Still, I had to get an internship for my degree, and even if the matter of graduating was not up for debate, I’d be lying if I said I did it only because I had to.

Before starting, I was excited and fascinated by the allure of corporate life. Despite my ideals, I still wanted to know what it was like on the inside. Not so I could run it to the ground a la Lenin (I swear, employers past, present, and future), but because I liked the order of it all, the neatness that it promised despite the conflict with my views.

Ninety-six hours into it, the allure had not faded. I was sure: I loved corporate. Didn’t like it, didn’t think it was a suitable career option. I loved it. The three-by-two-square-meter cubicle I called mine, the way the lights dimmed at exactly 12 noon, Miss Jenneth from Sales. I loved the matrices and the processes and the clarity of it all, and I loved Jennneth. Laymen would call it an internship but it was a job to me, my job.

The day I completed my 96th hour was a Friday, and everyone was in a Friday mood. We were given a talk on making business decisions in the morning and then, after sifting through the usual spreadsheets in my ergonomically designed chair, I left at the usual hour to make my way home. This way involves two malls and a bit of walking. Behind the first mall I board a jeepney that shuttles me to the next one. Once at that second mall, I take a tricycle that drops me off at my house, which is too close to be considered “out of town” but far enough that I’m routinely warned about the danger of small animals.

I arrived at the concrete lot behind the first mall, a dusty enclosure where all jeeps pass. It serves as both a parking lot and a station for different jeep routes, but really it was a shoulder of the adjoining major highway. For this reason, it could have been perfect for public transportation, had it not been for tropical heat and the enclosure’s shitty maintenance. But it was a Friday, and home beckoned me southwards.

Mine was just one of the many jeeps that boarded at this enclosure, joined by other routes that were vague and unhelpful in equal measure. Guadalupe might be clear to most people, but Gate 3 would confound even the most seasoned commuter. There were lines for each jeep that started at each route’s marked boarding point along the length of the enclosure, but these lines got so long and winding, leaving people impatient and squatting on the pavement. It was such that I had to tap a number of people on the shoulder to ask what route they were lining up for, until I found someone going the same route, and then follow that particular line until I found its end. I had to do this every time, and that Friday was no exception.

One of the routes that boards passengers there is called EDSA Forbes, after the sprawling expanse of wide roads and greenery where Makati’s elite resides. I am sure that the EDSA Forbes jeep boarded none of this village’s residents, the jeep likely skirting around the filthy and narrow roads that surround it instead. I was standing in line for my own jeep when I overheard an elderly couple ask where the end of the Forbes line was, enunciating the e at the end, long and hard.

The girl I adore once said she would only date someone whose car had a Forbes sticker. These stickers are issued by the village’s homeowners to residents and their relatives’ private vehicles, allowing them a way around the public access congestion and through the village’s wide, asphalted roads. This, while elderly couples and interns in slacks crammed themselves into jeeps which then crammed themselves into the designated single-lane roads. I agreed wholeheartedly, I remember saying to the girl that I adore. I wasn’t going to wait around while beautimous life passed me by.

I wondered then what she would think of these octogenarians hobbling from person to agitated person, waiting for someone to point them home. This couple would likely go on the rest of their lives skirting the edge of For-bes, not knowing of the grand expanse that awaited those who bore stickers. As someone from the middle class, I was exposed to both the expanse and the single lane roads that surrounded it, just beyond its walls and gates.

My upbringing and left-leaning views resisted comfort and beckoned me to fight, to tear down the high walls that separated rich from poor. But something else, something stronger than my ideals, wanted to leave the walls be. In a city where opportunities for social mobility are few and far apart, I was going to take the first one that came. Maybe, it only took 96 hours for me to fall in love with corporate because I had long ago chosen the stickers.

Equality should be a no-brainer. Because I grew up knowing only the single-lane roads, I still want to be able to serve the marginalized, to provide for the essentials that they are still deprived of. Here lies the classic dilemma—myself or others? When I was younger, there didn’t seem to be a need to differentiate the two. Faced with the realities of life at the end of the line for a jeep, doused in my own sweat, it seemed increasingly like I would have to choose—if not now, then eventually. Maybe when the time for deciding comes, I’ll make a choice that I can be proud of. In the meantime, I just really wanted to get in the damned jeep.

Faced with the realities of life, it seemed increasingly like I would have to  choose—if not now, then eventually. Maybe when the time to decide comes, I’ll make a choice that I can be proud of.

Someone in the line for Gate 3 had directed the couple to the end of their line, this person pronouncing the same long e at the end. It was getting dark, and usually this meant I would get to board my jeep soon. In the jeep, so tightly packed that my seatmates and I would have to negotiate arrangements to prevent us from falling to the middle, I would plunge deeper through the warm and bitter reality of where I’m from. Shanties that line the main highways obscured by a concrete wall maybe seven feet high are blocked off again by the shoulders of the people across me in the jeep. The truth of my city is far from the regularity of corporate life that I had compromised my ideals for. But no matter, because soon I would arrive at the second mall, where there’s no e in Forbes and maps outline which boutique is where. Only a little more until everything is brightly lit and beautimous again.

Nope, we’re not going anywhere, but we said goodbye to the weird, hellish...

Japanese Prime Minister Shinzo Abe just had the best Olympics entrance of all...