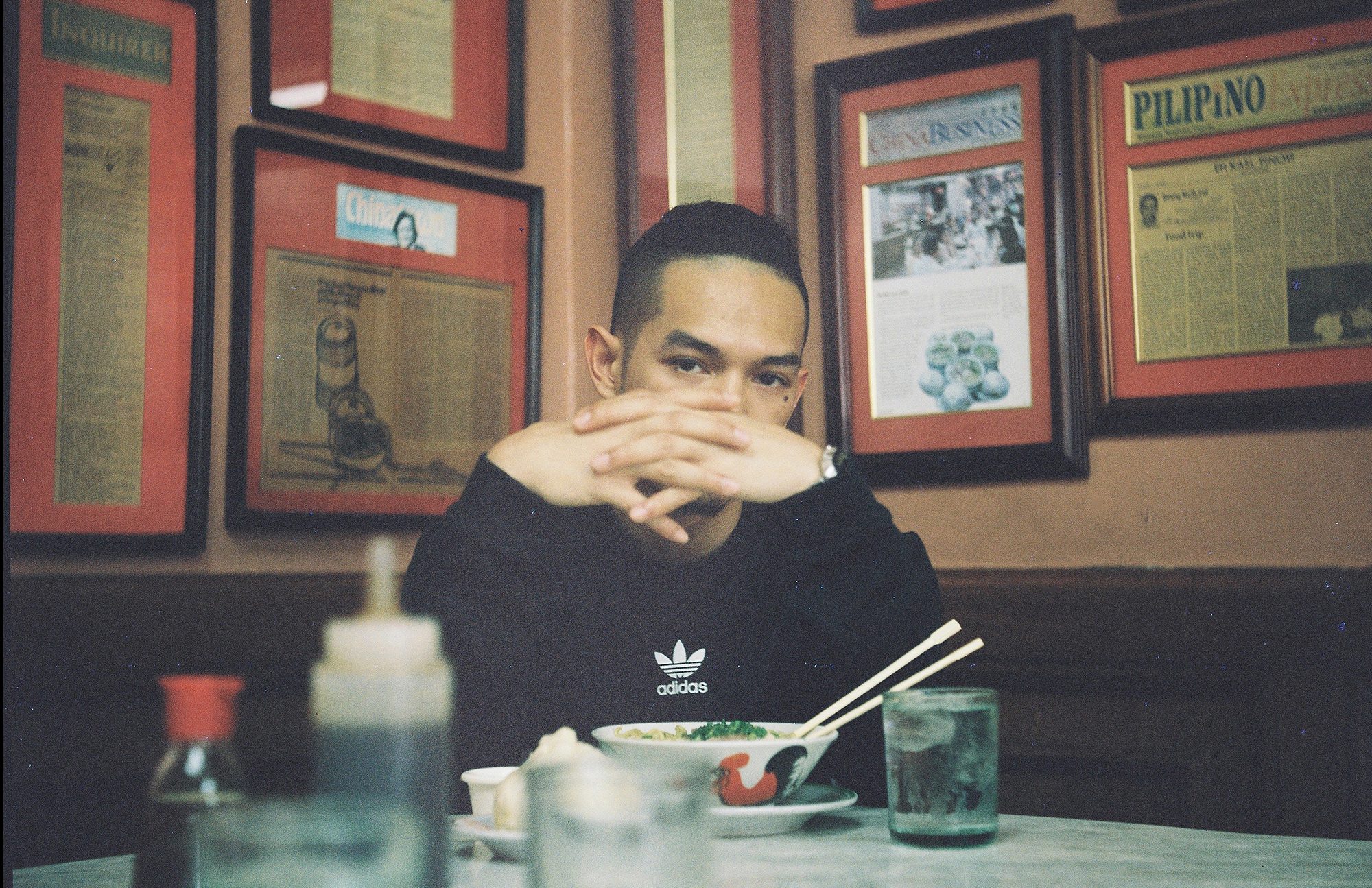 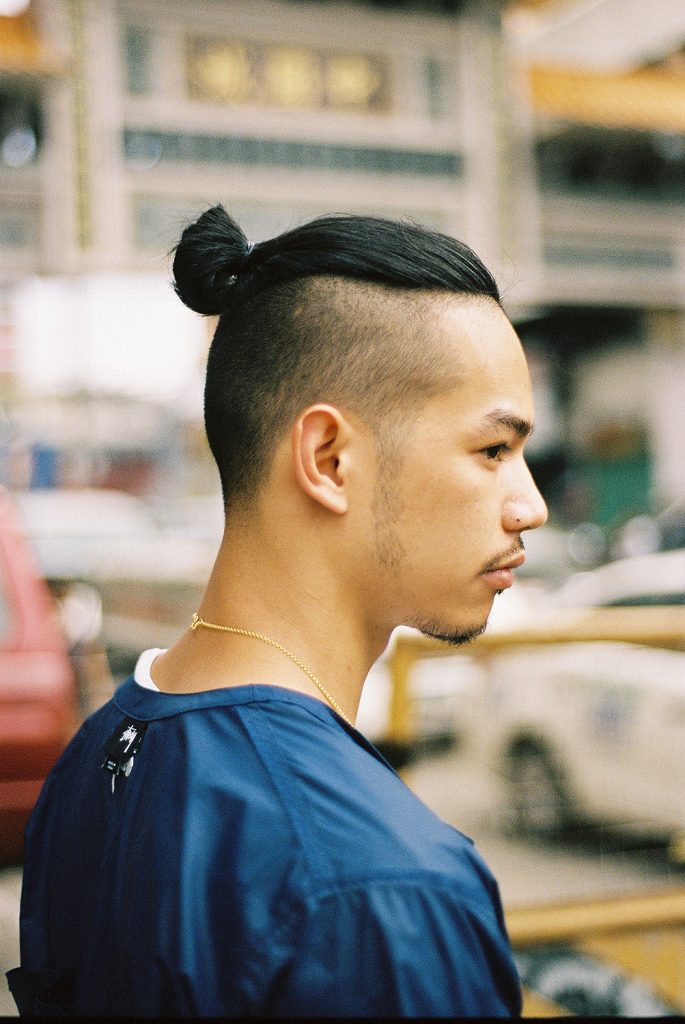 The tables were empty and the diners came and went quietly the first time I went to Ma Mon Luk on Quezon Avenue. Our photographer Geloy, graphic artist Grace, and my fellow editorial assistant Denise and I occupied a table too long for all of us to fill up, but this restaurant was where we decided to shoot, and this particular seat at the end of the table in the corner was where we decided for Eric Trono, or Kidthrones, to sit. It was an interesting juxtaposition: between two walls of newspaper and magazine clippings that chronicled the restaurant’s history sat someone who was definitely not yet born when these stories were published. For a place where history is the wallpaper, how can you stand out and not just blend into the backdrop?

The first time I heard Kidthrones’s music was when he was under the electronic trio DancePlayCreate (DPC) back in early 2014. They came to play on a quiet Saturday night to a thin crowd that was kind of dead to be honest. The stage was brightly lit, elevated a few feet, and propped with smoke machines; the three stood in the middle and hung their necks low, focused on their laptop screens, knobs, and buttons. Trono took the mic and as they blasted booming synths, he shouted, “What’s up S-O-H? We are D-P-C.” I got turnt that night, to say the least. My friends and I remember that night fondly thanks to that set.

“We just grew out of it,” Trono shares amid the conversational buzz pervading the restaurant. “It was mainly me, Brian Moya, and Matthew Azada. We grew separately because we developed different sounds.” Before venturing into electronic music, DPC was a post-hardcore band molded after the likes of Saosin and Chiodos during Trono’s high school days in Music Industry, a club under Ryan Villena of Techy Romantics. By “grew out of it,” Trono meant growing out of both DPC as a band, and DPC as an electronic trio. 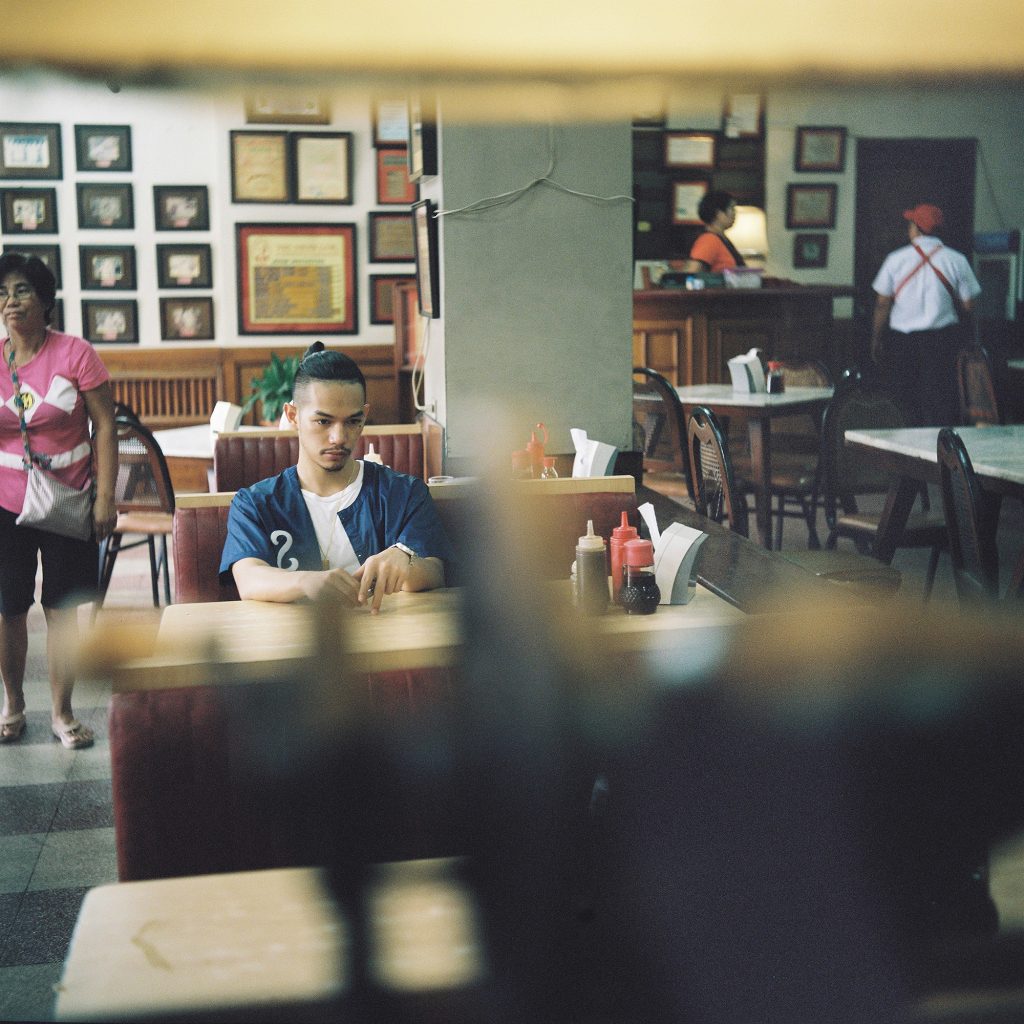 After the indefinite hiatus of DPC, Trono started his own solo project under the name Kidthrones, a play on his surname and his personal realization that he’s still a kid in the industry, a beginner, so to speak. “I put ‘kid’ on my moniker because it’s a reminder that I always have to learn, to be open,” he shares.

With the musical landscape changing dramatically due to the influx of bedroom producers and Soundcloud artists, so came the awareness of genre boundaries that are made depending on mood rather than melodic structure. A few years ago, several local artists, Kidthrones included, shared and reshared songs with no distinct geographical origin, definite classification, or even vocals to provide any context. It was music nonetheless, and with music like Kidthrones’ there’s no point in pigeonholing themselves into a certain genre. “[Kidthrones] is a lot of things, man. I think my music is a reflection of a time in my life, or a vibe that I captured at a certain period of time.”

[pull_quote] “[Kidthrones] is a lot of things, man. I think my music is a reflection of a time in my life, or a vibe that I captured at a certain period of time.”[/pull_quote]
Thus came the flexibility to explore his own sound the way he explores his own personal identity, as I’d like to believe. As co-founder of Logiclub, Kidthrones stands between artists who are also at the cusp of growth. “Pressure? Pressure to find your own sound, maybe,” he answers when asked if there’s a rush to finding his own sound. “But it’s an ongoing process, man. Each and every day you find something about yourself. I apply that to my sound.” 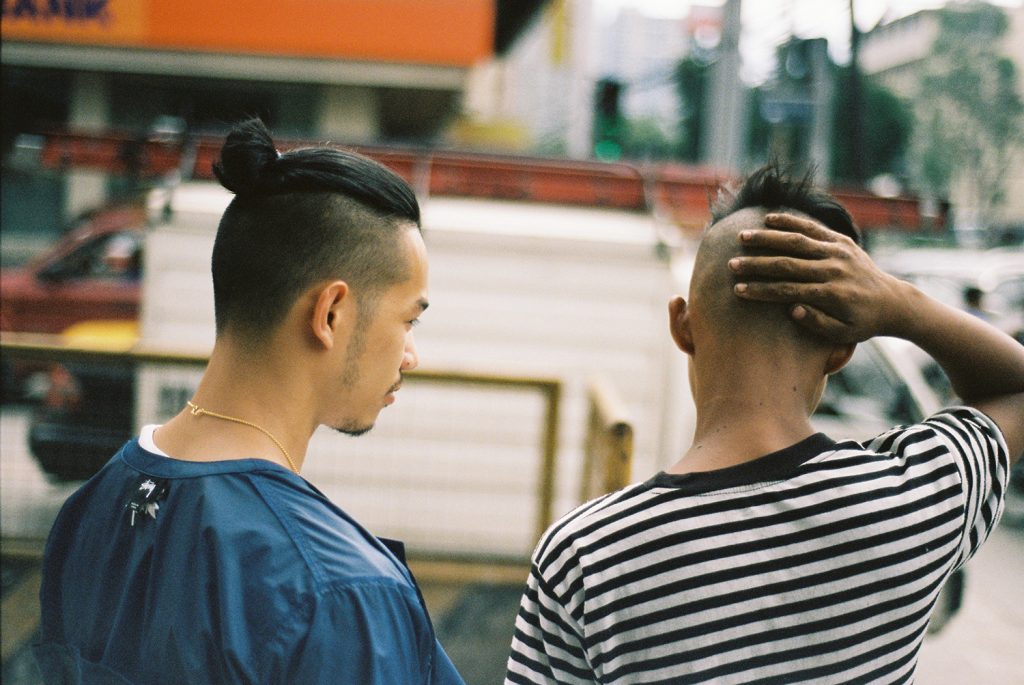 But along those constant changes and steady evolution of sounds, Kidthrones finds comfort in what he calls a “hip-hop, chillwave, Stones Throw kind of vibe.” At least, for the moment. During the fourth anniversary of Logiclub at Black Market, Kidthrones bookended the event with his own set. I vividly remember him playing beats with a defined rhythm, but structurally different melodies. Could you dance to it? The crowd tried, and I don’t know if they succeeded. It was different, and it was new and interesting for ears used to wait for slow build-ups and beat drops.

As he finishes his meal, he talks about tailor fitting his music to collaborators to create something entirely new. Snowflake Obsidian, a track he released featuring fellow Logiclub member Curtismith, is a good example of collaboration becoming his space for growth and his concern for his music to connect with an audience. Curtismith’s controlled voice accentuates the spacey synths and staccato percussions, maintaining a vibe that goes hard while staying laid-back. If anything, that’s where his sound is. “I think I’m maturing more as an artist because I get to work with different artists. My part in making the song palatable is getting the right person to do melodies with on the track or rap on it. For me, that makes the track pop. There are also projects that I have that I want anybody to hop on. I want it to be like that, talaga. Sometimes it’s really fun for rappers to hop on it because they bring their own style, own flavor, and the track becomes something else.” 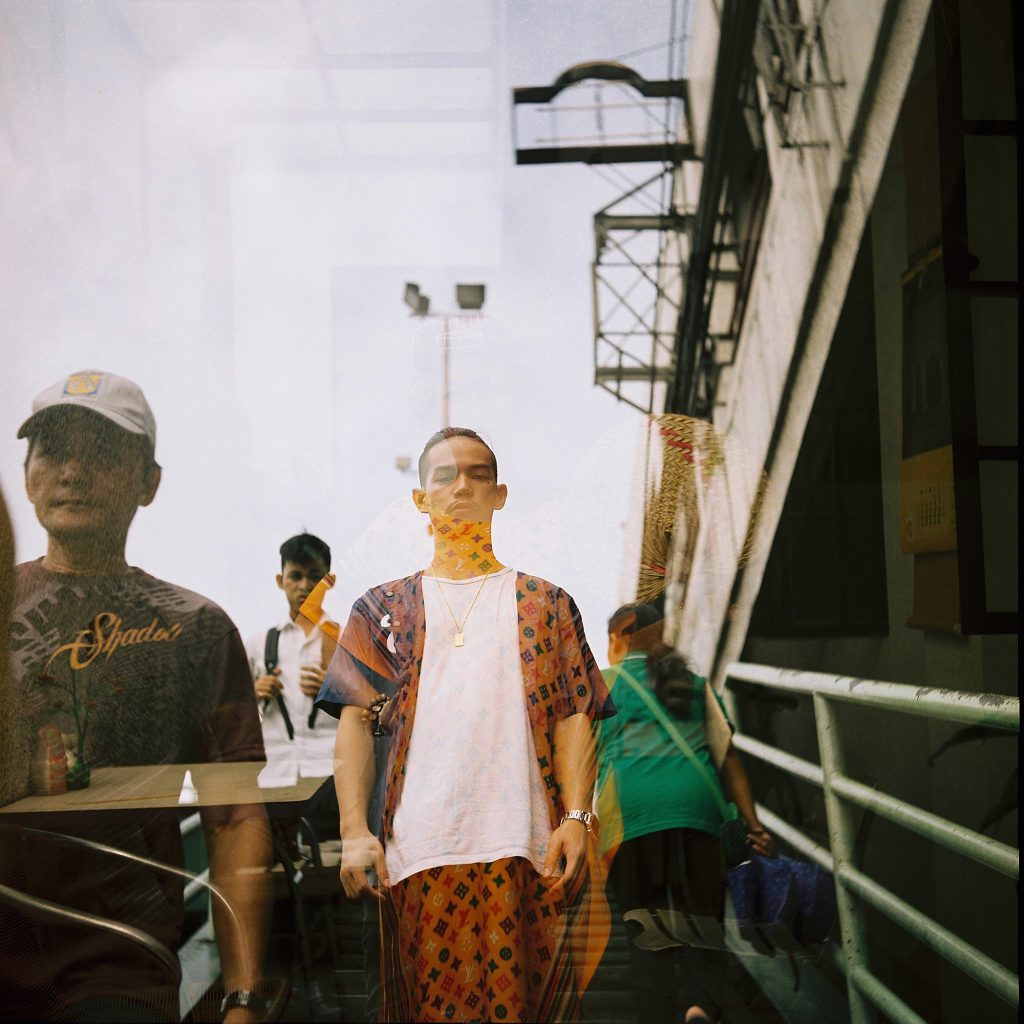 Nowadays, he’s fully committed to his craft, juggling his time working at the studio, playing at gigs, and making new music. It’s his full-time job, and he’s comfortable with it. “Recently I’ve been working a lot with Curtismith. He’s coming out with an EP, in which I have two tracks there. From the five project EP, two of those are mine. I also did a project with Ninno, which is cool. That shit goes hard. I can’t wait for that to finish. I’m also producing for this guy, J. Blaze.”

As trends come and go, the differing tastes from the digital native generation appear as shifting sands. Some keep their feet on the ground. Kidthrones rolls with the punches and moves towards the new whenever it reveals itself. But it’s safe to say that from the beginning, Kidthrones has never given in to trends despite hopping on what was new. It was all a matter of finding one’s wavelength and there’s admiration in keeping up with the times and not losing oneself. There comes the idea of being sure and confident in oneself that Kidthrones carries, from the way he acts and speaks to the music he puts out. “IKIGAI,” an EP he was supposed to release earlier this year at the Malasimbo Music Festival, was shelved due to him outgrowing it. He’s set to release a new EP entitled “Moods,” which was originally a full-length but after cuts became what it is. 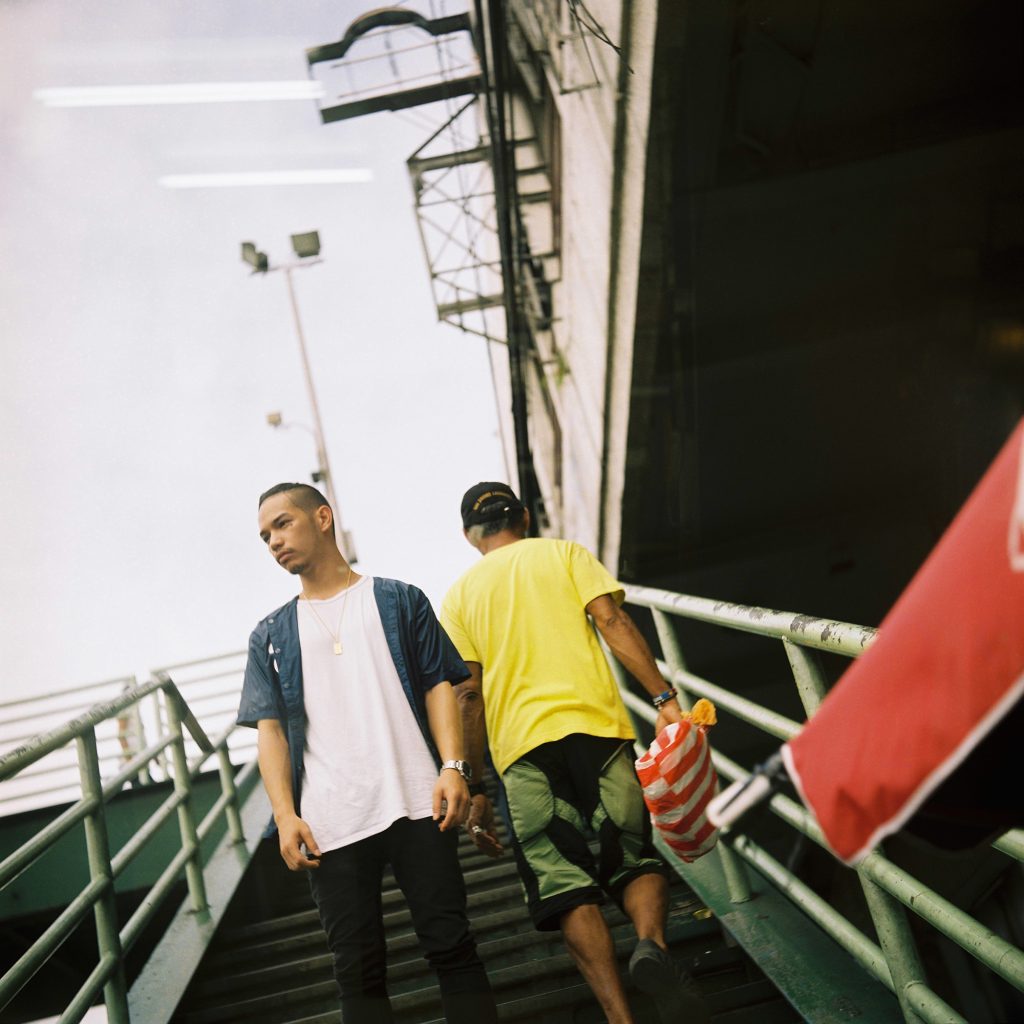 Before we leave the restaurant, he shows me his latest toy: a brand new SP-404SX, which he just recently bought. I caught a preview of his latest at Vibration Exercises last Oct. 10, where he shared his collaborative tracks with Ninno and Curtismith as well as his own solo tracks. It was exciting in that the tracks were more defined and well composed, and it seemed like he is settling on a sound—at least for now.

But there’s promise in an artist who knows himself more than anything, who can both create new music with different artists while maintaining his own name, who can rise with the trends and come out on top. “As you grow up, hype’s nothing, man. It’s really the art that speaks for itself,” he points out. “I’m leaning towards that future. I just gotta release these tracks.” Which future? He doesn’t exactly say. Against the backdrop of a history set in indelible ink, Kidthrones’s pen is still wet. Something’s always on the come up for someone who doesn’t settle.

This article was previously published in our November-December 2016 issue.

SHAREBy Stan Sy Carly Rae Jepsen is back with a new single that...

SHAREHave you always been fascinated by Parisian art but haven’t had the chance...

SHAREYou might be spending Valentine’s Day alone, but this frog isn’t. Should that...