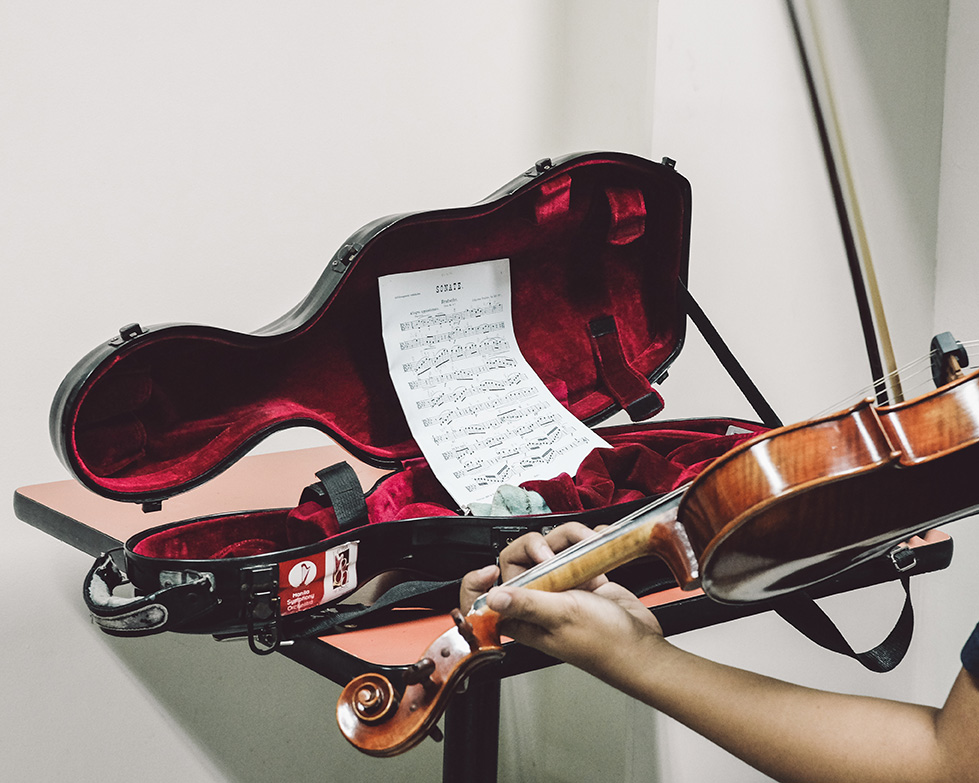 There’s a pivotal scene in the web series Mozart in the Jungle, where the main character, Hailey Rotledge, drops everything just to try her luck at a classical music audition. “I feel like all I spend my time doing is figuring out how to make money and be a good daughter, and none of it is about the art,” she laments beforehand. She’s been using her time efficiently by attending concerts, teaching oboe lessons to a younger musician, and practicing nonstop. She’s keeping to this rigorous schedule so she is ready when a slot in the New York Symphony opens up. She lives in a fictitious world, but her struggles are real. For some young musicians, playing in an orchestra is more than a logical step in their musical development. It can be a necessity both professionally and financially. When I found myself backstage at a classical music concert, I found out why.

It was a Saturday evening and the theater was still empty. This was going to be the first time that I would be attending a classical concert, so I made it a point to arrive early. Outside the theater, Bach Vs. Beatles concert programs were being given out. A few other guests were walking around or talking amongst themselves. Nathan, my photographer, started taking candid shots of people while the pre-concert sound checks were going off inside. I was waiting for someone from the Manila Symphony Orchestra to appear. But when no one showed up, we decided to go backstage to see if anyone was there.

The Manila Symphony Orchestra or MSO is one of our country’s longest-running and most historically significant orchestras. It was part of the resistance during World War II, when the members refused to play for the Japanese. Now their mission is honing young classical musical talent through a number of different concept performances. One of those concepts was the Bach Vs. Beatles concert we were attending tonight.

We slowly made our way to the back, and thankfully the stage door was unlocked. Inside we could hear the faint sound of an instrument playing. But what I remember the most was the laughter that immediately followed.

The laughter came from a group of young orchestra members seated near the dressing rooms. One of them was playing a classical rendition of a Dashboard Confessional song on her flute, which had been playing on the event speakers. On the far end of the stage, there was a violinist practicing by himself. Near him, there was another group of musicians talking. The atmosphere was easygoing, and the musicians did not mind us that much even though we took a lot of pictures. Shortly afterwards, the stage door opened again and Mr. Jeffrey Solares welcomed us.

Jeffrey Solares was the resident conductor of the Philippine Philharmonic Orchestra (PPO) before becoming the executive director of the Manila Symphony Orchestra. After welcoming us backstage, he gave us a few insights into what the MSO would be playing tonight. “Last season, we performed the Bach Vs. Beatles collaboration many times and the audiences loved it. There were even times where the audience would sing or hum along. For some tonight, it would be the first time to hear these songs performed with an orchestra. Some members of the Orchestra would be playing their first concert with us tonight, and I’m glad that we are starting the season with Bach Vs. Beatles. After all, who doesn’t love the Beatles?”

According to an article in the July 2012 issue of Boston Magazine, about how to get in the Boston Symphony Orchestra, “the classical audition ranks among the world’s toughest job interviews.” I ask Jeffrey for his thoughts on that statement and he replies, “Yes, auditioning for an adult orchestra like the MSO is no easy feat.” He tells me that each member is judged on several requirements: the quality of their musical tones (steady periodic sounds), their intonations (pitch accuracy), and how well they can adapt under pressure. “Sometimes we just lay a solo piece in front of them then ask them to rehearse with us that evening.” He also says that during auditions, a screen is put in front of the musician to dissuade the judges from biased decisions. “It is a tough process because these are musicians with years of practice under their belts. It is a lot of pressure because they are asked to play for just a few short moments. But if you can get in, it will be worth it.”

[pull_quote]“Auditioning for an adult orchestra is no easy feat. These are musicians with years of practice under their belt, and they are asked to play for a short time. But if you can get in, it will be worth it.”[/pull_quote]

But after being accepted in an orchestra like the MSO, you still have to prove that you belong. “The new musicians practice with us until they get tenure, which means that you are officially a member of the orchestra.” Jeffrey mentions that orchestral work can be a full-time career if the musician is willing to dedicate time and hard work to perfecting their craft. But aside from the financial benefits that an orchestra brings, he also tells me that there exists a mentor-student relationship within the MSO. He says that this relationship is essential if you want to grow as a professional musician.

The 2014 film Whiplash presented the visceral idea that auditioning for a musical position would mean risking life and limb. The film followed an aspiring jazz drummer who practiced day and night just to appease his conductor. But Jeffrey assures me that those extremes aren’t true. “We might practice until the early morning just to perfect a piece or movement, but we don’t want anyone to burn out. The musicians are our first priority.”

But burning out is a very real thing, especially for those that have been playing music most of their lives. A study from the ‘90s conducted by Richard Hackman, a psychology professor at Harvard, focused on orchestra musicians. Surprisingly, they didn’t rank high in the job satisfaction index. “The job satisfaction of orchestral members ranked just below federal guards and air traffic controllers, whose work was wildly stressful.” But it is also notable to point out that the same study concludes: “No group that we studied has more internal motivation than [orchestra musicians].”

When asked if that last statement was true, my friend Poch Gutierrez says, “I believe so, because practicing does take up most of our time. But it’s all worth it.” Poch has been playing the cello since he was 12 and held seats with the Lasallian Youth Orchestra and the Ateneo Blue Symphony Orchestra in college. He now works as a full-time high school teacher in addition to his playing career.

When asked why he thought it was worth it, he continued by telling me his craziest experience inside an orchestra. “The craziest thing would be the time the Lasallian Youth Orchestra had to travel to Zambales from Manila after a concert. It was supposed to be a retreat but we were still so high on our performance that we couldn’t sleep. We all decided when we arrived to practice instead. We got there around two in the morning and we practiced until the sun rose. I remember those sessions were passionate and full of heart.”

I ask if he would think about joining an orchestra again if he had the time. Poch says, ”Definitely. When you are with a group who loves playing as much as you do, practicing is fun. Listening to each other play is a big part of it. I call these moments ‘beautiful chaos’ because imagine this: everyone is playing different instruments and everyone is playing at the same time. You have 60 musicians in one room playing to create one sound. It is surreal how good it feels to experience that, to be a part of that. That’s beautiful chaos. But I guess you can say that about all music in general.”

Back at the concert hall, people are slowly being let in and asked to find their seats. Before going to mine, I ask Jeffrey what the MSO was going to perform first. He smiles and says, “Bach, of course. Everyone knows the Beatles, but after the concert, I am hoping that the audience will love Bach as well.”

Once the orchestra members had settled into their seats, I noticed that they all looked different from what I remembered hours before. They did not look fazed at what I saw while standing onstage: rows and rows of once empty seats now filled with faces they did not know.

One particular thing stood out from the beginning was the respect the conductor, Mr. Arturo Molina, gave his musicians. Before he began Bach’s first piece, The Double Violin Concerto, he would shake the hands of the musicians seated nearest to him. Then he would nod at the violin section that would start the first movement. In the short breaks between pieces, the conductor would pause and give the spotlight over to the soloist, if the piece had any. This small gesture, which I learned from Jeffrey afterwards, was commonplace. “In these concept concerts, we try to give each musician their moment to shine.”

Over the course of the concert, there were no extravagant theatrics, no Whiplash-inspired moments. There was just well executed music. Even if I did not know the technical intricacies of the orchestral pieces, they all spoke to me in some unseen way. But call me a sucker for the Beatles songs. Because when you hear a classical rendition of Blackbird being played as gracefully as that, it is really difficult not to get emotional about it.

This article originally appeared on the April 2016 issue of Scout.

SHAREMoon Mask’s precursor to their upcoming EP landed yesterday. Their track “Boulevard” is...

SHAREThat thing you heard about nothing in life being certain except for death...

SHAREPhysical distancing may require you to stay within a six-foot radius from anyone,...