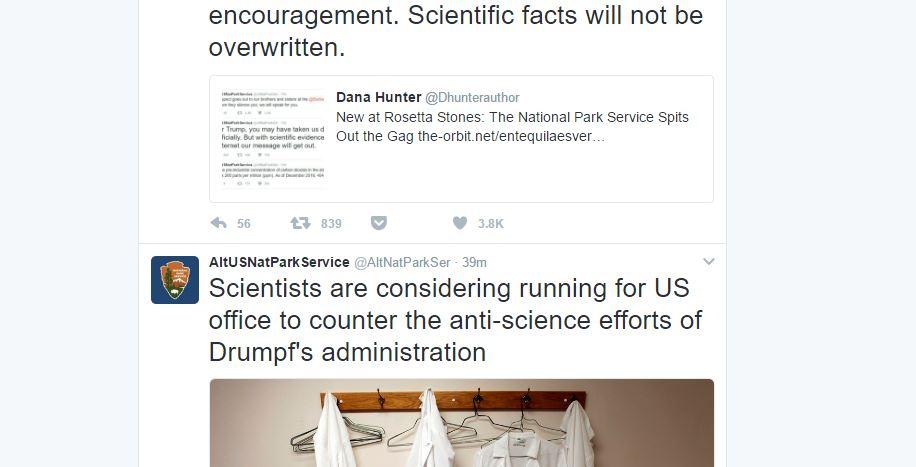 If, by any chance, there were any government agencies over here that didn’t necessarily align with the Duterte administration’s pro-alternative facts stance (we did it here before it was cool to do it in 2017, y’all), then they could choose to do what the US’s National Park Service (NPS) is doing right now and really go rogue on Twitter.

After tweeting some climate change facts that were deleted (the Trump administration is scrubbing away all references to climate change on the White House website, and other online government assets. That’s just the beginning, though, as other pages about progressive issues and policies are apparently set to go kablooey too) the NPS apparently started setting up new alternate Twitter accounts. It’s already pretty badass, look:

Can’t wait for President Trump to call us FAKE NEWS.

You can take our official twitter, but you’ll never take our free time!

The only way this Twitter revolt is happening, however, is probably because the NPS hasn’t transitioned yet and filled with pro-Trump staffers. If that’s the case, it should only be a matter of time until the change is made, but that shouldn’t stop the people running the account now from continuing to do so even if they’re no longer affiliated with the agency.

Now if there’s anyone like that at all in the staff of our own local agencies, now would be a good time to help combat the skulduggery of this government. Maybe we can start with the PNP?

SHAREForever is the most criminally underrated, if not the best, song in “Palm...