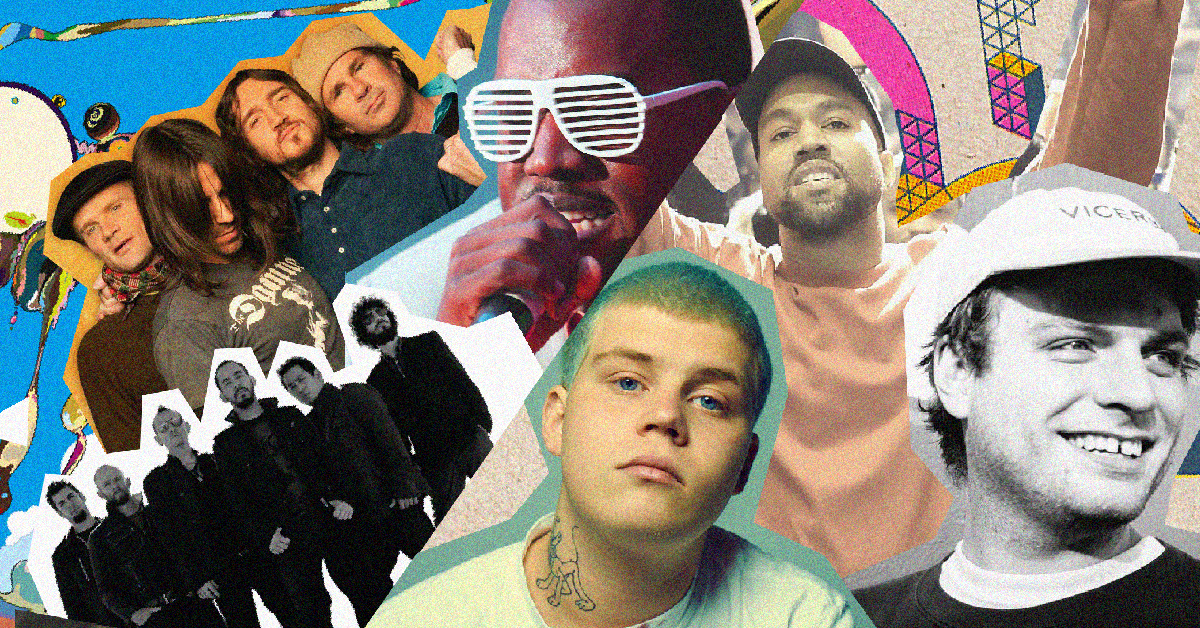 Yesterday I was on my way home in my Uber, listening to Migos (again), when my driver plugged in his Aux cord. And then, despite Quavo’s staccato raps, I could hear something distinct playing over the car audio: Brendon Urie’s unmistakeable voice, singing “I Write Sins Not Tragedies.” Oh shit, I haven’t heard this in ages, I thought.

And then he played some Red Hot Chili Peppers. And then some Fall Out Boy. And then some Sum 41. All the songs I don’t have on my phone but the lyrics of which I still remember to this day.

Let’s start with me, a self-proclaimed hip hop head.

I had zero music taste 10 years ago. Zero. I wasn’t even really into music back then in the sense that I only listened to singles and not albums. And I don’t know what happened with the rock to hip hop switch. But maybe it’s not that apparent aside from Kanye West sticking. But that’s Kanye. Would I listen to my old favorites? Hell yeah.

And then I asked other people:

Top 5 Albums I Like Now (Ang hirap nito ah haha)
Marianas Trench – Astoria
The Summer Set – Stories For Monday
letlive. – The Blackest Beautiful
LOLO – In Loving Memory of When I Gave a Shit
Catfish and the Bottlemen – The Ride

“As you can see, I never grew out of that rock phase I had back in elementary and high school. I wasn’t a big listen-to-the-whole-album person before and only went with what was mostly playing at home (yes, Linkin Park was almost always on full blast) and what my classmates liked to listen to. Now, you can say I’m more exposed to a lot of genres now, but I’m still very much attached to rock music―pop punk, pop rock, post-hardcore, metal, all that shit. But if I want to slow down, I’d turn to chill indie and pop albums.”

“I still listen to them and some of their singles are still on my iTunes and Workout/Cardio Playlist. lol.
Pero ang weird, I now prefer old songs.”

Top 5 Albums I liked 10 Years ago
Paramore – RIOT! Fall Out Boy – Infinity On High
Death Cab For Cutie – Transatlanticism
Avril Lavigne – The Best Damn Thing
Evanescence – Fallen
Top 5 Albums I like Now
Her – Her Tape #1
Takuya Kuroda – Rising Son
A Tribe Called Quest – We got it from Here… Thank You 4 Your service
The Kills – Blood Pressures
Metric – Live It Out

“I still work the same way, except instead of Limewire, it’s Spotify or Soundcloud or Youtube or something because the internet is a wonderful thing and I have money now so I can afford to stand by my morals and pay for an album if it isn’t available to stream online. I take in recs from friends or online/offline publications too instead of just listening to whatever’s the radio. This means I listen to a TON of stuff now, making it incredibly difficult to narrow my taste to just a list of Top 5 Albums, but here’s a bunch of things off the top of my head that I haven’t gotten tired of yet, I guess?”

Top 5 Albums I liked 10 Years ago
Bon Iver – For Emma, Forever Ago<
Arcade Fire – Neon Bible
Feist – The Reminder
Amy Winehouse – Back to Black
Tegan and Sara – The Con

Jamie xx – In Colour <
Robyn – Body Talk
Carly Rae Jepsen – Emotion
Beirut – The Rip Tide
“I suppose at the core of my musical taste are emotional vulnerability and catchy melodies. That’s probably why I’m able to listen to an eclectic range of artists, as long as I hear a good hook or some form of helplessness in there, then I’m bound to like it. Most of the choices here lean heavily towards pop–it’s not a bad thing, really–although I’m keeping my eyes on Khalid, RAY BLK, and Billie Eilish.”

“I would like to thank our local music channels for influencing my early music tastes. I didn’t even listen to anything that didn’t have a music video. A few years later, I found out that you can actually get music from the internet, a few more years after that, I found out about 4chan’s music board, /mu/. Thanks, moot.”

“It was so hard listing down the albums from 10 years ago! (Memory gap much?) Mostly because at that time I didn’t pay that much attention to what I listened to; my music taste was dictated by what I heard on the radio or saw on those countdown shows on TV. I only started really “researching” about songs and artists when I started getting into J-pop. Getting into a bunch of different fandoms (within and outside J-pop), and getting to know more people since then, especially in college, has obviously changed my listening habits. Now I’m more open to a wider variety of genres. Though honestly I check playlists now more than albums. That’s not a bad thing, right?”

“Somewhere along the way (but also really thanks to iTunes Essentials, and later on, Spotify) my tastes shifted heavily toward hip-hop. I still like most things I used to like, though, and I’ve delved into a lot of different, although admittedly traditional, genres.”

Top 5 Albums I Liked 10 Years Ago
Panic! at the Disco – A Fever You Can’t Sweat Out
Fall Out Boy – From Under the Cork Tree
Paramore – All We Know Is Falling
Evanescence – Fallen
The Hush Sound – Like Vines
Top 5  Albums I Like Now
FKA twigs – LP1
HONNE – Warm on a Cold Night
Majid Jordan – Majid Jordan
Baths – Cerulean
The 1975 – The 1975
“My teenage angst has now completely disappeared, so I guess, so has my love for rock bands–with the exception of The 1975, who are more pop. Now I just listen to music I can vibe to, or fun music like K-pop! When you start working, all you want to do is relax or have a good time! My favorite genre at the moment is electronic/alternative R&B (or actually, just R&B in general). If it sounds sexy or chill, then I’ll probably love it.”

Why has our taste in music changed?

I don’t know why specific albums stick with certain people over the years, but when it comes to changing our music taste I think it’s more about us growing up to learn more about new music than us getting sick of what we like from before. The internet has widened our music horizons, giving us more avenues to explore new music.

Based on the answers our music tastes now are much, much richer than 10 years ago. Am I saying music from 2007 and beyond are trash? Nope. I’m just saying we don’t have to rely on the top of the pop charts to find out what we like. It’s not weird to listen to The Beatles first and then XXXTentacion next.

Other than that, we just grew up.

SHAREYou know what they say, birds of the same feather flock together. In Oh,...