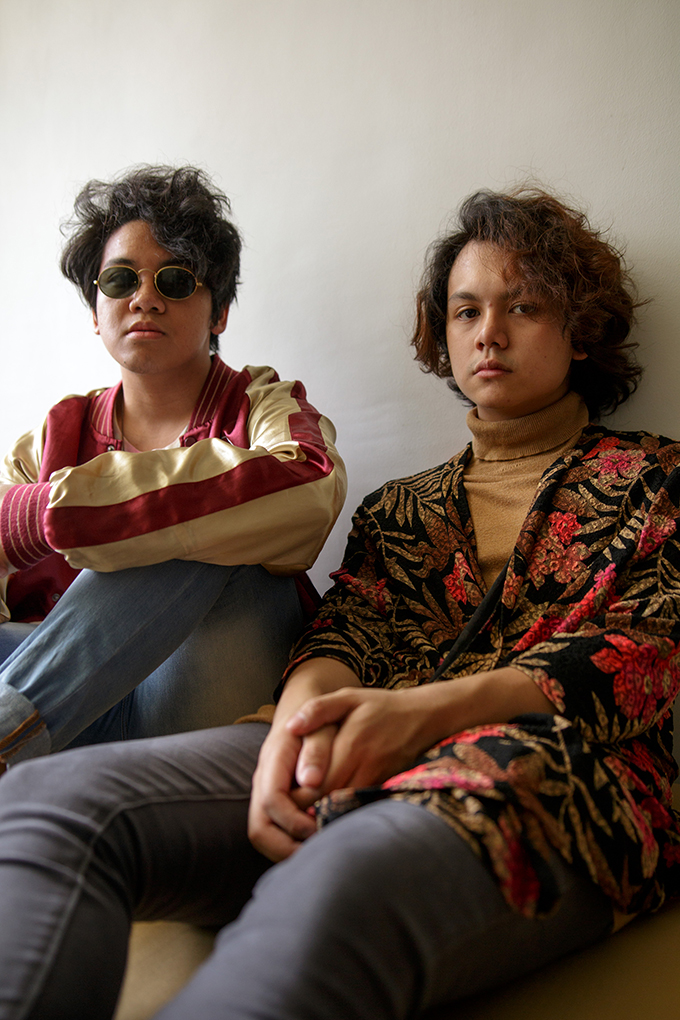 When you were trying to understand Daria’s comebacks or flipping through Marvel comic books in your room where your Nirvana poster hung, Zild Benitez was in a storytelling competition, explaining to his fellow grade-schoolers how a mythical bird once pooped on a prince and turned him to stone. He would narrate, in rehearsed singsong, the epic of Ibong Adarna for a competition. He’d place runner-up but preferred spending afternoons in the arcade playing “Wangan Midnight Maximum Tune,” where he and his friends obsessed over driving virtual vehicles and overtaking each other.

Somewhere in the South, Tim Marquez was training to be a top jock. At eight, he played with the Army Football Club, gearing up for a lifetime career. But on days he wasn’t scoring goals, he’d hang out with his two older brothers, probably swimming or taking dance lessons. When those got old, he’d retire to his room to play Age of Empires; or kill Orcs in Lord of the Rings. He gained weight—his downfall as an athlete, he thought—and had to rethink his next move. 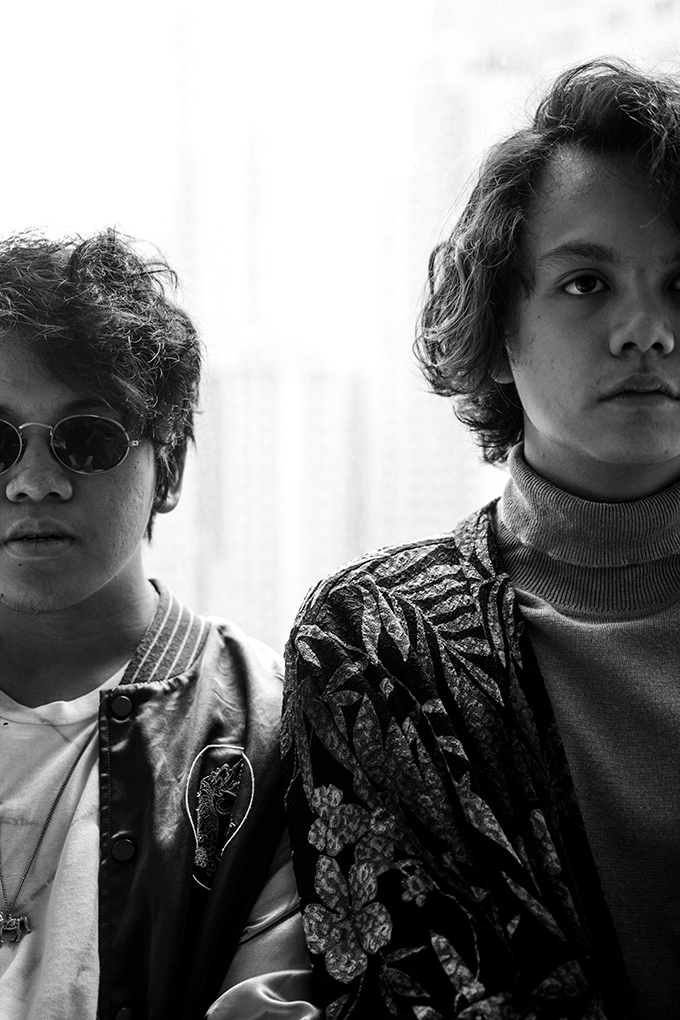 Years later, on Oct. 2, 2016, the song “In the Night” dropped on YouTube. Obscured in silhouettes, two guys slowly swaying to synths sing—in warped voices—about falling in love at 18 as they mime the desperation that goes with it. All ears are on this ’80s-inspired, nostalgic showcase as the artists, in a rare occasion, coolly sidestep. The song is an elaborate introduction of to Tim and Zild of Manila Magic−once the teenaged dorks, now the indie scene’s newest electronic duo that haven’t even hit their 20s.

It’s 40 minutes past 1 p.m. when Tim, Zild, and his girlfriend Shanne knock at the door of this spacious loft where we’re meeting. Their car broke down on the way here and yet, even in their hurry, they seem chiller than you think they’d be. Tim walks in first, striding to the laid-back sounds of no rome’s “Seventeen” resonating in the room. He wears a peach bomber jacket and has his round shades on. Zild, just a few steps behind, runs his fingers through his curly, floppy hair before offering handshakes to those interested.

Apart from their faces, their shy swagger gives them away. The pair’s debut song was in the pilot of gay Filipino web series Hanging Out; they were finalists in Wanderband 2017; and they opened for Canadian act BADBADNOTGOOD last November. Tim and Zild are 18 and 19 as of time of writing. And they happen to churn out music of a bygone decade revisited by the likes of The 1975 and Carly Rae Jepsen. Their youth is an advantage, but it has also become a source of doubt.

“To be honest, I feel like there are people looking down on us a bit,” Tim says, now lounging on the couch with Zild listening closely. “They underestimate us because of our age. I don’t know, is it the way we look? Is it because we’re kids? Sometimes, I don’t feel welcome in the scene.”

“Neither do I. Especially when you’re young, they’re like, ‘Oh, don’t try to enter this scene. We know everything,’” Zild says. “Everyone hates young kids.”

Wild guess? Most do because they’re perceived as threats. They either maintain traditions or break them. In Tim and Zild’s case, other people’s perceptions have been off-track. Unlike other musicheads, their origin story doesn’t consist of New York upbringings, flashy interests, or some other grand reality. It’s a start carved out of the ordinary.

“To be honest, I feel like there are people looking down at us a bit. Is it the way we look? Is it because we’re kids? Sometimes, I don’t feel welcome in the scene.”

Zild was a top two student back in Don A. Roces Sr. Science-Technology High School, where computers “got him in a nonsense world.” Before that, he was a competing storyteller who had time to play some bass and write songs on the side. 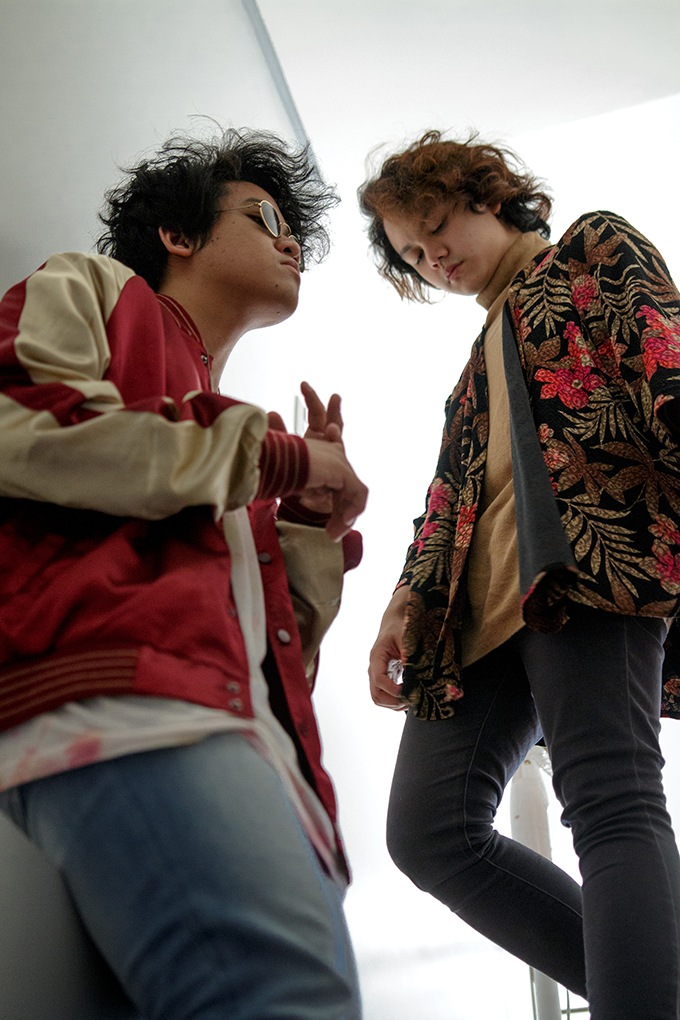 Tim was homeschooled and spent free time playing video games, practicing lessons, and requesting music on the radio. He would even record Chamillionaire songs on his Nokia phone. “Dweeb!” Tim jokingly calls himself and Zild, in the middle of telling me how their childhood went. “Ano ba yan, walang sweg!”

But their transitions to music—and coolness—came easy. Zild’s dad, Franklin Benitez, was a drummer in the ’90s for Hungry Young Poets, a band led by Zild’s godmother Barbie Almalbis. His childhood, when he wasn’t in arcades, consisted of catching OPM bands live in Metrowalk and Araneta. At home, the vibe was similar.

“My dad’s not directly producing music but it was just him listening to songs and some kind of music,” Zild recalls. “It became normal in my house. Every time, he’ll listen to some Toto or anything jazz, pop, or even funk. I just liked it.” Seeing how he hung out with other musicians—just listening to songs and talking about how good they were—has convinced him that this is where he wants to be.

Tim thinks he got some of his talent from his dad. While Tim’s father isn’t a musician—he’s a manager in a telecom company—he taught himself and his kids guitar and a few other instruments. While Tim was slowly easing in and out of football, he had been thinking about taking up and making music. It started as early as when he was six.

“I remember composing a tune called ‘Dolphins on the Way.’ My goodness, it’s on the piano,” he says. “I just tried composing ’cause we had a piano at home. I called it [that] because it sounded like dolphins. I remember, when [my folks] heard it they’re like, ‘You’ve got talent, boy!’”

Today, Tim and Zild are on scholarships, studying music production in De La Salle-College of St. Benilde. They’ve also been playing for their own pop rock bands: Tim is the songwriter/drummer of One Click Straight, and Zild is the vocalist/bassist/songwriter of IV OF SPADES. Manila Magic is an accidental outlet—thanks to a detour from a project for Bible study—for music that doesn’t quite fit their bands.

The name, an iteration of the Commodores’ 1979 album Midnight Magic, is a playground, a dumping ground for creative juices prompted by listening to their current faves the Bee Gees, Slipknot, or George Duke. And like in an actual playground, other people are either looking to play or frowning at the fun. Online bashers have accused Manila Magic of having “no originality.” “Everyone is influenced by something. Nothing is new under the sun, boys!” says Tim—but their new fans are already calling them the future.

Either way, the music goes on. They may be drowned in shadows in their first video but there’s no hiding the guts screaming at the forefront. Manila Magic, while decked in millennial fashion, is free of the pretense and snootiness plaguing our generation. If their newfound place in the indie scene taught them anything, it’s to claim your spot and call it yours. Nothing inspires like seeing people Drake themselves out of the bottom.

“Be an inspiration,” Tim advises their peers in music, before laughing. “What?”

Zild, like the wingman he is, cuts in to save. “Be a friend na lang.”

SHAREWith the barrage of gritty reboots plaguing 2020, one would be wise not...

Unfortunately, all we have is each other

SHAREPresident Duterte has finally signed the Safe Spaces Act or the Bawal Bastos...