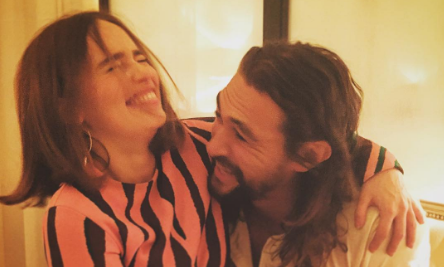 Since the first Game of Thrones season, it’s been duly established that one of the cast’s closest friendships belongs to that of Jason Momoa and Emilia Clarke’s. Having brought one of the show’s greatest romances to life (we know we all went down with that Khal Drogo x Daenerys Targaryen ship), the pair has constantly stated how strong their friendship is on interviews.

Although Jason has since left the series and pursued bigger projects like Justice League, it’s clear that he’s not over Game of Thrones and is still very much supportive of his former onscreen wifey.

This is where we get all spoiler-y, so leave now if you haven’t watched the newest episode.

On last night’s show, Emilia’s Daenerys practically fried the entire Lannister army using her favorite dragon, Drogon (named after Jason’s Khal Drogo of course!). And Jason just couldn’t keep in his pride and excitement for his former co-star. On an Instagram post he put up yesterday, Jason said, “@emilia_clarke miss u mama your a badass super proud.”

FUCK ME. It’s been so hard for me not to talk about the greatest show on earth. And I don’t want to spoil anything for anyone So I have been taking it easy on the posts. But holy shit that was intense. Wish I was there to fuck shit up So proud of Dan and David the cast and crew of GOT Aloha DROGO. DRAKARUS ?????? @emilia_clarke miss u mama your a badass super proud

Although a lot of people have been shipping Jon Snow and Dany together, that possible couple will never live up to Drogo x Dany. Sorry not sorry.

Wait….. did I NOT tell you guys?! Um yeah. Now if he’d only bend the bloody knee there’ll be no problems….. ??❄️? #modragonsmoproblems #igot99problemsandjonsnowisone #whichroundsmeupto100problems #youknownothingjonsnow

Goofballs @emilia_clarke my khalessi. What a women.

Well I guess the sun rises in the west and sets in the east then huh? Paris fashion week just kicked off….! ?? #Momoaloveforlifebaby #nomorebeerleftinparis #bestdresseddothraki

Missing these two! Hoping that the sun rises in the west and sets in the east real quick.

Want more Jason x Emilia? Check out our list of our favorite moments with them here.

SHAREJust like everyone else, the arcade will always be my go-to spot.  There...