One thing you’ll learn about one-year-old 100% Filipino streetwear brand Support Your Friends (SYF) by brothers Ralph Cruz (25) and Randall Cruz (21) is that it’s more than just a brand, it’s a movement. Their creations stand for something grander their locally-made high-quality threads and collab-friendly designs. SYF as the name goes, is a movement that asks you to “support your friends” and choose local. 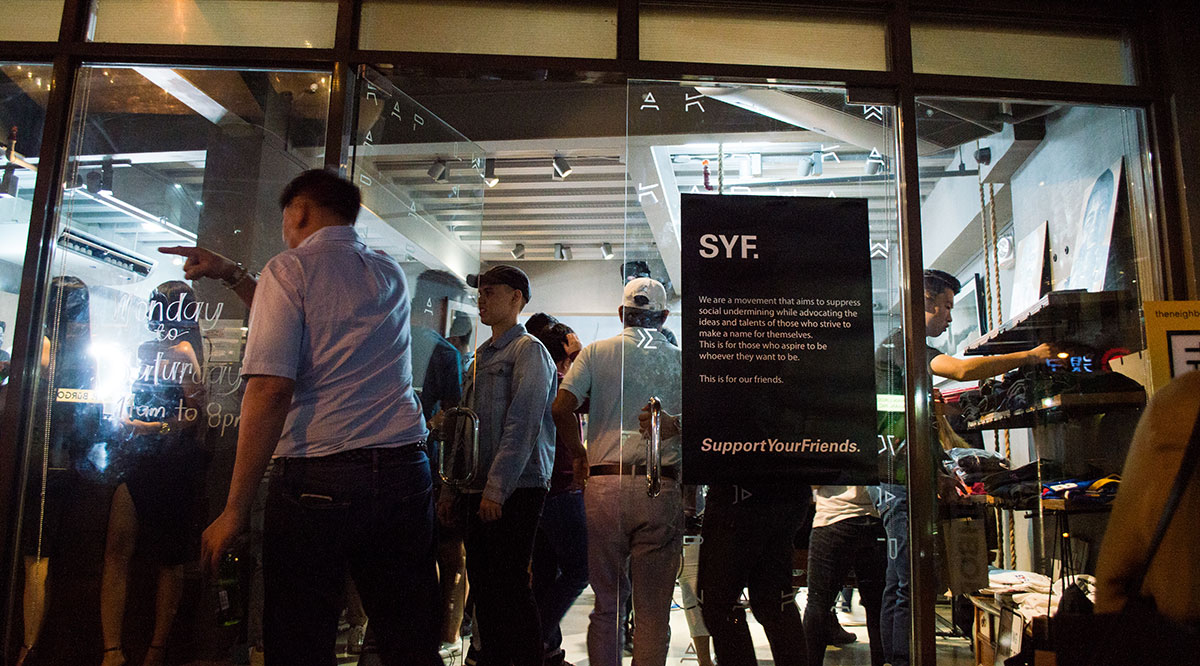 Last Dec. 1, they hit up all their friends, including us, to Come Together at Makati’s barber slash event space Kapwa Studio, to celebrate their first anniversary at their first-ever pop-up shop featuring all four of their collections, including their most recent one that is inspired by the idea of “mixing and matching.”And so, we supported our friends and stopped by, shopped, chowed down on some juicy burgers while appreciating art by Anna Bautista, and downed soju shots to music by Owle, Butta B, No One’s Home, Benz Lee, and Nomoclassiq. The night was a blast. 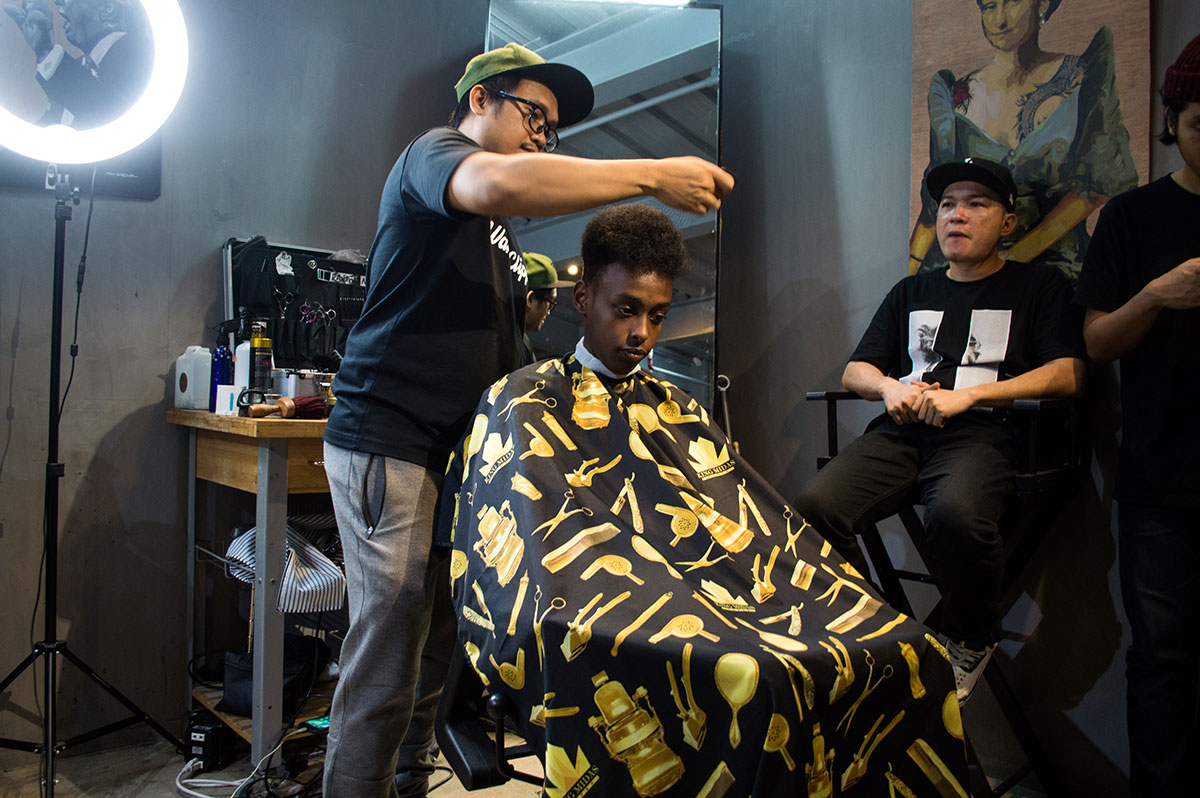 While we were at it, we even got to talk to Ralph and Randall about SYF .

Congrats on the pop-up and happy anniversary! Can you tell us how SYF started out?

Ralph: It was back in 2015 when we decided to make a brand.
Randall: We didn’t really know what we wanted to do with our lives then.
Ralph: But, we knew we wanted to do something great. It was an accident really. Everything is. We were just looking at our resources—what we have, and what we’re into. And we’re into fashion, looking good, and streetwear.
Randall: And feeling good.
Ralph: We grew up in a fashion family and we have our own manufacturing.
Randall: Not really fashion, but it’s more on sports wear garments, so we have a background in manufacturing, making patterns and all that, but we didn’t really care about it as kids, until that reality kicked in that we should do something.
Ralph: Basically, it was a two-year process. 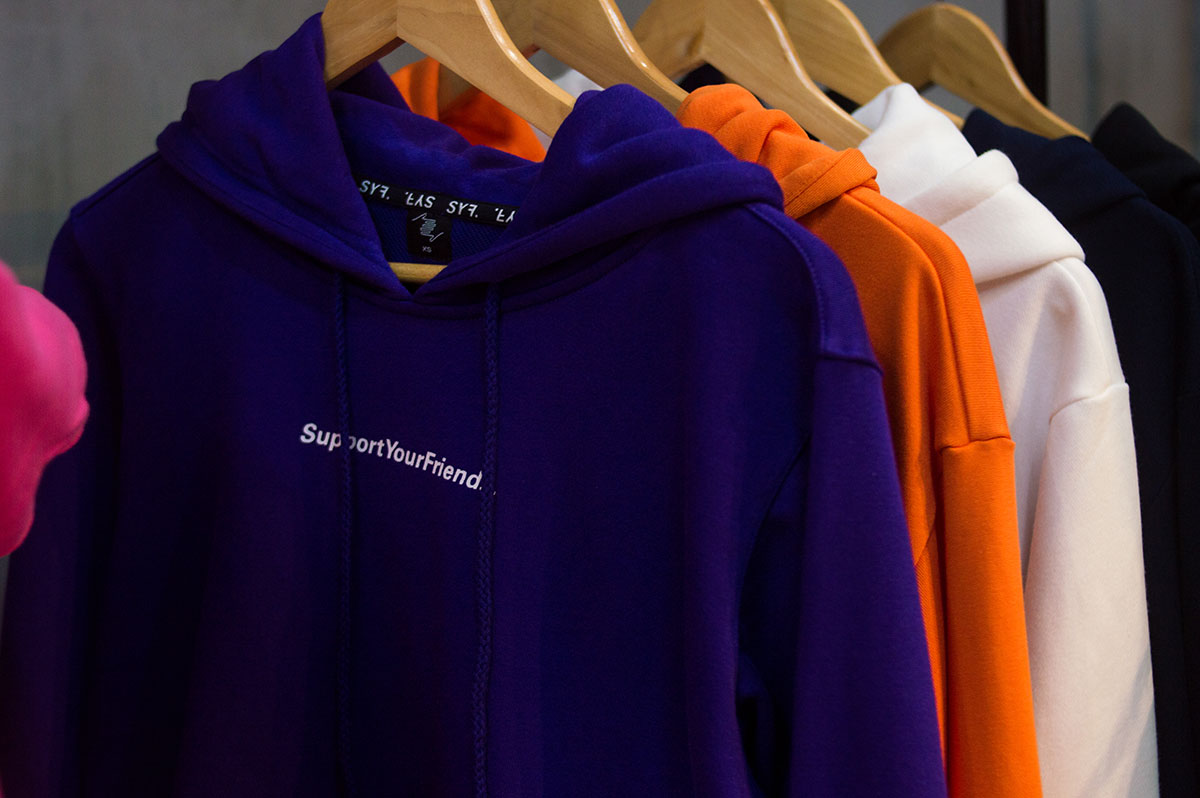 Was the brand called SYF back then?

Ralph: It was called “Punching Buttons” (from a Kendrick Lamar song) because…
Randall: Because we didn’t really know what we wanted to do, and we were just trying to punch the right buttons. But, we felt like it didn’t feel right. We had logo and everything, it didn’t feel right, so we shifted to “Takeover” because we carry a “take over the world” kind of attitude. We felt like we had the capability of doing something big.
Ralph: Yeah, we were set with “Takeover,” but then when we made a sample, a cap sample with “Support your friends” on it, and people started messaging us asking, “Where did you get this?” So that’s when we decided, “Why don’t we change the name to Support Your Friends?” 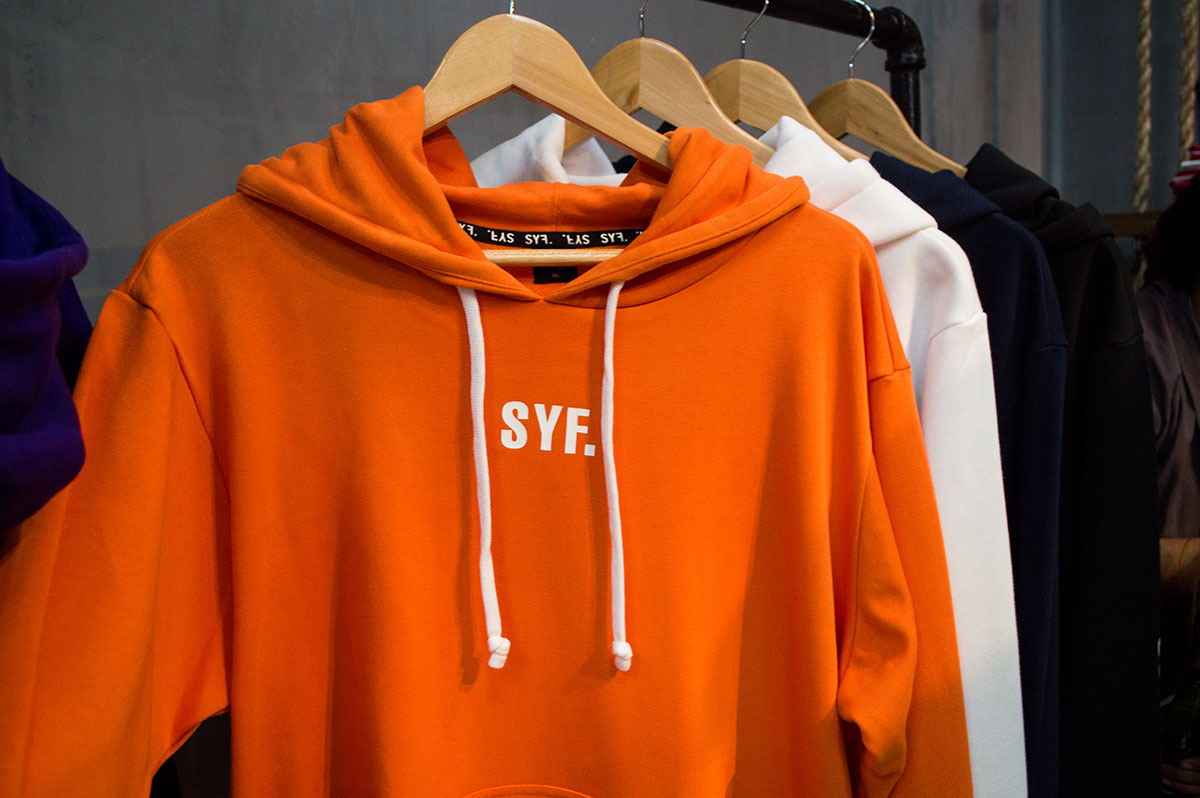 And that was it? You guys were set?

Randall: To be honest, we didn’t really want it to be “Support Your Friends” at first because it felt kinda soft. Normally in streetwear it’s about being “Supreme.” It’s all about toughness and having that attitude.
Ralph: We felt like “Support Your Friends” wasn’t tough enough, but we went with it. We like it.
Randall: Everything was an accident, basically—the name, the logo. All of it was an accident, but then we figured out how to connect everything. 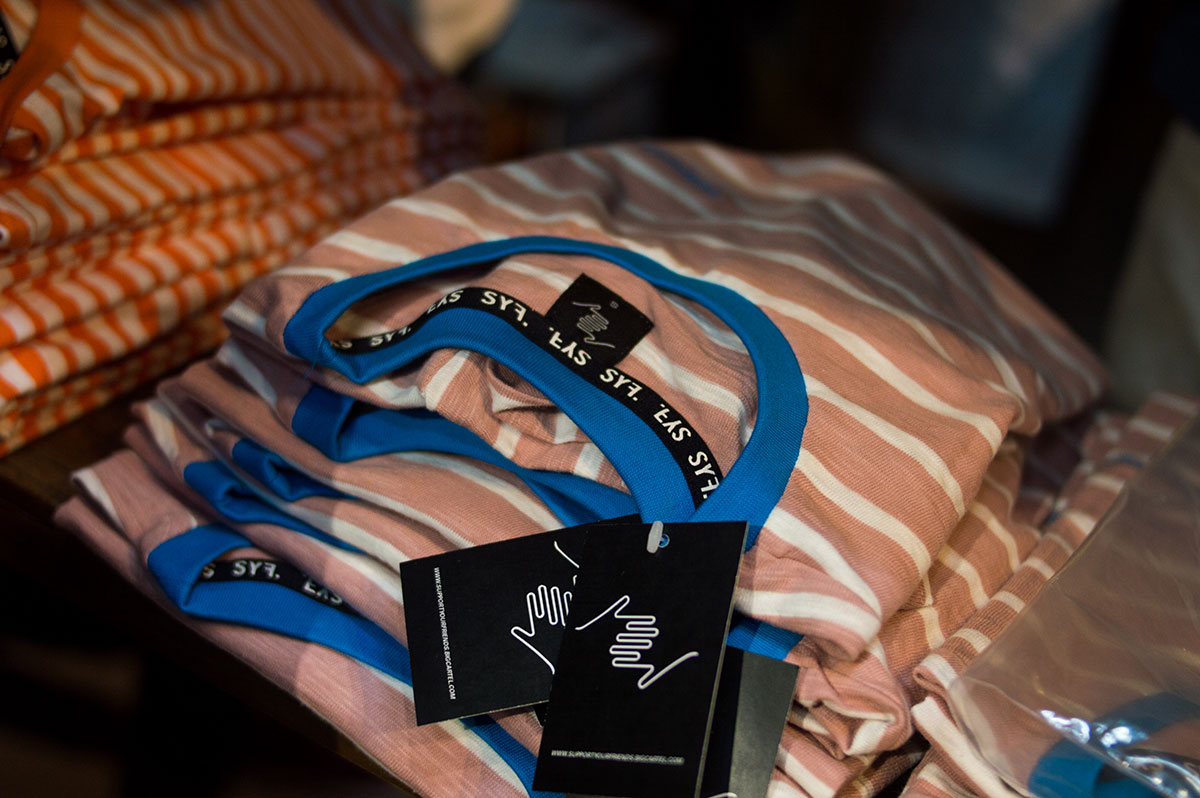 Ralph: Yup. It was also an accident. It’s a hand.
Randall: It’s a handshake. You know how every human being connects with other people through handshakes. That’s what it’s about. 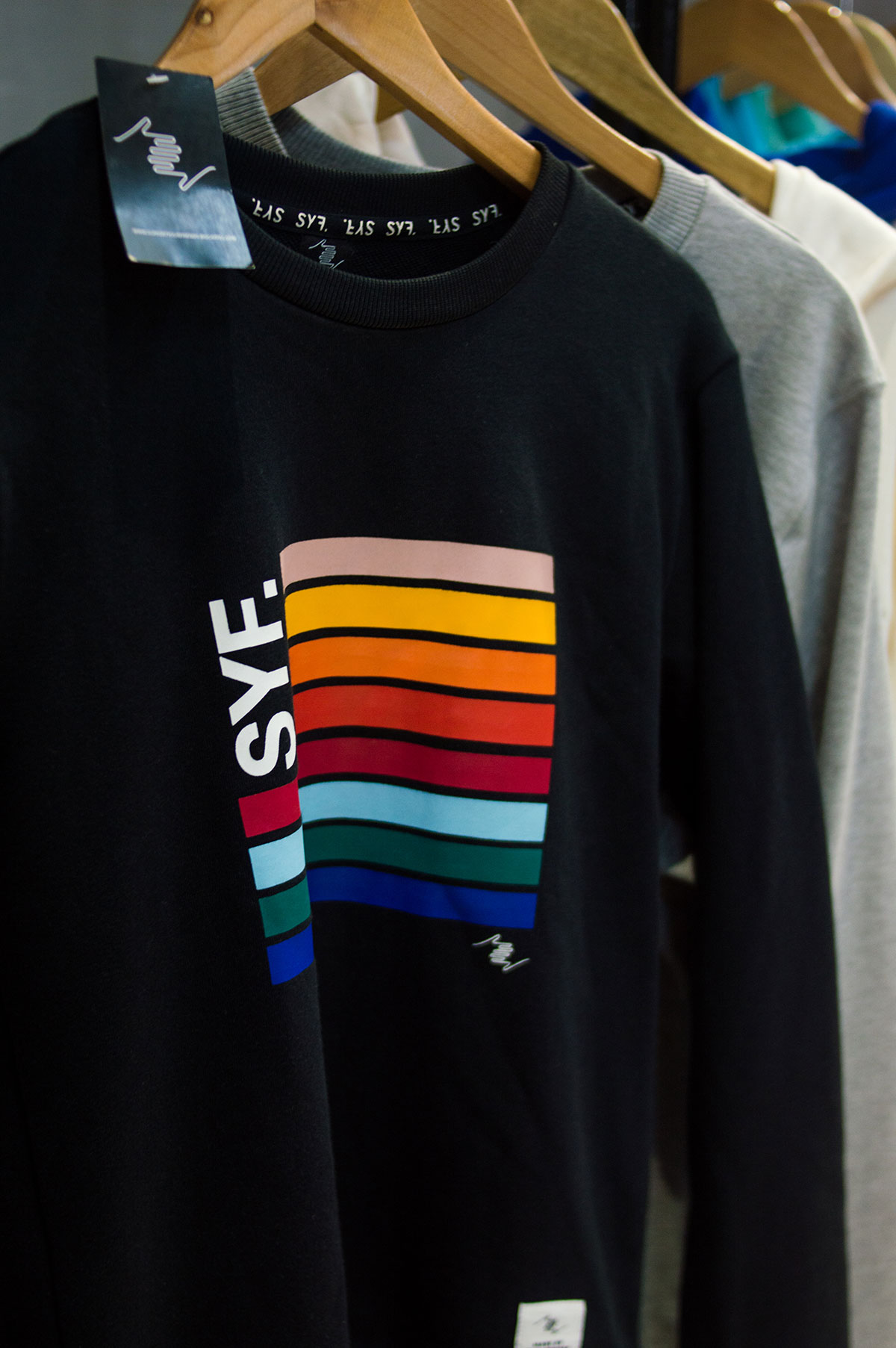 So, what is SYF all about?

Ralph: As we say, it’s a movement. Bottomline, we just want to connect with everyone who understand and appreciate what we stand for.
Randall: Like, we’re not obliging you to buy our clothes, but we’re saying, instead of buying something that is not locally made, by someone you don’t know, why not try to support someone who is right there beside you. Someone who is trying to make it work. 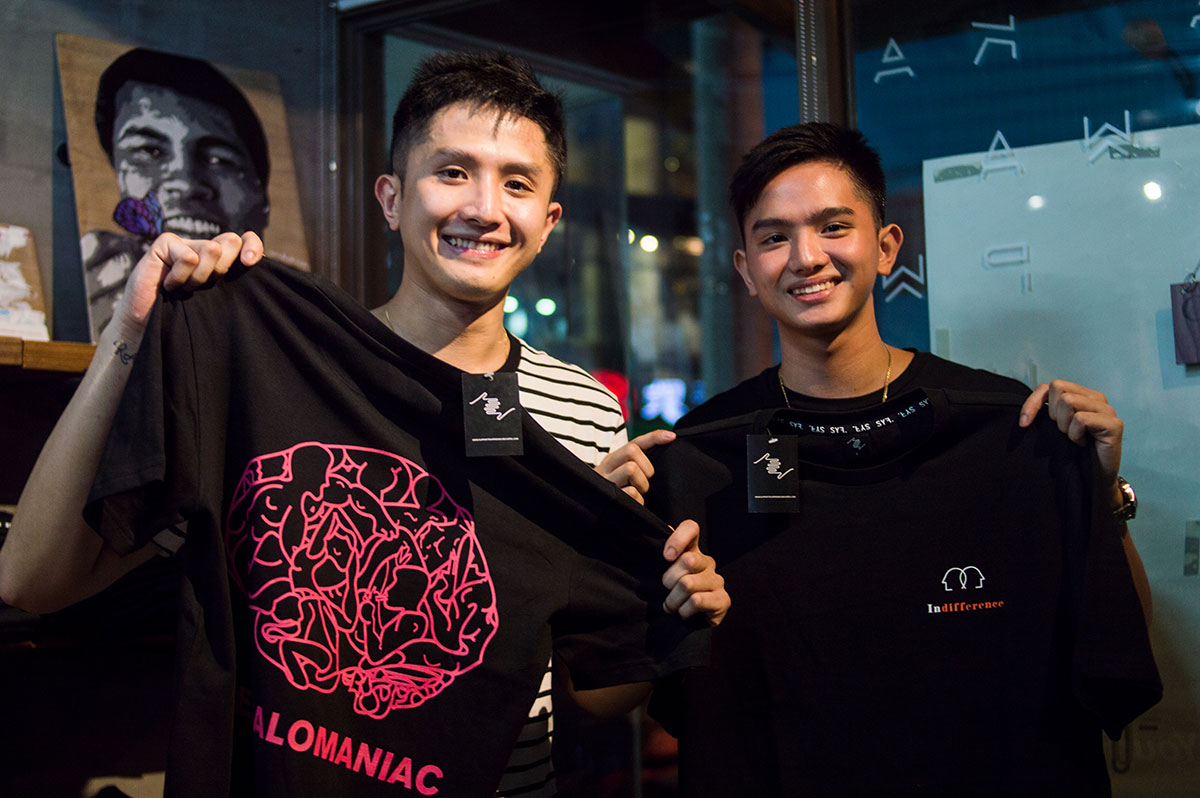 Out of all four collections, which piece would you say best encapsulates SYF?

Ralph: I’d say, my favorite shirt “Megalomania.” It’s a shirt inspired by a quote we read somewhere, saying that a person should always have a “megalomania mindset,” because everyone has something that the world needs. And I believe that it’s not really about being boastful or arrogant. It’s about having a mindset that says, you can do something that could impact the world.
Randall: For me, it’s the “Indifference” shirt. It’s also my favorite shirt. Indifference can mean a lot of thing, but to me it represents how nothing good gets away. Like, you don’t blend or mesh well together with something or someone, but at the back it’s like no matter how different you guys think about each other, if you’re good for each other, nothing good will get away.

SHARECollecting art is a thing of rich and, well, older people. As young...