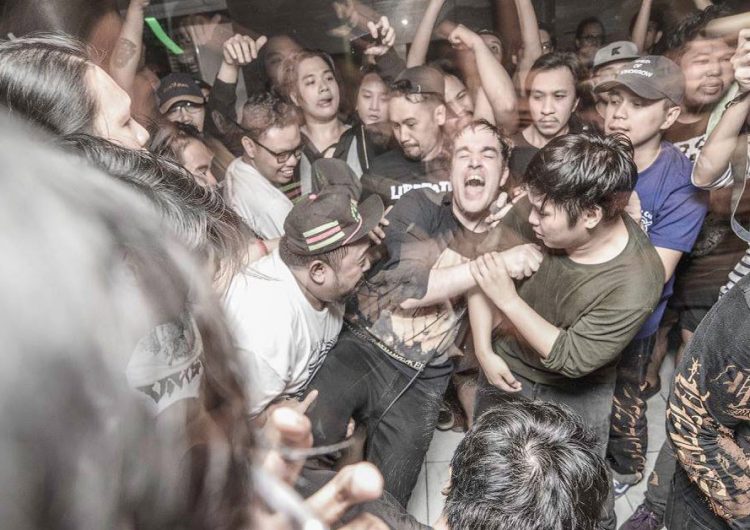 Rising from the neglected nooks and crannies of the world that welcomes spiked, rainbow-colored hair, ripped duds, rebellion, and D.I.Y. culture are around 30 emo, punk, and hardcore kids from all over the Philippines. Collectively known as the Sleeping Boy Collective (SBC), they were brought together in 2014 by the unexpected death of a close friend and fellow scenester, Raffy Mapa. SBC was born at the wake of Raffy under the realization “that it was a good a time as any to start putting up the shows [they] always wanted to be part of.”

Apart from being recognized as a gateway for both local and international hardcore bands to make it into the Philippine music scene, SBC gigs are known for being meticulously planned when it comes to ticketing and scheduling. Their crowd-controlled gigs don’t go by the standard Filipino time. They start and end as said. SBC strictly does not entertain media sponsorships as well.

“We’re used to a certain degree of self-sufficiency in terms of pooled resources—financial, labor, or otherwise. It’s nice to have shows that mostly break even or do well, but we continue to do this for the music, art, and the people we get to work with. We don’t have the bandwidth needed to let people in for free. When we go to other people’s shows, we pay just like everyone else. Being there is one thing, but paying for a show helps promoters and bands in more tangible ways,” they say. “We largely refuse sponsorships from large corporate entities. The extra money from a sponsorship might help, but if it means having to use art as a figurative billboard for other people’s business interests, we’d rather go out of pocket to preserve our integrity. It’s hard enough having to participate in an oppressive economic system, so having the space to create something on our own terms means a whole lot to us. The fact we can create things and express ourselves in positive ways is important and worth celebrating.”

When asked if they deem themselves exclusive, they protest. “If you’re asking us, we’ve always made an effort to make SBC shows as inclusive as possible. We try our best to listen to the people who go to our shows, and allow their experiences to shape the course of shows to come. We always believed punk was inherently open and positive, and while it takes effort, we’re doing what we can within reason to look after the crowd.“

All in all, they’re kids who just want to throw a fucking great gig.