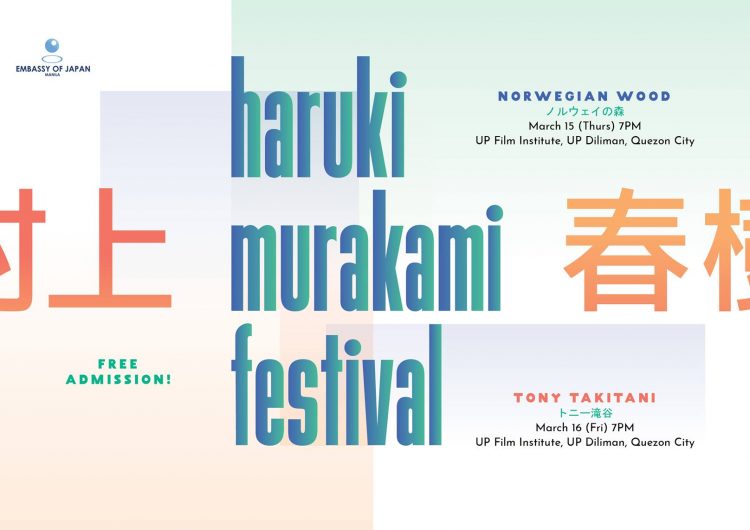 If you’ve ever found yourself immersed in the fictional fantasy worlds and cultural goldmines born from the mastermind of contemporary novelist Haruki Murakami, you’re in for a treat. Fans of the Japanese novelist—aptly called “Harukists” (yes, they’re a thing)—can now experience his literary oeuvre in the flesh. Brough to us by the Japan Foundation Manila, The Haruki Murakami Festival is happening this month until March. Spread across six days, the festival will be split into three segments: Talk, Watch, and Listen.

The first leg, Talk, is set to take place on February 27 at the Ateneo de Manila University, and March 17 and 18 at Fully Booked, Bonifacio Global City. Headed by literary experts such as ADMU English professor Alona Guevarra, Julz Riddle, Frank Cimatu, and more, Talk discusses everything Murakami—from his global appeal and popularity, to his themes, writing style, and passion for running that inspired “What I Talk About When I Talk About Running.”

Next, the Watch segment is dedicated to the Murakami film adaptions. Visitors get to enjoy screenings of Norwegian Wood and Tony Takitani—two of his most well-loved stories. Airing at the UP Film Institute at the University of the Philippines, Diliman on March 15 and 16, the award-winning films show for free on a first come, first served basis.

Lastly, the festival closes in the most Murakami way possible—with a jazz concert. While his novels may or may not have instilled in readers an unrealistic desire to fall in love with a stranger at a jazz bar and elope to the snowy slopes of Hokkaido, this may be the more practical option. The third event, Listen, features live performances of music woven into Murakami’s novels. On March 23 and 24 at the Bonifacio Global City Arts Center, the concert will merge spoken word with jazz piano by artists such as Hiroko Kokubo and Beatles-inspired ensemble 1966 Quartet.

SHAREFrom coming-of-age flicks to political tales, a dynamic range of cinema is at...