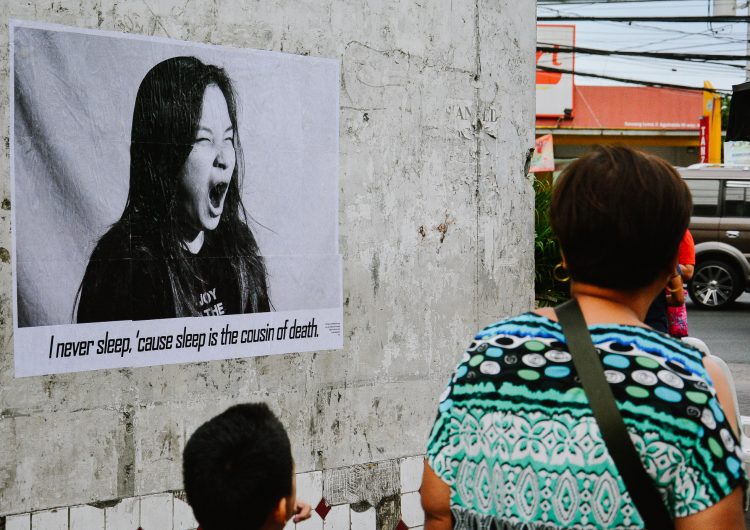 If you’ve been passing by Aguinaldo Highway in Cavite, for the past few weeks, there’s probably a chance you’ve seen what seems to be a portrait of someone yawning, with the caption “I never sleep, ’cause sleep is the cousin of death” below it. The photo appears to be pasted on the wall, and placed in prominent areas like on a wall under a busy overpass or on a highway telephone pole.

The faces of yawning coupled with the caption catch your attention, because well, other people yawning makes you yawn, but you can’t help but notice that the photo and the caption together make you wonder what it all means.

What makes this project interesting is that not only are there artists working on putting art on the streets outside Manila, but the starkness of the black and white canvas the poster is in makes it more visible (and cleaner, one would argue) against the busy streets of Cavite.

Photos of the different work surfaced a few days before the artist, Abes Abian, posted the full album on Facebook with a little introduction. SCOUT talked to Abes about the meaning behind his work:

You mentioned “your first personal project after a 9-month hiatus” in the description of the Facebook album featuring your work. Can you tell us more about yourself? What’s your day job?

My name is Abes, and I’m a freelance photographer based in Cavite. I’ve been doing personal projects for the past two years. Right after I graduated college last April 2016, I quickly jumped in to freelancing. I tried contributing photos to various publications and online media outlets, mostly photojournalistic works. Last May 2017, I did a portrait series, entitled The 2-in-1 Women, featuring single mothers from Cavite. It was a response to the disappointing statements of Sen. Tito Sotto, and I planned it in time for the celebration of Mother’s Day last year. Unfortunately, I didn’t get to finish that project. I lacked funding and resources, and that was the time that I realized that I have to find a regular job for now. It’s been nine months since I’ve been employed in a private telemarketing company, the job is not related to my degree and passion, but at least I have a stable source of income for now. I Never Sleep, ‘Cause Sleep Is The Cousin Of Death is my comeback project since being employed. Something to refresh my drive.

What made you decide to paste photos of people yawning along Aguinaldo Highway?

I’ve been documenting a group of street artists (WLRS Crew) in Cavite for quite some time now. I’ve been good friends with them. I was introduced to street art through them. Aside from murals, graffiti, and installations, they introduced another form of street art to me. The classic wheat pasting method. That’s where I thought I could incorporate photography to street art. Through this project, I hope to abolish the stereotype that if you’re a photographer, most likely all you do is shoot models, street, and events. It was very exciting, because we rarely see photo projects wheat pasted in public places locally. The unique delivery of street art inspired me to pursue this project. And the feeling of seeing your photos in public and the interaction it could make to the viewers is priceless.

“Through this project, I hope to abolish the stereotype that if you’re a photographer, most likely all you do is shoot models, street, and events.”

What do you want people to feel when they see your work, given that it is a study on the contagious effects on yawning and the posters are seen in public areas?

Actually the objective of the project is very simple. I just wanted to experiment if the people would yawn too if they would see yawning portraits in public. I didn’t want the public to feel sleepy or tired when they see my portraits, I just wanted them to yawn. Yawning for me is like a reminder to ourselves that we should take it easy sometimes. During a long and tiring day at work or in school, we all deserve even just a few seconds of the pleasures of yawning. It’s like a reminder that we are doing great and we deserve a break.

“Yawning for me is like a reminder to ourselves that we should take it easy sometimes.”

Tell us more about the art scene in Cavite.

The art scene in Cavite is very alive and strong. You could see art almost everywhere, and the locals of Cavite are slowly but surely accepting the concept of public art. Every month, we have different events and gatherings organized by various groups. And it’s lovely to see that during these events, we try to showcase a lot of talents. We can see all sorts of collaborations. Be it photographers, muralists, graffiti writers, bands, spoken word artists, solo performers, name it. We have it in Cavite. The art scene here in Cavite won’t pause soon, because of the efforts of the artists themselves.

We look forward to more of his and many others work posted in the many streets of not just Cavite, but in almost every nook and cranny in the busy streets in cities dotting the Philippines. Street art is also art.

SHAREIn a Fenty Beauty event this week, Rihanna unveiled that she’s not only...