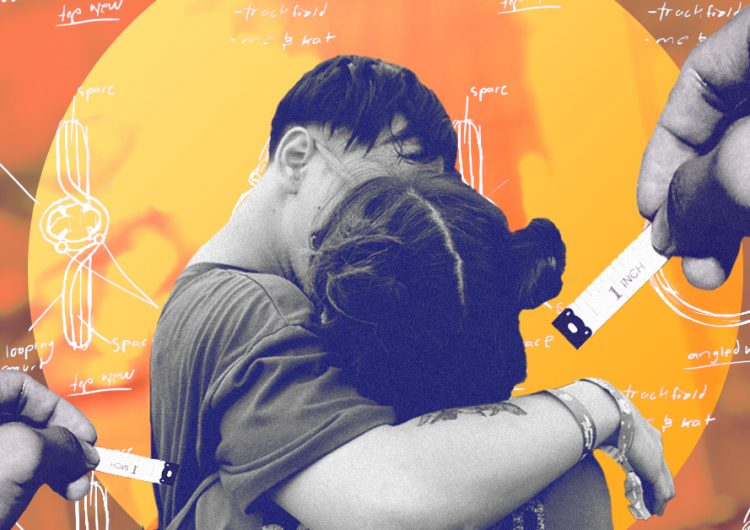 Public proposals are always a spectacle. The sight of seeing someone propose in a public space isn’t only a welcome interruption to our routine, but such a strong gesture of love and commitment in our presence makes us feel as if we’re not just bystanders, but active witnesses of a moment to remember.

But it makes you think about the logistics of things: was this spontaneous, or carefully planned? We know more about the public proposal that happened at Wanderland 2018 from the newly engaged couple themselves: Kat Crisostomo, 23, and Bryan Sochayseng, 22. Bryan shares the story behind the proposal several months in the making, while Kat shares her thoughts while onstage and the idea of being engaged at a relatively young age.

Bryan: It was actually like a whole bunch of everything just popped out. I don’t know if that makes sense but I really didn’t know where to start. But good that I was talking to the right people, my friends, Who helped me not only in taking in my excitement but helping me find the pieces I need for this.

Wanderland unveiled their lineup and I was like it would be the perfect venue because I wanted a lot of people to be there. I’ve also thought of wondering how to get up on stage but I know I might not be able to do that.  I was planning to just kneel in the middle if a crowd and in my mind have this like mosh pit space but instead of moshing it was us in the middle. Denise Fernandez (previously SCOUT‘s associate editor) told me she can talk to IV OF SPADES to get me up on stage with them to propose!

Bryan: I first hit up my friend Paulo Reyes about this and he got me in touch with his girlfriend, Nina Carlos, who was starting a jewelry business and boom, I’m her first customer. I designed the ring from scratch. The ring was made with the concept of how we first met. We met at a track field becuase of training at school. She was training and I was trying to catch up. I felt like my appendix was going to explode while trying to talk to her because I was crushing on her bad.

Kat: Of the four years that Bryan and I have been together, I’ve been asking for a ring for all four of them. I never wanted something big or extravagant and definitely not an engagement ring. I just liked the idea of him giving me something that I could wear proudly all the time.

That day, all I had in mind was that I was attending a concert where several songs meant something very deep for the both of us as a couple: “Mundo” by IV of Spades (it being my favorite song, hearing it the summer when we lived together) and most importantly, “Blessed” by Daniel Caesar (it really describes us, it makes Bryan cry).

Earlier in the day, it was difficult for us to get inside since there was a situation with our tickets. But that aside, we arrived in the middle of IV of Spades’ set just as “Where Have You Been, My Disco” was ending. I even said to Bryan earlier that day, “it’s okay! We don’t have to see IV of Spades.” After looking for our friends, Mundo started playing. I paused to pay attention as it was my favorite. Then, I heard Zild call Bryan up on stage.

I felt like I didn’t have time to think. I was shocked and confused in the best way possible. Then, I felt Bryan lightly pushing me to move forward. I immediately started crying. I’ve always asked for this and it was happening. When I typically thought to myself what I wanted as a marriage proposal, it would be something like how it went down in About Time but this was way bigger than that.

“I’ve always asked for this and it was happening. When I typically thought to myself what I wanted as a marriage proposal, it would be something like how it went down in About Time but this was way bigger than that.”

It was actually really confusing walking through the crowd. With no clue as to where exactly I should be heading, I moved my way forward making sure as to avoid stepping on laid out blankets and feet with tears rolling down my face. I heard so many gasps and “oh my god”s that I couldn’t count and it added so much to how I felt. Same. But I was smiling.

When we went up on stage, I could feel myself shaking. I just wanted to make sure Bryan was holding my hand. Being up there in front of everyone didn’t phase me, because I couldn’t organize my thoughts, let alone think. Trying to look back now, I still can’t think. Bryan made a short speech and I’m glad because you could tell we were both nervous.

“So how about it? Will you marry me?” It sounds silly but all I wanted to do was be buried in his arms. I didn’t care that there was other people. I wanted to let my feet drag and hang myself from his neck but I thought it would be disastrous if we ever fell. I was so emotionally exhausted. I just wanted to get down from the stage and talk to him about everything in a blanket cave at home.

When we finally did get down, we tried to go back to where we were with our friends. Waves of congratulations greeted us with smiles whenever we passed by. I felt so warm and full of love.

While “Mundo” played, Bryan had his arms wrapped around me while I cried. He told me about how he planned everything, what the ring meant (he designed it himself), and everyone who knew.

The ring was designed by Bryan after where we first met: the track of our school. We were tasked to run laps for our training and I was always ahead of him. He tried so hard to keep up with me that day. He even showed me a video of him measuring my finger while I was asleep.

“The ring was designed by Bryan after where we first met: the track of our school (we were tasked to run laps for our training and I was always ahead of him. He tried so hard to keep up with me that day).”

While Bryan told me about this whole plan, I couldn’t help but think of all the effort that he put up for this. Being where I am now, anticipating the planning of our wedding, I’m so overwhelmed just to start. And to think that Bryan planned this entire proposal has me beyond impressed and bursting with emotions. Now, I can’t help but cry whenever I hear “Mundo”. Even writing this has me crying.

And after four years of practically begging for something to put on my finger. Now, I have one… and so much more.

About being engaged at 23

Kat: It’s really weird because it hits me every so often how young I am. I’ve started looking at venues, dress shops, etc. and I see all the brides and they don’t look as young as me. Being realistic, it’s scary to marry so young but then again, it takes time to plan a wedding. I’m positive about Bryan though but when you think about that kind of “first step to the rest of your life” it’s really weird when you’re still unsure of what career you want to work towards, too.

I have so much faith in me and Bryan. It’s really cheesy but having him as my partner can help me get through anything.

For some of us who are around the same age as Kat and Bryan, the thought of marriage may be so far from what we’re currently facing and the idea of being married, let alone being engaged, may feel so alien to us. But Kat and Bryan, as well as many other second wave millennials, share a story that many of us shun but secretly aspire to have: young love blossoming into an awesome long-term relationship. The possibility of finding “the one” may be dead for some, but maybe it all boils down to the power of choosing and sticking with what or who you choose.

SHAREAsia Pop Comic Con is known to be chockful of surprises for everyone....

“The Kingmaker” spotlights Imelda Marcos, as she vies for her son’s election in...