Back in 2014, the Iglesia Ni Cristo held a charity walk that was set to raise funds for the victims of super typhoon Yolanda. The event was ground breaking as it set a record of 519,221 participants, making the charity walk recognized by The Guinness Book of World Records as the largest of its kind. For this year’s charity walk titled”Worldwide Walk to Fight Poverty,” the INC has beaten their previous record with an estimate of 1.5 million event participants. 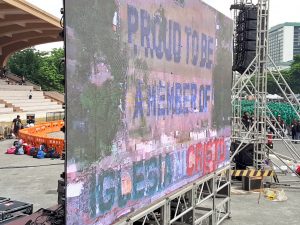 Dressed in white shirts, the members of the religious sect started marching as early as 6:00 AM to walk a 1.6 kilometer stretch from the Cultural Center of the Philippines up to their final stop in Rizal Park. The charity walk also broke the world record for the longest human sentence ever made with 23,235 Iglesia members gathering in Quirino Grandstand to form “PROUD TO BE A MEMBER OF IGLESIA NI CRISTO.”

It just irks us so much that all that effort loses validity in our eyes because of a simple mistake. The Guinness’ previous record holder back in India circa 2016 formed “You can you will”  during the country’s celebration of World Youth Day, and it was given a pass by Guiness probably because “You can” and “you will” can be broken into two independent clause. But INC’s attempt? That’s word spaghetti, amigo.

SHAREEvery idea starts with rough drafts. No matter how in love or on...