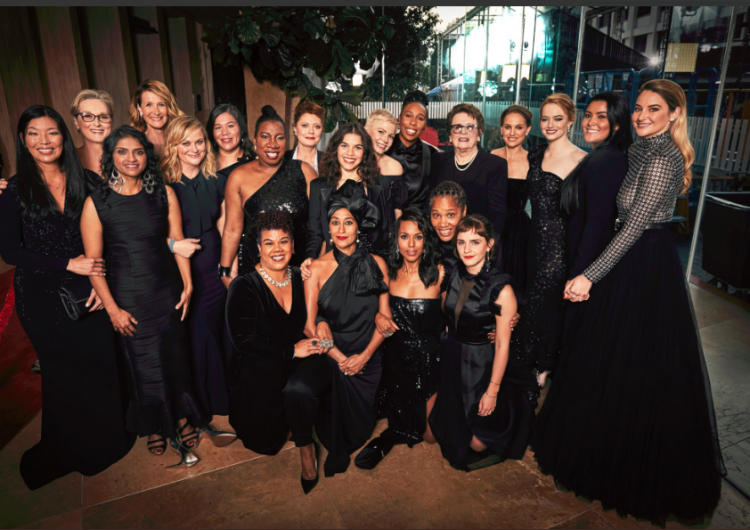 Four words, and yet Oprah Winfrey delivered it with such conviction as she accepted her 2018 Cecil B. de Mille award.

So, who’s time is exactly up?

Celebrities who attended this year’s Golden Globes made a unifying stand by wearing black as they show their support for the Times’s Up movement. It’s actually a worldwide support for women who have experienced sexual assault, harassment and inequality in the workplace; it’s only now, that everyone in the world was made known about it due to the collective action the artists did.

What a great way to use your fame, right?

Wearing black floor-length gowns and tuxedos aren’t really a new thing in the Hollywood scene for it has always been a trendy and classic color. Today, though, the color revolutionized and make it seem like a color that symbolizes strength, courage and voice to those were oppressed and yet unable or afraid to speak out.

Oprah, in her acceptance speech, cited different times wherein women were sexually assaulted and weren’t given equal treatment with men. It is for a known fact that we live in a time wherein women are finally standing up for their rights, for having to be treated equally in the society they live in.

Susan Sarandon, Kelly Clarkson, Millie Bobby Brown, Kate Hudson, Emma Stone, Reese Witherspoon, Eva Longoria, and Natalie Portman were just some of the women who decided to wear black to support the campaign for that night.

Zac Efron, Keith Urban, Justin Timberlake, Nick Jonas, Chris Hemsworth, Ryan Secreast were some of the men who wore black to show their support for the ladies, too.

Here we come!! And DAMN, my wife is hot! #TIMESUP #whywewearblack pic.twitter.com/q0XWH6XR68

Even these cuties from Stranger Things were in black, too!

The #StrangerThings kids took us to the Upside Down at the 2018 #GoldenGlobes: https://t.co/L6FfuZZUBQ pic.twitter.com/90EZbeTfMy

Let me offer you some tea so we could sit down and talk all about it.

Any awards night, especially in Hollywood, is an event in which everyone in the world is staying in tune for. Of course, everyone has their own reasons – it may be to see who’s wearing who, who’s bringing who as a date, or who will win the coveted award. But celebrities are stepping up each year as they add social relevance to their acceptance speeches. It’s not about “thank you for supporting me” anymore, it’s more of “thank you for this award and let me tell you about myself and what I stand for so we could act on it together” which is a pretty amazing thing, don’t you think?

With this, I’m sure women and everyone’s who’s in it for the cause are happy to see men wearing black. But aside from Seth Meyer’s, this year’s master of ceremonies, who said in one of his spiels, “Marijuana is finally allowed and sexual harassment finally isn’t”, there wasn’t much word heard from the men that night.

There’s more to showing support than just wearing it, maybe it would have helped if they spoke about it and actually made much more buzz and awareness. Walk the talk, talk the walk, maybe?

Overall, I think it’s a great time for women to be alive. Our country has been facing the same issues. If Hollywood made it happen, I’m sure that Filipinos can too.

SHAREThe government finally has a crisis hotline. In the process, they stopped supporting Hopeline...