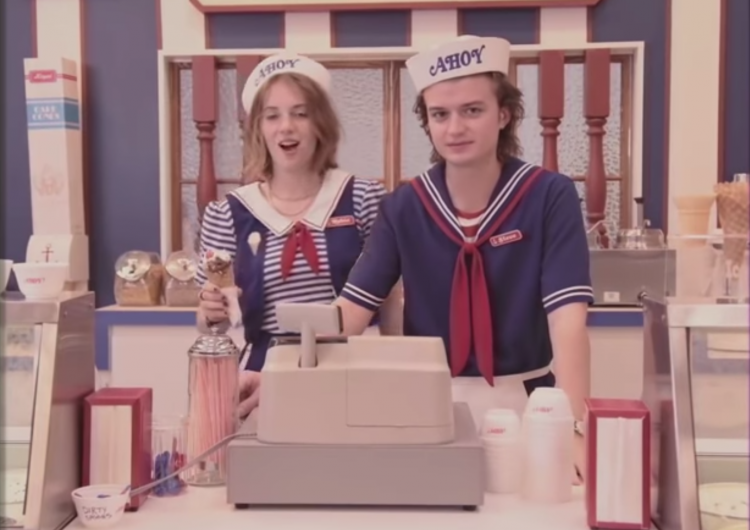 Our favorite ’80s-based Netflix show might’ve been feeding us hints. But the Internet rejoiced as a new “leak” of the trailer of Stranger Things’ third season dropped this week. Now revolving around Starcourt Mall, this new setting seems to hold something sinister. We’re not fooled by its cheery facade just yet.

As the show ventures to a new space, this season’s teaser veered away from its usual darker themes. With the video doubling as a cheesy ad for the mall, everything screams of the 80s nostalgia. The teaser has everything. It’s complete with the old-school video transitions and fonts, retro music, and hairspray galore. The 1980s aura was completely nailed in the head.

The star of the teaser was our favorite dad, Steve Harrington (Joe Keery) who awkwardly shouts “Ahoy!” behind the counter. He is joined by new additions to the cast like Robyn (Maya Hawke). These ice cream vendors in sailor uniforms gave us hints of what to expect in the upcoming season.

Stranger Things started filming around late April. The show promises that after that dark and heavy theme of the last season, we can expect a shift int one. This is to give character a “more interesting journey” according to the Duffer Brothers. In an interview with the Entertainment Weekly, the Duffer Brothers highlighted how the show grows up with its actors. “Even if we didn’t want to deal with [puberty], we have to deal with it because our real-life actors are going through it. I think that’s exciting because it forces the show to evolve and become something different every year,” they said.

With the introduction of brand new casts in a new setting, everything became uncertain of how this season will play with our minds (and feelings). But one thing’s for sure, the trailer’s glamour is the perfect ingredient for that subtle eerie atmosphere we just can’t shake off.

SHAREThe internet is a magical, wonderful place, especially when people put their heads...