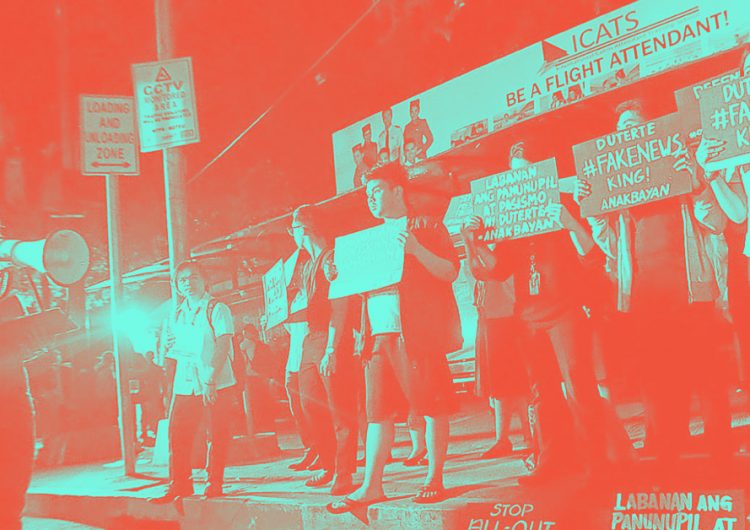 September 28 was a rather busy Friday afternoon for us. Dapitan was flooded with more cars than usual with the weekend rush hour, and the noise of blaring horns nearly drowned out our chants in our small protest outside the University of Santo Tomas (UST). The megaphone we had was malfunctioning, so we had to amp up our voices and rely on the strength of our placards and streamers to get our points across.

There were the same chants: “Duterte, Marcos, walang pinag-iba! Parehong tuta, diktador, pasista!” and even “Never again to martial law! Never again! Never again!” Just a week after the mass martial law commemoration mobilization in Luneta, we were back in the streets. After all, the fight is not yet over.

[The policemen]  took pictures, asking for our names and organizations, looking for our supposed “leaders.”

People usually tend to ignore us or give us the side-eye treatment when we’re holding a small protest, but that day was different. A few minutes in, more than ten policemen came to encircle our protest. They took pictures, asking for our names and organizations, looking for our supposed “leaders.”

I remembered policemen pulling the same stunt in an anti-EJK rally at Ateneo de Manila University (ADMU) last year, but the policemen in the University Belt were more aggressive. An officer went straight to us in the middle of a solidarity message and interrupted our protest with questions.

We’re doing nothing wrong for them to come near us in an abrasive manner. We were only carrying flags, cardboard signages, a streamer, and one malfunctioning megaphone.

He told us they are assigned to the University Belt, claiming they were only there to “protect” us and “maintain peace and order.” Policemen never approached us like this before. I even got into a brief argument with an officer. I told him we’re all legitimate students and we’re doing nothing wrong for them to come near us in an abrasive manner. We were only carrying flags, cardboard signages, a streamer, and one malfunctioning megaphone.

In the end, we agreed with their proposal to keep distance. But they never did. Policemen in motorcycles proceeded on following us as we marched outside UST. A week later, UST was included in the military’s list of schools allegedly part of the so-called “Red October” ouster plot. Schools indicated in the list were University of the Philippines (UP), Ateneo de Manila University (ADMU), the Polytechnic University of the Philippines, and other schools where student activists are emerging, or alive and thriving.

Student activism is definitely the latest target of “Red October” after the president and the military top brass tagged the Liberal Party, Magdalo, and other opposition groups as part of this alleged grand communist-led conspiracy to topple the government.

This list is yet to be verified by the AFP. And so far, it even includes one non-existent school called Caloocan City College. Try giving it a Google. You’ll only be greeted by vitural tumbleweeds. If releasing an unverified list to the public isn’t irresponsible enough, the AFP’s pronouncements regarding the “Red October” plot are becoming more and more erratic. To borrow the words of Vice President Leni Robredo, the plot accusations would have “laughable if they were not so dangerous.”

Our government seems to be making students and teachers pay by accusing them of taking part in “Red October” efforts. This will supposedly involve labor and transport strikes, massive protests, anti-martial law campaigns and martial law film screenings in schools.

These far from subtle attempts to silence and scare activists from critical thinking are done by tagging all forms of dissent as “terrorism” or “rebellion.”

AFP Assistant Deputy Chief for Operations Brig. Gen. Antonio Parlade Jr. said that films about human rights abuses under the late dictator Ferdinand Marcos were being shown “to incite students to rebel against the government, incite resurgence of the First Quarter Storm experience among students while projecting President Duterte as the new Marcos.” Artists and filmmakers took Parlade’s words as an attack on artistic freedom.

“This is red-baiting and slander of the worst kind. It impinges on our rights to freedom of expression, speech and assembly, and endangers us and our audience,” a group of filmmakers said in a unity statement read during a press conference at UP Diliman.

“We wonder why the AFP slanders us. Have they now become active defenders of the Marcoses and the criminals behind martial law? Or do they merely wish that the people remain ignorant of their central role as an institution in the wholesale trampling of our democratic rights—then and now.”

These far from subtle attempts to silence and scare activists from critical thinking are done by tagging all forms of dissent as “terrorism” or “rebellion.” The military is trying hard to distance comparisons between the late dictator Ferdinand Marcos and President Duterte. But let’s break out freshly minted “you tried” star stickers and pass it around to the AFP. It’s not working at all. The parallel between the two is impeccable. And if anything, this “Red October” plot crystallizes these comparisons.

The AFP is not only attacking schools, teachers, student activists, student organizations, and filmmakers by singling them out. They are putting civilians lives at risk.

Like Marcos before him, Duterte is now tagging all forms of dissent as “communist,” or at least in collusion with communist ideals. These far from subtle attempts to silence and scare activists from critical thinking are done by tagging all forms of dissent as “terrorism” or “rebellion.” The military’s pronouncements are eerily similar to Marcos’ anti-communist rhetoric that was used to tag anti-government protests in the early 70’s as a communist uprising to place the country under Martial Law.

In a time of rampant killings and human rights violations, the AFP’s pronouncements set a dangerous pretext to intensify the crackdown on activists and government critics through surveillance, harassment and red-tagging.

The AFP is not only attacking schools, teachers, student activists, student organizations, and filmmakers by singling them out. They are putting civilians lives at risk. This brewing paranoia aims to paint activists and critical thinking as a communist, terrorist, rebel, or subversive.

If history teaches us anything, however, it’s that our country’s history is built on revolutions led by rebels and subversives—from the Philippine Revolution led by the Katipunan to the People Power Revolution of 1986. Attempts to stifle dissent only breeds stronger resistance against oppression, tyranny, and dictatorship.

Student and youth groups from various schools and universities are slated to march again to Mendiola this Friday to remind us just that, not cowed by the government’s possible threats to tag the protest as a communist-led mobilization as part of the so-called “Red October” plot.

The youth must remain vigilant, of course, but we are not afraid. Young people call on everyone to be dauntless in standing up against all forms of oppression. Perhaps, it is the government that is and should be afraid of us.

SHAREGrowth is a constant theme in HannahKCA’s zines, ranging from “personal to something...

SHAREIt’s easy to feel frustrated in Manila.  The inglorious traffic, the suffocating pollution,...

SHAREThere are a number of notable songs from local artists about weed, like...