It’s been an exhausting yet fulfilling week for Arianators out there. After dropping “thank u, next,” arguably everyone’s self-love anthem right this moment, she topped this release with another surprise drop. And it’s coming from a Spotify account named Zandhr.

The speculation started on Twitter among Ariana Grande fans when a user posted screenshots of the album “Nobody Does It Better” on Spotify. After a Google search of “In Your Hands” at Apple Music, Twitter users were led to the supposed leaked album.

Another huge tell is Zandhr’s Spotify page. The artist’s playlist only contains one entry, which is the “Ariana Grande: Best Of.” Also, listening to “In Your Hands” for 30 seconds is enough of a giveaway that this is her. But let’s not throw skepticism out of the window too fast. 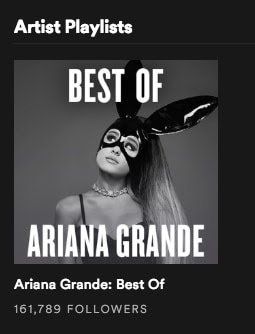 There are some parts of the album that doesn’t sound like Ariana at all. For example, the beginning of “Better Days,” is a bit far from the popstar’s signature voice. It doesn’t help at all that Ariana is yet to confirm if the release is from her or not.

Ariana or not, the songs are a total bop.  This is too confusing. So props to Ariana for bringing out the inner Sherlock Holmes out of everyone (if this is her) or Zandhr for the amazing release, we guess?

Listen to the album below.