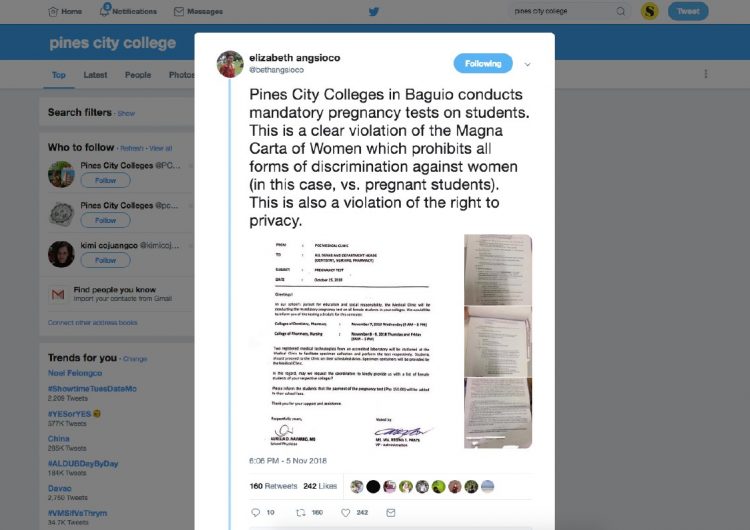 Women have every right to their bodies; everyone should know that by now. But Pines City Colleges didn’t get the memo. Rather, they gave one: The college based in Baguio City issued a mandatory pregnancy test on all their female students through a recent memo.

The memo was shared online through the National Chair of the Democratic Socialist Women of The Philippines, Elizabeth Angsioco’s, social media posts. According to the document shared, the college began their announcement last October 25, 2018.

It reads: “In our school’s pursuit for education and social responsibility, the Medical Clinic, will be conducting the mandatory pregnancy on all female college students.”

Pines City Colleges in Baguio conducts mandatory pregnancy tests on students. This is a clear violation of the Magna Carta of Women which prohibits all forms of discrimination against women (in this case, vs. pregnant students). This is also a violation of the right to privacy. pic.twitter.com/XvkJhFkNZ0

“In this regard, may we request the coordinators to kindly provide us with a list of female students of your respective colleges? Please inform the students that the payment of the pregnancy test (Php 150.00) will be added to their school fees.”

It gets more disturbing when their “pursuit of education and social responsibility” are just a flowery veil to force a pregnant student to drop out of her studies. According to the college’s Clinician’s Manual, a student who got pregnant before the semester started must report to the Dean and return the following year. Students who got pregnant in the middle of their semester will have to report her condition to the Dean and drop her subjects or file a leave of absence.

Matters are worse for pregnant students who went through a miscarriage. The student needs to prove that their child was not aborted. They are also required to undergo further testing by the school.

Is this the real life or is this the pilot episode of our country’s remake of The Handmaid’s Tale? Pines City Colleges are violating laws, and more importantly, the fundamental rights of their female students. The Republic Act 9710 Magna Carta of Women states that “rights of women under this Act [are] to be enjoyed without discrimination.”

These women have every right to continue their studies if they wish. So what if they’re pregnant? Pregnancy is not an obscene nor a taboo act that will harm the human race in its wake. Why stop them from continuing their education if they want to? They are more than capable and they have every right to make that decision without coercing them to undergo these test.

No student should be forced to give their consent on a procedure that violates their privacy and will relief them of their freedom of choice.

No student should be forced to give their consent on a procedure that violates their privacy and will relief them of their freedom of choice. Come on, it’s 2018. Most of the world’s leaders are Draconian misogynists. But out of all places, educational institutions shouldn’t be the ones propagating such actions and backward thinking toward their students.

We have reached out to the representatives of Pine City College and they have not yet issued a formal response as of press time.

SHAREThe government finally has a crisis hotline. In the process, they stopped supporting Hopeline...

SHAREICYMI, Twitter will do some spring cleaning this December by deleting inactive accounts....