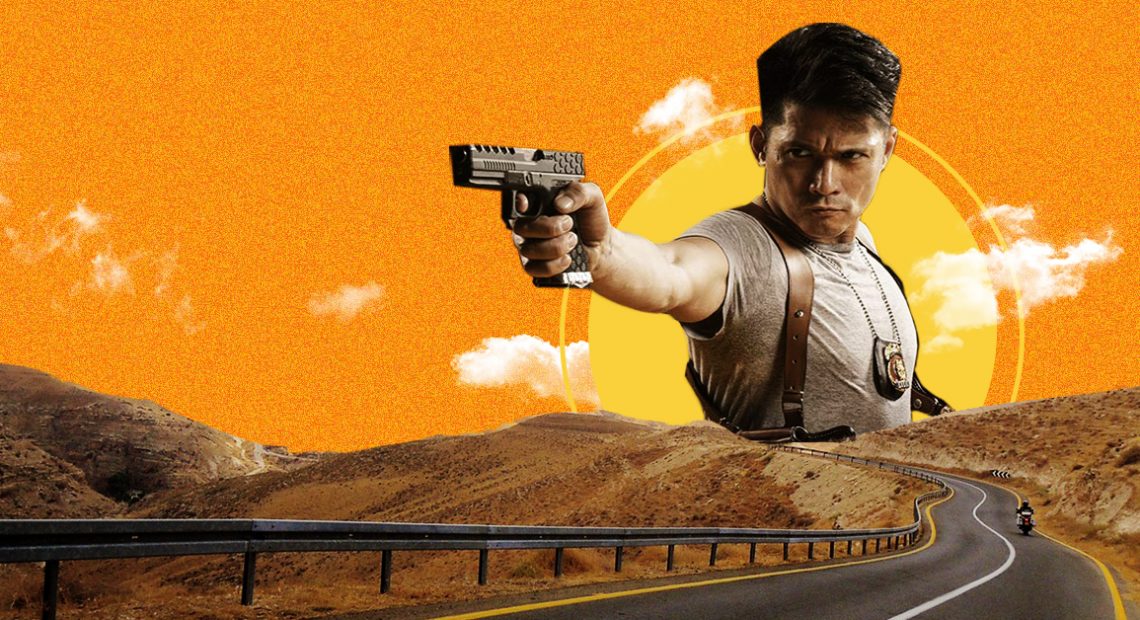 Robin Padilla makes a movie about a senatorial candidate and then wonders why people are politicizing it. Amazing.

For starters, with dela Rosa’s senatorial bid for the upcoming elections, people have viewed the movie as a vehicle of a premature campaign. Although this movie, paid ads on primetime TV, and a billboard along EDSA may suggest campaigning, the Commission on Election (Comelec) spokesperson James Jimenez said the release of the biopic doesn’t violate any rules under the Fair Election law just yet.

The movie came out yesterday, 13 days shy of the official campaign period. “Bottomline, the showing of any cinematographic work featuring the candidates from the start of the campaign period moving forward is considered a violation of election laws,” Jimenez told GMA News. Okay. 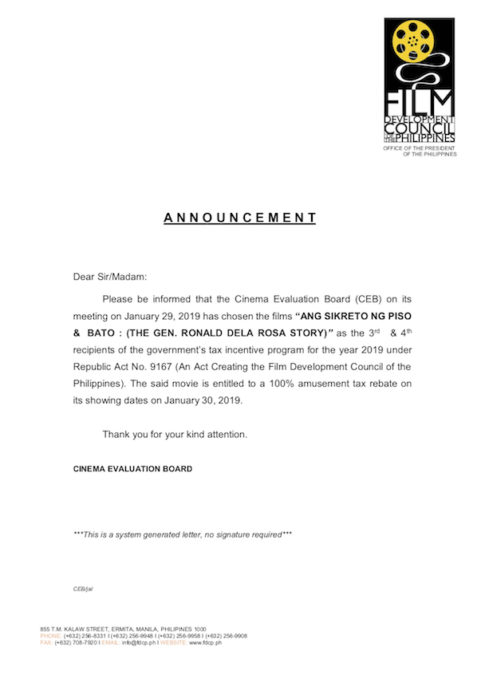 In the last two days, a copy of a document from the Cinema Evaluation Board (CEB) circulated online. The document announces the movie as the recipient of a 100 percent amusement tax rebate along with Ang Sikreto ng Piso. The biopic has been rated “B” by the CEB. Following the provision from Republic Act No. 9167, Section 13, the movie should only receive 65 percent tax rebate. However, in a report from PEP, the CEB admitted that what circulated online was an honest mistake. Was it?

“To begin with the FDCP-CEB should not even have considered this as a film worth rating. After all, it is not a film as much as it is using the medium of film to campaign for a candidate,” writer Katrina Santiago wrote on her website.

So people can call for the boycott of the movie, critics can call BATO The Movie basura, and Robin Padilla can defend his movie all he wants.

However, this isn’t just about how politically charged the movie is; it’s also about how the CEB rating system works.

The Film Development Council of the Philippines (FDCP), to which the CEB is affiliated, was formed under RA No. 9167. Their role, according to the law, is “to upgrade the art and craft of film making and encourage the production of films for commercial purposes, intended for public entertainment, that seek to enhance the quality of life.”

With that goal, the CEB incentivizes films that would get a rating of either A or B. Those with an A rating would receive 100 percent amusement tax rebate, while those with a B rating would get 65 percent tax rebate. This gives film producers additional resources to create more quality films.

Under Section 11 of the law, films under review are judged primarily based on the artistic and technical aspects of the film: direction, screenplay, cinematography, production design, editing, sound design, musical scoring, and of course, acting performances.

Well, if that is the case, why did the Bato biopic got a B rating while Khavn De La Cruz’s Gawad Urian Best Film awardee Balanginga: Howling Wilderness and Dwein Baltazar’s critically acclaimed Gusto Kita With All My Hypothalamus weren’t given a rating last year?

While reports indicate that the films have been given a zero rating, Film Development Council of the Philippines Chair Liza Diño clarified that such rating doesn’t exist. “It’s not graded, meaning there is a pre-qualification measure,” Diño told GMA News, further explaining that the evaluation is “a privilege, not a right of every filmmaker.”

The rating was particularly important for an independent film like Balangiga. The film was made outside the capacities of a big studio or film outfit, and the tax rebate would mean a lot for the team behind the film. “The CEB, in theory, it exists to encourage the production of alternative quality cinema. This is outside the studio system. Supposedly, they encourage producers to take more risks on these kinds of stories,” Balangiga producer Achinette Villamor said in a press conference last year.

I’m not going to tell you to boycott Bato. I am going to tell you, though, with what little authority working as a professional film critic for decade might give me, that it’s a shit movie.

The two films weren’t evaluated at the same time. However, with such a move like this, the question about the artistic judgement of the board remains: Why would, as film critic Phil Dy called it on Twitter, “a shit movie” get a high rating while a celebrated film like Balangiga didn’t?

After years of hypothesizing about its follow-up, Luca Guadagnino gives us a hint...