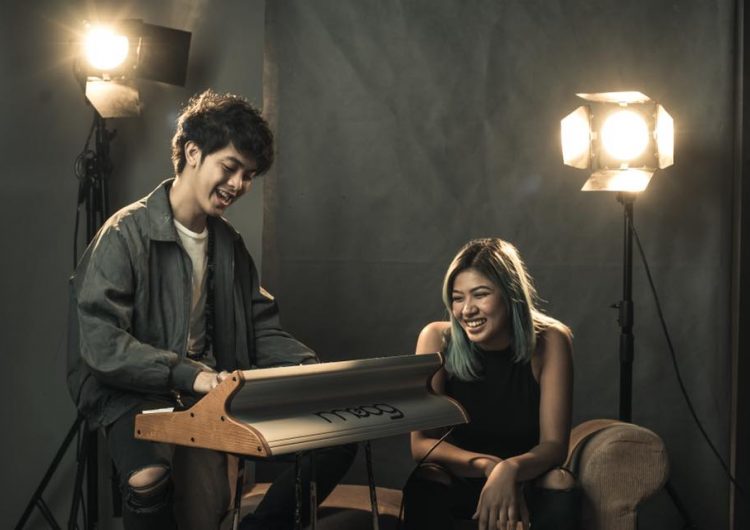 Intertwined is a colorful band. This doesn’t end with their dominantly jazz, multi-layered, treading along disco pop soundscape. Hailing from Cebu, Intertwined’s collective is as big as their passion to bring their name up from the screens to the stages. If you’ve seen them perform live, you’ll know how they can easily sneak into your senses to steal you away for a while. Their presence screams just as loud as it can get, but never the eerie way. This level of expertise for such a young outfit might have been their winning charm in the latest Wanderland’s San Miguel Wanderbattle.

Hitting high notes and suave melodies through their cover of Aretha Franklin’s “Rock Steady” and their original tracks “Be Mine” and “Feels Good,” Intertwined defeated fellow underrated acts in the recent Wanderbattle. Now that we’re a ticket away to seeing them perform in this year’s Wanderland, we talked to Mandy on Intertwined’s story and sound.

When and how did the band start?
Intertwined started as a duo between Henrick and I. We released our first single, “Love Of My Life,” which can be found on Youtube and Facebook. It is also currently being played by the radio stations in Cebu. As we began to write and produce more songs, we decided to include more members to achieve the sound we were looking for. Eventually, we became a band of 16 members all in all.

Why “Intertwined?”
The word “Intertwined” perfectly describes the work ethic of our band. How we write, how we make all of our ideas work together, and how we treat each other as a family. Henrick and I originally chose the name Intertwined because it also describes our relationship.

How would you describe your sound?

We describe our genre as Gospel Funk. But as a band, we also like to explore different genres.

We describe our genre as Gospel Funk. But as a band, we also like to explore different genres. This is especially because we all come from different backgrounds. For example, some of our members were raised and attained their musical skills from church.

Also read: Wanderland 2019 is going to be a two-day festival

How does your creative process go? How does the collaboration work?
Henrick produces our tracks and I write the lyrics. When it’s time to record, that’s when everyone’s ideas come out. When we practice, that’s when we combine ideas to make each performance a little different.

For you, what is the current state of the music scene in the Philippines?

What I wish is that more people are aware of the many talents we have here.

Here in Cebu, our music scene is really broad and adventurous. What I wish is that more people are aware of the many talents we have here. I think the San Miguel Wanderbattle really gave us Cebuanos the chance to show off what we have. It’s really an honor for us to have won so we can represent Cebuano artists and get more people to hear what we have to offer.

How would you like your music to be described by people?
As a songwriter, I love making people feel. Whether happy, sad, longing, or proud, I want people to acknowledge their feelings when they hear our music. For example, if people hear our song “Feels Good,” I want them to get up and dance and put their problems behind them.

As a songwriter, I love making people feel. Whether happy, sad, longing, or proud, I want people to acknowledge their feelings when they hear our music.

What’s your favorite Intertwined song so far?
Personally, my favorite Intertwined song is “Be Mine.” I wrote this song before Intertwined was even formed. It was one of my first songs that I was brave enough to let anybody hear. At this time, I just played the song on the ukulele because that’s how I wrote it. Years later, when I let Henrick hear it, he took the song into his own hands and transformed it into something way different. And then the horns came in and then strings were added and when I heard the final output, I was so overwhelmed. Something that was so precious to me and kept away from the world was now this masterpiece that I still cry to every now and then (laughs).

SHAREWe all have our own different reasons on why we are on the...