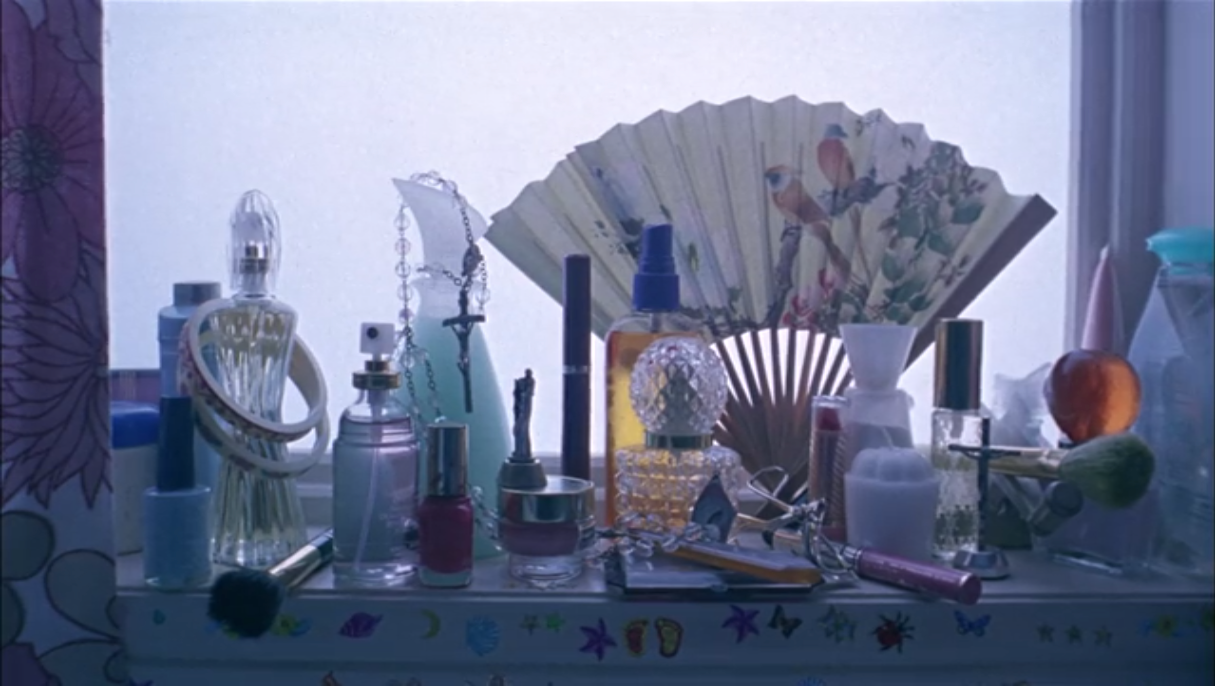 I had a bit of a Virgin Suicides phase in my late teens. Both Jeffrey Eugenides’ book and Sofia Coppola’s movie adaptation lingered in my head, prompting me to reread and rewatch them. The story’s told by the neighborhood boys of Grosse Pointe, who attempt to understand the sheltered, tragic lives of the Lisbon sisters from the outside.

Identification was easy with my context: Growing up in a highly conservative household, even the architecture and make of our cars bespoke an obstinate adherence to older ideals. And like the girls, I also had a pervasive appetite for self-destruction.

I made playlists complete with album art and bought lacey white clothes. I made my room look the part, with my grandmother’s empty perfume bottles and statues of the Virgin Mary. I would smoke “in secret”—which actually wasn’t a secret at all, as its noxious air tended to waft to the other rooms. Every now and then, I would cut my wrists. I thought of doing worse, but couldn’t quite reconcile my thoughts with my religious beliefs.

My current, critical distance tells me I was projecting my feelings onto them. I believed that I knew exactly how they felt, but missed the point that the story is told through an outside perspective. Nobody can really say what they were thinking, because they were gone. Pan out a bit more, and you realize that this is a work of fiction, masterfully embellished by Eugenides.

This unhealthy fixation on the girls’ suicides was later explained by a diagnosis of both depression and anxiety. The work of fiction legitimized my desires to hurt myself. I saw the same thing happen with people from my high school, albeit in accordance with what they perceived the emo aesthetic to be: fallouts with an M.U. prompted tearjerker playlists on MP3 players (with MCR, FOB, P!ATD and other pop-punk acronyms), Sharpied-on song lyrics on Chuck Taylors, an ex’s initials engraved on forearm skin. Self-harm had been lumped into “normal,” “attention-seeking” behavior.

Pop culture haphazardly paints this inaccurate picture for us. There are so many books, movies and shows that portray a glamorized (or conversely, understated) view of mental illness. It is in no way an insult to the quality of the work, but uncritical consumption of these forms of media can be harmful to impressionable audiences, like me back then.

The stigma is further perpetuated, telling those who are actually mentally ill that what they’re feeling or doing is quirky, mysterious and even attractive. On the flipside, it prevents others from finding relief, because they’re just attention-seeking teenagers and they should be ashamed of themselves.

The red flags become buried in a veneer of charm, edginess and desirability. Quirky characters meet in a psychiatric ward and fall in love. Suicide, self-harm and substance abuse are seen as literary devices to further the plot and chase the American Dream in a drugged up daze.

Actual depression is not part of the creative process; it doesn’t give you the time of day to sketch or write. It saps your energy and productivity, convincing you that you are the scum of the earth for not starting on your to-do list. It isn’t a magical repository of “tortured artist” creativity, and it will not suddenly land you a happy relationship—in fact, you will probably drive people away.

The media has both hits and misses in terms of its portrayals of mental illness. Some media forms can be accurate, but only to an extent. But too often are the mentally ill portrayed as violent antagonists (American Psycho, Hannibal) or quirky selective mutes (The Big Bang Theory); therapists as unethical and incompetent (Analyze This, Shutter Island, A Clockwork Orange); mental illnesses as cool (Fight Club, Sucker Punch), as well as beneficial to the afflicted (Sherlock, Monk). But that’s okay, you can cure mental illness with this One Weird Tip: meeting the love of your life (Silver Linings Playbook, It’s Kind of a Funny Story, The Art of Getting By).

Caution in portraying mental illness shouldn’t be just limited to pop culture. Certain online communities can perpetuate skewed views, convincing people that it’s part of their individuality, preventing them from wanting to seek help. Even news reports on suicides need to be done with careful wording and no hint of glorifying the act.

There’s no accurate measure of what gets it 100%, since it’s different for everyone. This is me filling the gaps with personal experience. Actual depression is not part of the creative process; it doesn’t give you the time of day to sketch or write. It saps your energy and productivity, convincing you that you are the scum of the earth for not starting on your to-do list. It isn’t a magical repository of “tortured artist” creativity, and it will not suddenly land you a happy relationship—in fact, you will probably drive people away. Anxiety is chest pains, not being able to breathe, calling your boyfriend 72 times and ruining people’s days by mere association. Dealing with both feels like a tug-of-war between not doing anything and having to do everything.

I will always be an admirer of Eugenides’ books and Coppola’s films, but I’ve dialed it down to just that. This is real life, where there are no retakes and revisions, no dramatic fade-outs to the somber score of Air.

Characters in literature and film might be defined by their mental illnesses and maladaptive ways of coping, but I’m not a character in someone’s screenplay—I’m a real person. I’m glad for the day I came to my senses and realized that that wasn’t real life. That was slapping sign on living hell and calling it “heaven.”

Many thanks are in order for the mental health professionals and supportive people around me. I planned to do something very irresponsible to myself on my 20th birthday, partly as homage to my favorite book at the time. Good news: I’m 22, I’m still here, and I plan to stay.

SHAREIN PARTNERSHIP WITH RESORTS WORLD SENTOSA AND KLOOK The Philippine Atmospheric, Geophysical and...