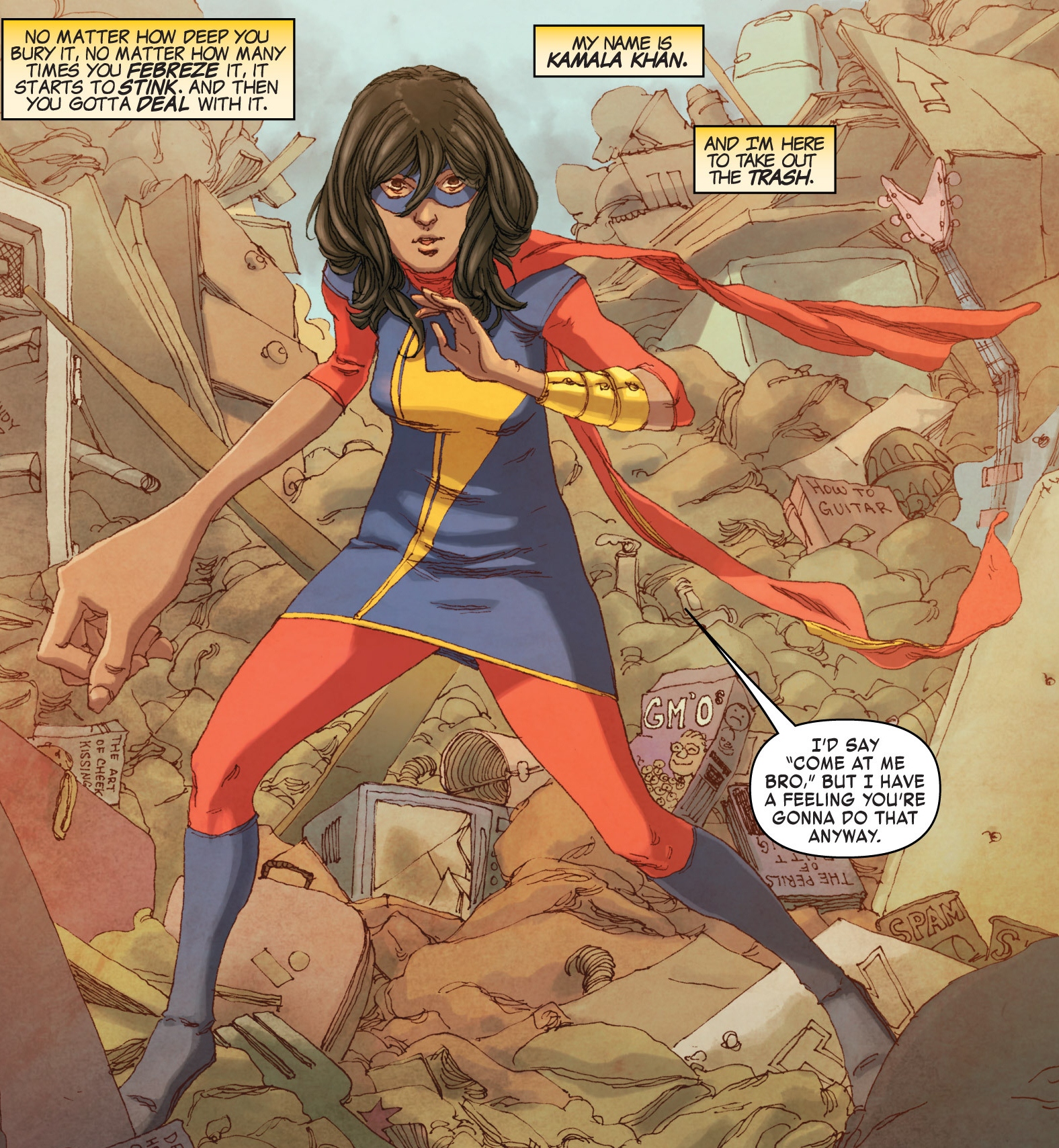 You’ve probably heard about this by now, but just to recap, Tony Stark is stepping out of the Iron Man suit and new original character Riri Williams is taking over. Well, in the comics, anyway. Riri is a tech-savvy genius who enrolls in MIT at the age of 15, and reverse-engineers her own Iron Man suit in her dorm, catching Tony’s attention.

“This story of this brilliant, young woman whose life was marred by tragedy that could have easily ended her life—just random street violence—and went off to college was very inspiring to me,” shared Marvel writer Brian Michael Bendis in an interview with TIME. “I thought that was the most modern version of a superhero or a superheroine story that I had ever heard.”

You see, Riri’s inclusion in the Marvel Universe and her role as the next driver of the Iron Man suit is  groundbreaking. A lot of online news sites, cultural and lifestyle magazines have already given their insights about Marvel’s obvious “obsession with white guys” and palpable fear for a minority superhero. If we’re to review Marvel’s recent and future releases for Phase 3, we had Captain America: Civil War (which earned an easy $1 billion), and we’ll have Doctor Strange, Guardians of the Galaxy Vol. 2, Spider-Man: Homecoming, Thor: Ragnarok, Ant-Man and the Wasp, and Avengers: Infinity War Parts I & II, all donning white, heterosexual, privileged-at-birth, male main protagonists (with the exception of Black Widow, the Wasp and other female leads). The only films we could probably hope for a female or a person belonging to the minority for a protagonist is Black Panther and Captain Marvel.

That small percentage is not very reassuring.

A recent study of diversity in Hollywood concluded that the films and televisions produced by major media companies are “whitewashed” and that an “epidemic of invisibility” cloaks the industry for women, minorities, and LGBT people.

In the early eras of our beloved characters, comic book audiences were shown mostly white, male specimens that consequently established how heroes should look like. Before all the reboots and the rebirths, iconic heroes like Spiderman, Captain America, Iron Man, Superman and Batman all shared something in common—they were all undisputedly white. At the time, it wasn’t such a big deal for people to protest on having more diversity in race, culture, and gender.

Fortunately, the appearance of Riri Williams was preceded by a number of major character reformations, supporting Marvel’s new initiative in piecing together a more diverse powerhouse ensemble of heroes. Sam Wilson, a.k.a. the Falcon took up the mantle of Captain America, Thor is now a woman, one Spider-Man was a black/Hispanic teen, and the new Ms. Marvel is a Pakistani-American teen, the comic’s first ever Muslim superhero lead. As a testament to the growing appreciation for diversity (and to the existing power of representation) Kamala Khan’s Ms. Marvel, now on its sixth printing, sold around 20,000 copies against an average statistic of 3,000 copies per printing.

On to Marvel’s strongest rival, DC Comics debuted a new Superman in the form of Kenan Kong, from Shanghai, China. The fact that he’s Asian and modeled as the world’s strongest hero is enough to excite the web. Writer Gene Luen Yang told the Huffington Post that “the broader goal is to show that a character of any color, a hero of any kind of background can be compelling—can be somebody that anybody can identify with.”

Back to Bendis’ vision for Riri’s inclusion: “We want to remind people that anyone can pick up that mantle. Captain America is not a race. Captain Marvel is not a gender. We want to make sure that it’s about the idea and what they represent.”

If we’re to advance our taste in superhero films, then we need fresh and more complex narratives. It’s not just about the individual characteristics that compel us to love the concept of superpowers and otherworldly entities, it’s the stories that come with them that pushes the boundaries even further than before.

Now the only racial issue left for the comic world to deal with is actual diversity in the writing teams, in both race and gender. If both major publishing houses can get over this hump, then the only problem left would be the quality of the stories they’re telling. But this is a step in the right direction.

SHAREFilipino band Sound Architects is banging our doors once again through atmospheric déjà vus and...