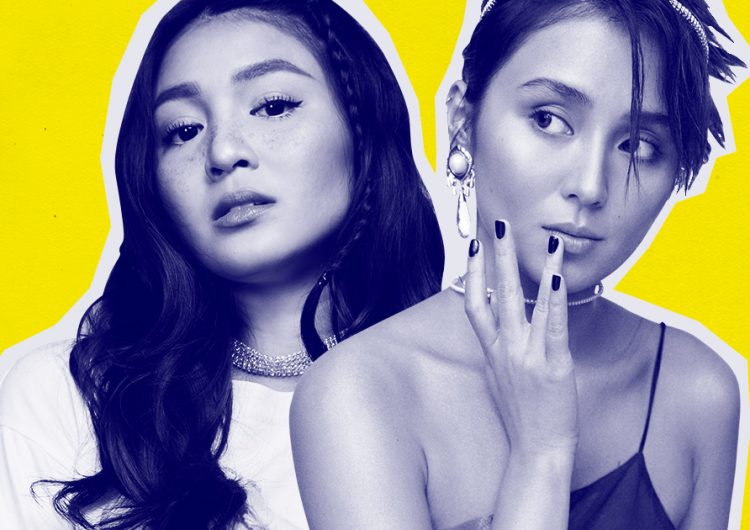 The Philippine entertainment industry is not exactly a huge universe, but there are things that couldn’t just happen smoothly. Case in point: a project with Kathryn Bernardo and Nadine Lustre together. They’re two queens ruling arguably the biggest fandoms in showbiz right now. Both of them have matured enough to explore projects without their partners, but getting them together in one movie or even an advertisement—just like Daniel Padilla and James Reid—seems impossible. Or is it?

In a report from ABS-CBN, the two actresses are apparently ready to work together. If anything, they’re just waiting for the go signal from their respective managements—Star Magic for Kathryn and Viva for Nadine.

While they’re not yet given the cue to do that much-anticipated project, we’re giving ourselves the green light to imagine possible movie concepts for these two queens—or should we say the queen and the president? Calling the attention of Star Cinema, Viva, Black Sheep, and Dreamscape, you might want to make one or all of these happen.

We need a buddy revenge film a la Thelma and Louise for Nadine and Kathryn. Picture a Tarantino-esque film meets “Telephone” by Lady Gaga ft. Beyonce flick with these two.   Both are strong independent ladies who defined themselves and kickass. What can test their chemistry than a female buddy road film? Plus, wouldn’t it be nice to see them thrive without the love team formula as a crutch?

In 2002, we met the breakout superhero we never knew we needed. Nope, we’re not talking about Darna; it’s Rufa Mae Quinto in Super B. In the movie, Super B’s ultimate mission is to beat the Flower Pot Girls, who are hypnotizing children to disobey their parents. It would be interesting to revisit their storyline and discover what led them to their wickedness. Since the Flower Pot Girls are naturally maldita yet funny, this possible superhero comedy will require them to show their other side.

Remember Judy Ann Santos and Angelica Panganiban’s quirks in Ang Dalawang Mrs. Reyes? It’d be a breath of fresh air seeing Kathryn and Nadine doing the same: planning on a secret mission, exchanging secrets over champagne glasses, and laughing hysterically while feeling their oats in their nightgowns. This on-the-go, slightly ludicrous, but also smooth-sailing storyline might just be the meeting point of the two actresses’ comfort zones, and bring out their dynamic acting prowess. From the extremes of different facial expressions to Twitter bio-worthy lines, an equally comedic and moving film—that brings out their individuality—might just prove again that the two stars can shine in anything.

Cinema has an obsession with women playing mind games with each other. We’ve seen it in All About Eve where a newcomer takes away the spotlight from the veteran actress. This is also the similar theme in Olivier Assayas’ 2014 film Clouds of Sils Maria where Juliette Binoche becomes sexually attracted to her assistant Kristen Stewart. But Ingmar Bergman’s Persona explores the cunning ways of women best.

Kathryn and Nadine could be two actresses vying for a landmark role in a theater play. They are kept alone together for a workshop in preparation for the final audition. Then, we discover their darkest secrets.

Seeing these two powerhouses in a light but empowering comedy would be fun. Imagine them as two best friends, one a power career woman and another a happy-go-lucky trust fund baby, out bar hopping in the streets of Poblacion. They get into late night shenanigans, flirt with some people, inevitably get into a fight about one being too uptight or the other being too carefree (guess which is which), and then they end up making up with a funny yet cathartic monologue—all before the sun rises the following day. I’m thinking it’ll be something like Someone Great. I would definitely appreciate a wine-tipsy sleepover scene with Kathryn and Nadine lip syncing to “Tala.”