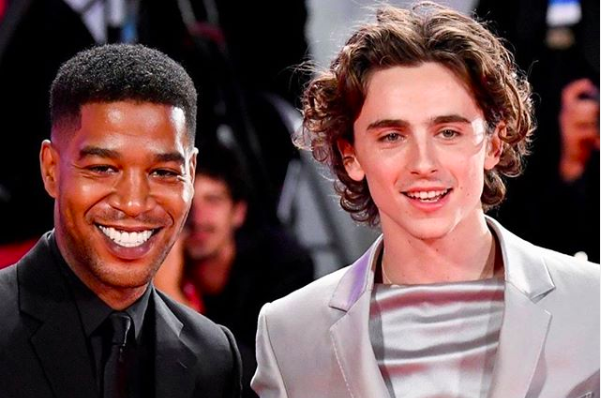 So aside from being an award-winning actor, Timothee Chalamet also has killer music taste. Truly an icon in the making.

During ComplexCon’s recently concluded first day, Kid Cudi had the celebrated actor—whom he dubbed his “little bro” in an Instagram post—open his set with a reading of Common’s “In My Dreams (Cudder Anthem)” poem in the 2009 Kid Cudi album, “Man on the Moon: The End of Day”.

The 16-line poem was recited by Timothee as he sat on stage with a single spotlight trained on him. Afterwards, Kid Cudi came out with Pusha T to perform “Feel The Love”. Timothee then proceeded to walk around onstage, head bobbing to the beat. He’s basically all of us vibing to his fire intro.

Kid Cudi and Timothee aren’t secretive about their mutual admiration of each other. Timothee once tweeted an expletive as response to Kid Cudi tweeting that Timothee’s his favorite artist. “Strike me the f*ck down,” he posted in all caps.

UHMMM OKAY STRIKE ME THE FUCK DOWN https://t.co/KcUS0avkDn

Cudi also flew out to attend Timothee’s “The King” premiere at Venice. He also invited Timothee to an extremely small birthday celebration at his house, with only Kanye, Kim Kardashian, and Pete Davidson in attendance.

Read more: A “Call Me By Your Name” sequel is officially happening and we are ready to cry again

We’re officially nominating Timothee and Cudi as one of our favorite duos to come out of 2019.

SHAREThe year 2020 has turned out to be more than a rehash of...

SHAREIs it too early to lift the enhanced community quarantine (ECQ) in areas...