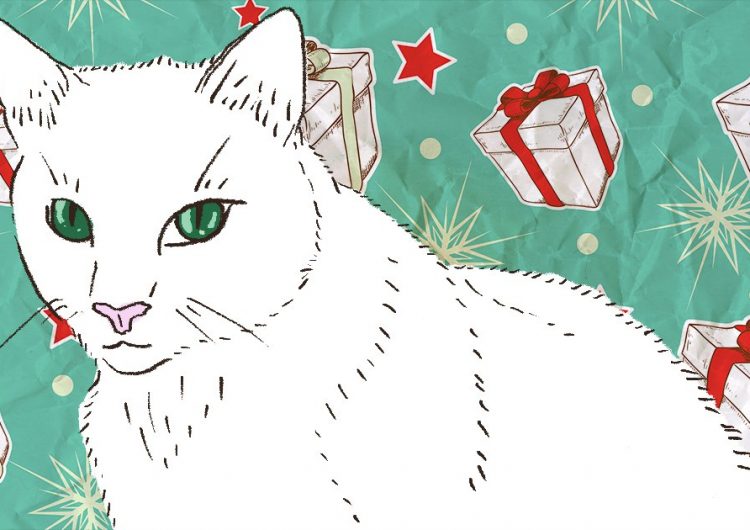 This December, we explore what it means to give and to receive— and what that exchange could imply— in a series of personal essays. Here, Giselle Barrientos narrates how a serendipitous chance encounter became a great, albeit unexpected, gift.

Are sentiments necessary? Not really, if you think about it.

We live in a transactional world, full of social niceties and expectations. It’s the mother of small talk and promises. It doesn’t matter much if it’s meant, just as long as it’s done.

It’s never felt more than during the holidays, the season of giving. We trudge along in a sea of mall crowds, trying to find the perfect gift for each relative and co-worker. Perfect—meaning something that fits your meager budget without looking like it.

It’s rarely a fun ordeal, for me at least. The mental juggling act of budgets with sentiments with practicality with ethical consumption is a lot. And so the most wonderful time of the year remains for the businessmen making coin out of it.

It’s like checkmate for the averagely financed person. Don’t give gifts and you look stingy, give one and it must be amazing or at least thoughtful—any less and you’d look lazy, or it’d be a forgotten item in the pile. But at the very least, you meet the bare minimum expectation. And so it goes for the succeeding holiday seasons.

The craziest gift I got this year was one that found its way to me and stayed there. It was a white month-old kitten, then-grayish in March of 2019 from teetering around the dirty streets of Sta. Rosa alone.

I was walking around looking for food at the time, as you do on a normal Friday night. Then I hear faint mewling near my heels. There she was, with big paws and a frail body, her pink nose mostly black with grime. I quickened my pace in an attempt to lose her, but she managed to keep up, despite the looks of her tiny body.

Against all odds, including my mild aversion to felines (I grew up with dogs and didn’t like cats’ sharp claws and perpetually snobby expressions), she seemed to choose me, following only my feet and nothing or no one else no matter how many attempts I made to shake her off. Finally, I lured her—or rather she made me think that I did—into the comfort of my partner’s garage. I inadvertently welcomed what would be the love of my life into my home.

I named her Jellybean, for her size. A cliche name I know, meant as a temporary label for a kitten I only meant to help that one night. But she wormed her way into my condo (as my partner, her temporary caregiver and full-on cat person, convinced me to keep her “for a few weeks” to think about adopting her) then my heart, and the more I spent time with her, the more I fell in love.

She changed my entire life. She’s the first thing I shop for at the grocery, the first thing I make plans for when I’m planning a trip, and now also the top subject of my Christmas wish lists (a collapsible cat carrier, good quality wet food and a bell collar, if you’re curious).

She became the number one priority in my life, ahead of cynicism, anxiety and my dislike of using lint rollers. This is a big leap considering any of the three are no small feats in my stubborn head.

As a floundering twentysomething, it’s good to have one purpose in life that I’m sure of: keeping my pet well and happy.

I learned how to read her language and listen to it. To go through ten kinds of cat food before finding one she likes, and even more variants of toys and knick knacks she liked to play with. I gave her scratches every chance I could, and forgave her when her sharp claws cut my skin. It was gift-giving outside the bare minimum, the standard I was used to. And the most surprising thing is, I wanted to do it.

You might ask what caused my change of heart. Her adorable toe beans aside, it was probably the fact that she makes me feel special. She chose me, and I chose her too, in the end. It’s an unspoken pact and a lifelong bond that I plan to see through ‘til the end. As a floundering twentysomething, it’s good to have one purpose in life that I’m sure of: keeping my pet well and happy.

Read more: Instead of gifts, why not donate to these animal shelters this Christmas?

This once unexpected stranger has become my reason to get up in the morning. And it’s for her I learned how to give gifts without expecting absolutely anything in return. It never was a transaction or an obligation with her; just pure, unadulterated care for another living being. I wasn’t quite sure I was still capable of it.

Capitalism turns me into a robot more often than I’d like to admit, but coming home to a fat fuzzball who nips at my heels and makes a mess out of her water bowl is enough to remind me of what matters.

Funny how an animal off the street can be such a potent reminder of our humanity. Capitalism turns me into a robot more often than I’d like to admit, but coming home to a fat fuzzball who nips at my heels and makes a mess out of her water bowl is enough to remind me of what matters. Unconditional love—which I’ve found is real, if you can believe it.

So to go back to my initial question: Are sentiments necessary? To merely exist, not really. Capitalism made sure of that. But to live? It might be the only reason left for it.

So, in the spirit of sincere gift-giving, I’m getting my cat a new plushie for Christmas. She might tear it to pieces within an hour of receiving it after I’ve spent twice the time picking out the perfect one, but it’ll be fine. That’s what true love’s all about, isn’t it?