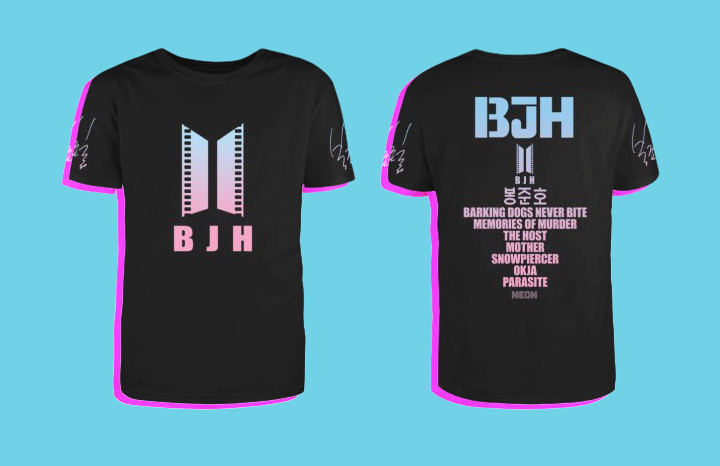 Bong Joon-Ho’s post-Oscars glow is still thriving to this day. As of now, cinephiles and film buffs alike are part of another B-Hive—the Bong Hive. And this auteur’s influence has reached the level of K-pop inspired fan shirts.

Neon, the American distributor of “Parasite” released these shirts last Feb. 28. “20 years, 7 films, 4 Oscars, and 1 Bong Joon Ho. Here are the BJH t-shirts,” their statement reads. The BJH shirts parodies K-pop megastars BTS’ logo. The back of the shirt doesn’t indicate Ho’s World Tour, instead featuring his filmography so far. The sleeves show the director’s signature as well.

If this fan shirt doesn’t fit your vibe (uhm, why?), other shirts feature “Parasite’s” iconic family portrait as well as a shirt where Ho’s eyes are censored. The last one is not available in Neon’s web store just yet. Although, the previously mentioned shirts are waiting for you to click that add-to-cart button.

Fans of both “Parasite” and BTS are both hyped about this announcement. Twitter user @lenikacruz posted: “7 films, 7 albums, 2 icons—BJH x BTS.” Another user, @rminkive, posted a video pointing out the “Parasite” cast and BTS members’ laughing at questions regarding the American public’s validation of their work.

Spoiler alert: These Asian artists will keep doing their shit—regardless of white people’s opinions about them.

BJH or BTS fans can purchase the shirts here.

SHAREIt’s been days since the film’s Oscar sweep, but the “Parasite” mania has...