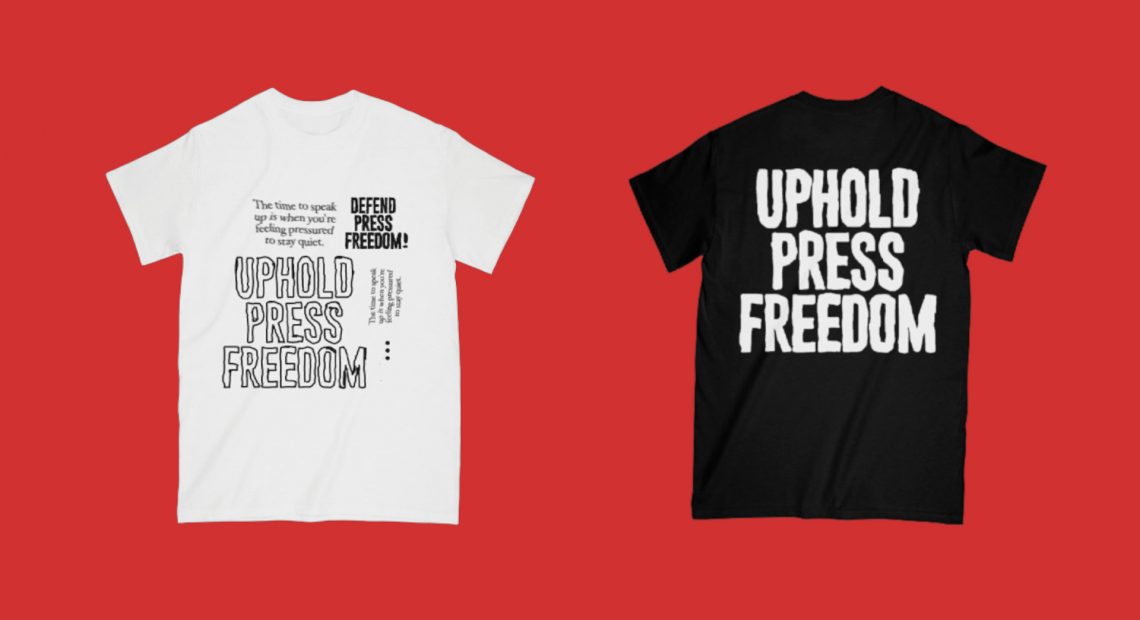 The Philippines isn’t exactly a safe place for journalists. Last 2018, the International Press Institute (IPI) declared that we live in the most dangerous country in Southeast Asia for journalists. Their reports indicate that 177 journalists and media workers were slain since 1986, with 47 deaths in the past decade.

Being a journalist has become even more difficult since the Duterte administration came to power. They cite fake news, instead of supporting field reporters putting their lives on the line. Instead of reviewing the reports of media household names like Rappler or ABS-CBN, they glorify psuedo-bloggers like Mocha Uson, Sass Rogando Sasot and DDS Facebook pages.

We live in a country where fake news can be considered real news (if the government wants it to be). It’s mind-blowing that this is happening as we speak.

@somewhere_1109 Essentially, the shirts are free! but we encourage you to pay it forward. You can fund a maximum of 2 shirts 🙂 also, Planning to do pop up screen printing sessions for this. See you around! #keephowlin

So what can we do? Defending press freedom through the picket lines is a strong form of protest. But as creatives, we can also rebel through our art. This is what the folks from the local brand Sleek/Shy Catalog tried to do with their latest non-profit release.

After debuting their clothing brand with ironic meme visuals, Sleek/Shy Catalog took on a more pressing matter: defending press freedom. Their ‘Press Freedom’ shirts are still being given away for free at Cubao Expo’s Somewhere 1109. In the future, they plan to do a pop-up screen printing session for their design.

“Speaking up or staying silent about an issue is always a choice.”

“We don’t want to make money off this,” their Instagram caption reads. “We just want a platform to support our friends from the media.”

We talked to Sleek/Shy’s Abraham Santos on their thoughts on press freedom, the place of politics in streetwear, and why everyone should speak up against the growing injustice around us.

Is the safety of the press something you’re concerned about?
Personally, this is something we’ve experienced since we had the pleasure to work for various publications before. The message is something I felt we needed to get out there. We should champion press freedom—one of the pillars of democracy. We made this piece to support the cause of our journalist friends.

We see their struggles and decided to use our platform to speak on this. And this is the medium (shirts) we think we can easily get the message across. Honestly, this is the only language (making shirts) we know.

Why produce these shirts for free?
Making profit off of this design might sidetrack the real message. We don’t want the attention. We are here to offer the resources that we have for this cause. This type of release is the way we think we’ll be able to spread the message organically (through printing it forward/live printing sessions). The life of this project will be in the hands of the community that believes in the cause.

Do you think politics has a place in the streetwear community?
The simple answer is yes, but I think the answer to this is not that simple.

“They say: ‘The time to speak up is when you’re pressured to stay silent.’ And you know what, it’s sad that we have to ‘defend/uphold’ press freedom—it should be a given.”

Out of all the given opportunities to do a statement piece like this, why now?
You know what? We should have done this a long time ago. But I have to be honest, the recent events definitely influenced our decision to push through with this, but it’s not the only reason why. We made this to champion the idea of press freedom and not a particular entity.

They say: “The time to speak up is when you’re pressured to stay silent.” And you know what, it’s sad that we have to “defend/uphold” press freedom—it should be a given.

Would you encourage more clothing brands to do more opinion-driven pieces?
Everyone should speak up, not just brands. The idea is to shed light on the issue and for us, it’s always about the message/the idea that’s more important. Speaking up or staying silent about an issue is always a choice.

Do it if you feel strongly about it. If it’s a message you really believe in and have knowledge about. DON’T do it if you’re pressured to speak just because everyone else is. But if you have the capacity to do so, why not? Again it’s always a choice.

Check out their shirts at Cubao Expo’s Somewhere 1109.