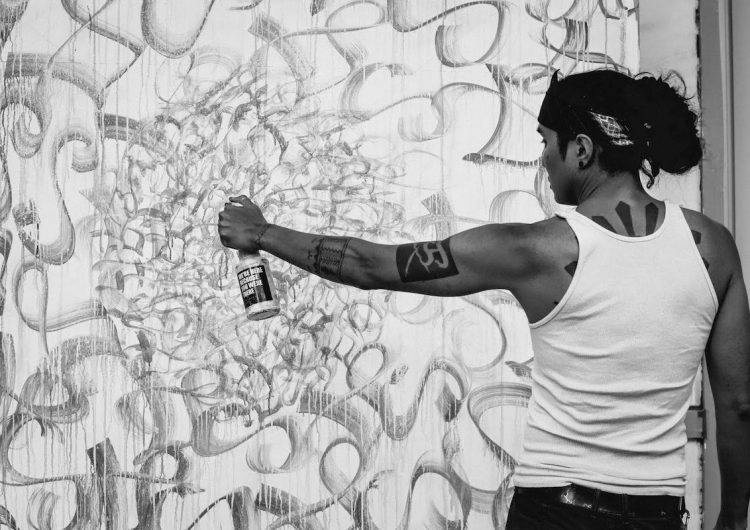 The explicit blood-like ink splats, stylized bold strokes and vivid drips of paint stains that flow from the tip of Manila-born, San Francisco-bred artist Kristian Kabuay’s calligraphy brush may look nonsensical at first look but to the trained eye, they spell Tagalog words in one of the Philippines’ pre-colonial ancient scripts: Baybayin.

Influenced by graffiti as well as traditional Asian calligraphy, Kristian’s work is a fusion of old and new. Every stroke, every mark, every character is an ode to his birthplace—a way to reconnect with his roots and fulfill a constant yearning to understand his cultural identity as a Filipino-American immigrant from the early 1970s.

To Kristian, being a self-taught Baybayin artist is more than just creating art that incorporates Baybayin. “At surface level, it simply means that I write Baybayin artistically. On a deeper level, I help connect Filipinos to their culture and ancestors.”

“My art is didactic in nature,” he continues. “My works both entertain and instruct, while exploring themes of identity, poverty, death, love and duality. By blending the ancient script with contemporary aesthetics, my work bridges time and space as well as challenges the necessity of economic value to prove our cultural heritage worthy of preserving.”

My art was borne out of the diaspora experience I went through. Art is a tangible way for me to reconnect with my culture.

While it may be odd for many to think that a Filipino-American who grew up abroad has made it his mission to preserve and educate other Filipinos about a forgotten culture, Kristian finds it logical.

“I have the privilege to explore and practice our culture. Most Filipinos in the Philippines don’t need things to feel more Filipino because they already live there, speak the language and deal with the realities that prevent them from exploring these types of things. Most people back home have to deal with the harsh realities of life. There’s little time to do so; three-plus hours a day in traffic kills culture. My art was borne out of the diaspora experience I went through. Art is a tangible way for me to reconnect with my culture,” he says. Now, his artwork can be found as permanent tattoos on the skin of other Filipinos.

Since publicizing the official website Baybayin.com in 2007, he has built an automated Baybayin-teaching bot on his own Facebook page that teaches a five-day crash course on the basics of Baybayin for free, and started an all-Baybayin publication called Surat in 2017.

Currently working on an updated “Introduction to Baybayin” book, a film titled “Sulat ng Malansang Isda,” officially launching his online school for Filipinos abroad called Balay School and an upcoming move back to Manila, Kristian sat down with us to talk about his humble beginnings and eventual “irrelevant” ending. 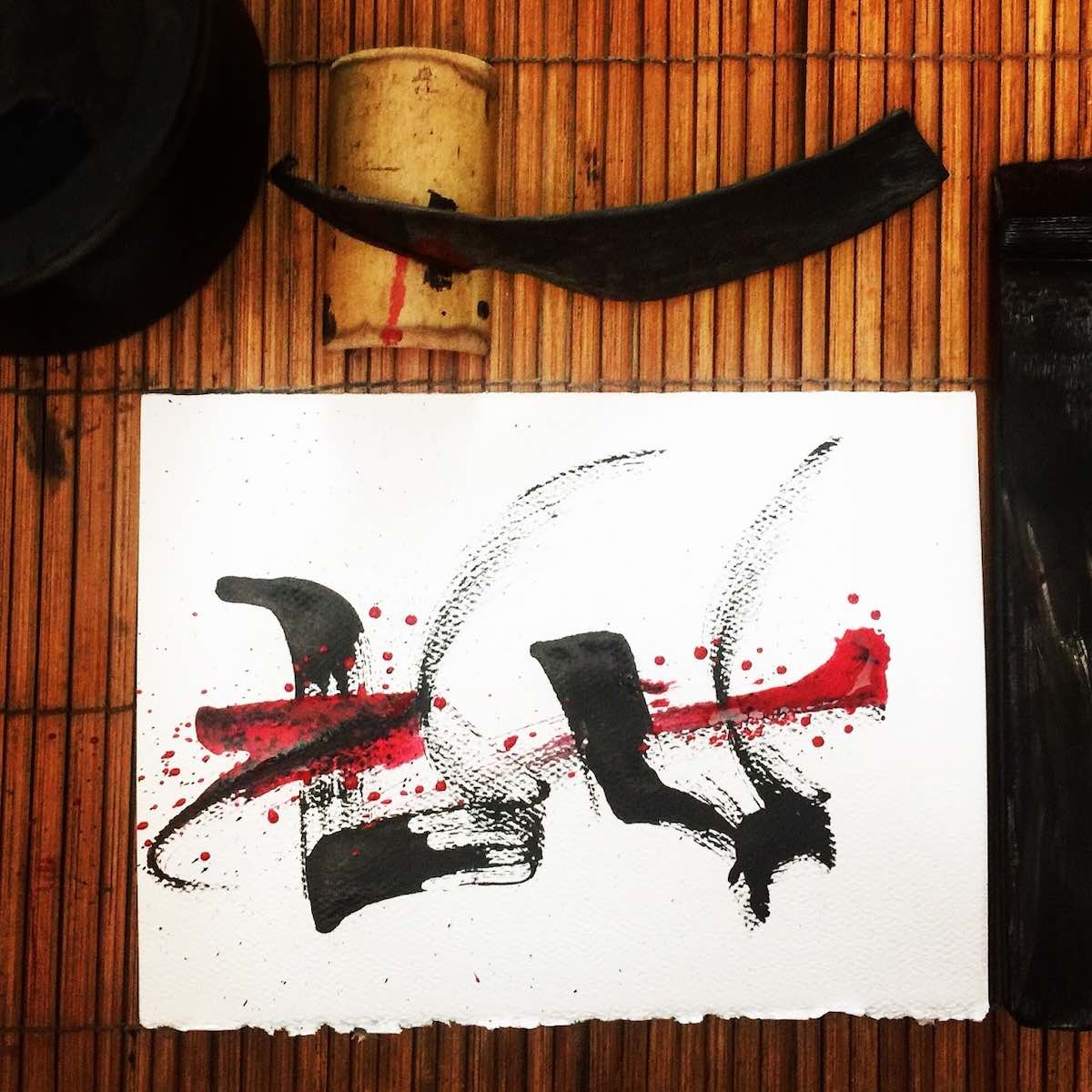 When was the first time you encountered Baybayin?
I first saw the “Ka” symbol on a Katipunan flag in an encyclopedia while reading about the Philippines in a public library when I was in high school. At the time, I didn’t know that it was our writing system. I thought the symbol was a capital “I” that stood for “Independence” instead of “Katipunan” in the Baybayin syllabary. One day, I went to a Filipino festival and saw a poster with the symbol on various flags, and I tried to show it off to the store owner saying it was a capital “I.” He quickly corrected my saying that it’s “Ka” in our old alphabet. After that, I started to look for more information.

What information did you find?
When I moved back to the Philippines after high school, I went to this temple called Megamall and found a chart in a book I bought at National Book Store. There, I learned the very basics but without the historical context. I learned that from a white guy in Canada named Paul Morrow, who became my email penpal.

Understanding my past gives me clarity and peace of my present path for the future. I look to bridge the gap between the past and the future.

As a preserver of Baybayin, what cultural significance does it hold for you?
Understanding my past gives me clarity and peace of my present path for the future. I look to bridge the gap between the past and the future. Reconnection is important, but it’s about applying the knowledge of the past. Through Baybayin, I became more fluent in Tagalog (I refuse to call it Filipino), as well as other languages. As I searched for more knowledge, I found like-minded people and now belong to multiple communities of cultural practitioners from dancers to tattooists. I also learned about our Austronesian cousins across the Pacific.

What can you say to people who might say that practicing Baybayin art is the “trendy” thing to do, or that it is possibly touching upon cultural appropriation or exploitation?
The people that say that it’s “trendy” like it’s some TikTok dance don’t know what they’re talking about. It’s usually from someone who doesn’t practice it that does all the shit-talking. And if it is trendy, so what? It’s part of our culture. As for cultural appropriation or exploitation, they don’t know what they’re talking about either. For some reason, people can’t tell the difference between the script functioning as art or as communication. I’ve consistently seen comments that they can’t read the artistic calligraphy piece, but we don’t do that with the Roman alphabet. We can clearly tell what the function is. Baybayin can be art, and it can also just be a boring writing system. Writing isn’t associated with a specific ethnolinguistic group. Baybayin is a generic term. Nobody owns it.

My art is didactic in nature. My works both entertain and instruct, while exploring themes of identity, poverty, death, love, and duality.

What’s your tip to those who are afraid of culturally appropriating?
1) Ask yourself: Is it going to make me look like an asshole?
2) Get permission
3) Have a track record of working in the space you’re entering
4) Educate
5) Financially support the group you’re interested in working with 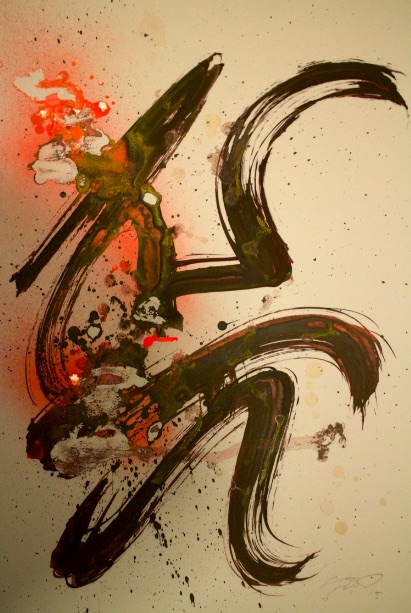 What’s an upcoming project you’re most excited about?
Launching Balay School. It will be launched mid this year. People can sign up to get notified on balayschool.org. It’s an online school aimed at Filipinos in the diaspora. The first class will be on Philippine scripts. While it’s easy to learn the basics online, the historical, social and economic context are not. That is what my courses will focus on, and I have been testing my curriculum around universities, organizations and businesses for the past five years.

Ultimately, what is your goal as a Baybayin artist?
My ultimate goal is to become irrelevant because that means that the practice has become normalized. I will then pivot to something else.

Read more:
The do’s and don’ts of Baybayin according to this artist
Pixar artist Bobby Rubio is working on an Arnis hero in new comic book
This graphic designer turned jeepney art into a downloadable font

SHAREIn such troubling times, it’s not only sobering, but actually superbly comforting to...

SHAREJust a while ago, we wrote about the best coming-of-age series the current...

Mica Abesamis is a visual artist, Twitter ate and a really cool mom