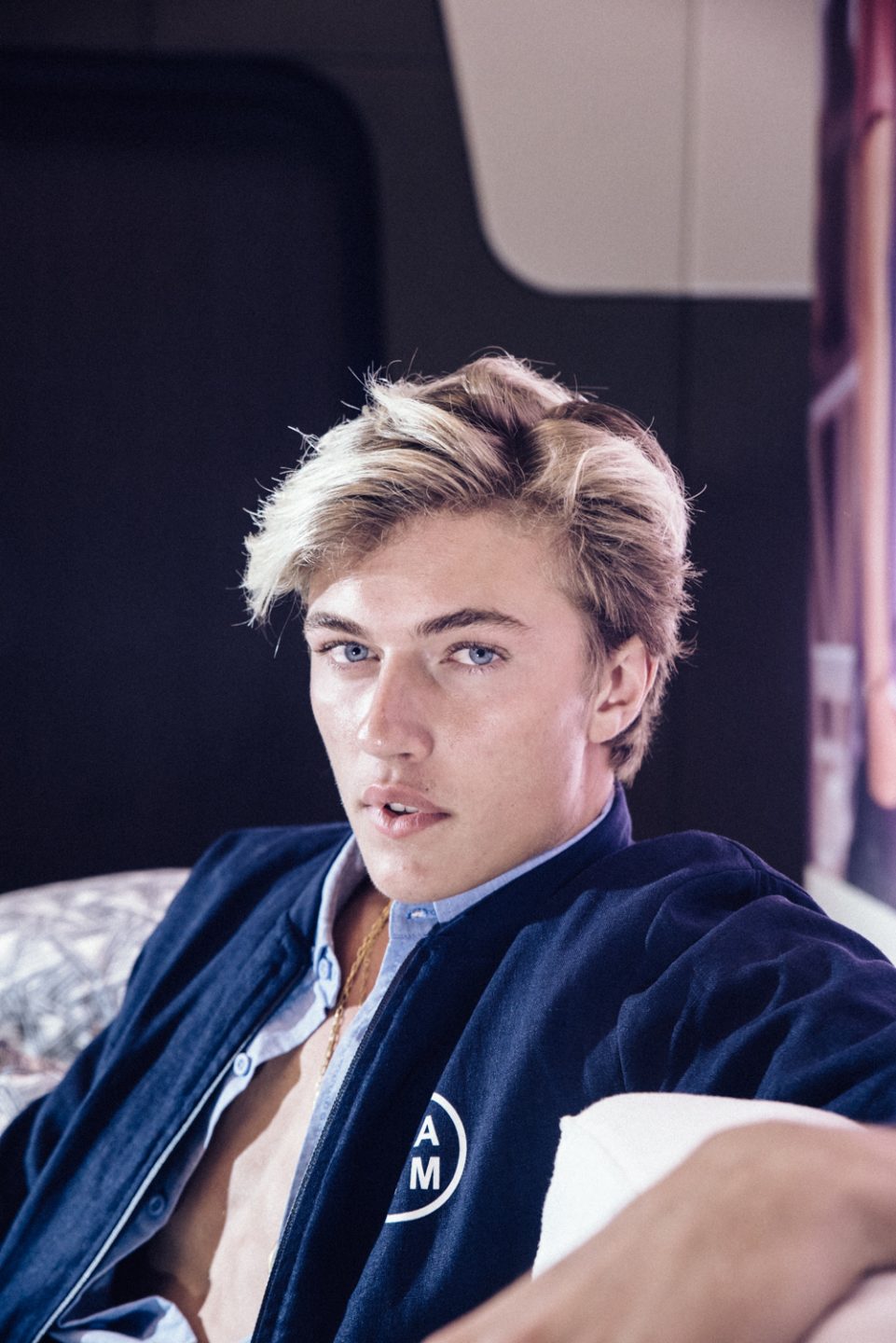 “The angle has been approved,” Scout graphic artist Grace de Luna announced to me in an almost theatrical fashion. “You’re going on that date.”

“What,” was my answer, not exactly the most common way to respond to the news of scoring some time with probably one of the hottest guys on the planet.

A couple weeks ago, our features editor had assigned me to cover Penshoppe’s press conference for their shiny new ambassador, Lucky Blue Smith. The press conference included a 10-minute one-on-one interview with him as well as a fashion show meant to launch their new line of clothing.

Since Grace knew a hell of a lot more about this dude than I did, I sought her advice to find a story angle that would make Scout distinct from others. And voila—there emerged the suggestion of a three-minute video “date” with the Utah-born model. All the other employees around us who’d heard our conversation sniggered and told me to go for it.

You’d think I’d be more ecstatic to hear that I’d be going on a date with international heartthrob, model, and fashion it-boy Lucky Blue Smith—beautifully lanky stature and googly blue eyes and all that. Lucky me. Wink wonk.

I’d tried my best to relent. I’m terrible at flirting, terrible at getting dates in actual real human life. I was probably going to ruin the entire video with my godforsaken awkwardness.

How about we just film the interview and post it online?

What if we ask him about all his favorite pop culture things?

How about some quickfire questions with him then we shoot a video of it?

“Another magazine did that already.”

I was defeated. Whether I liked it or not, I was going to date Lucky Blue Smith. 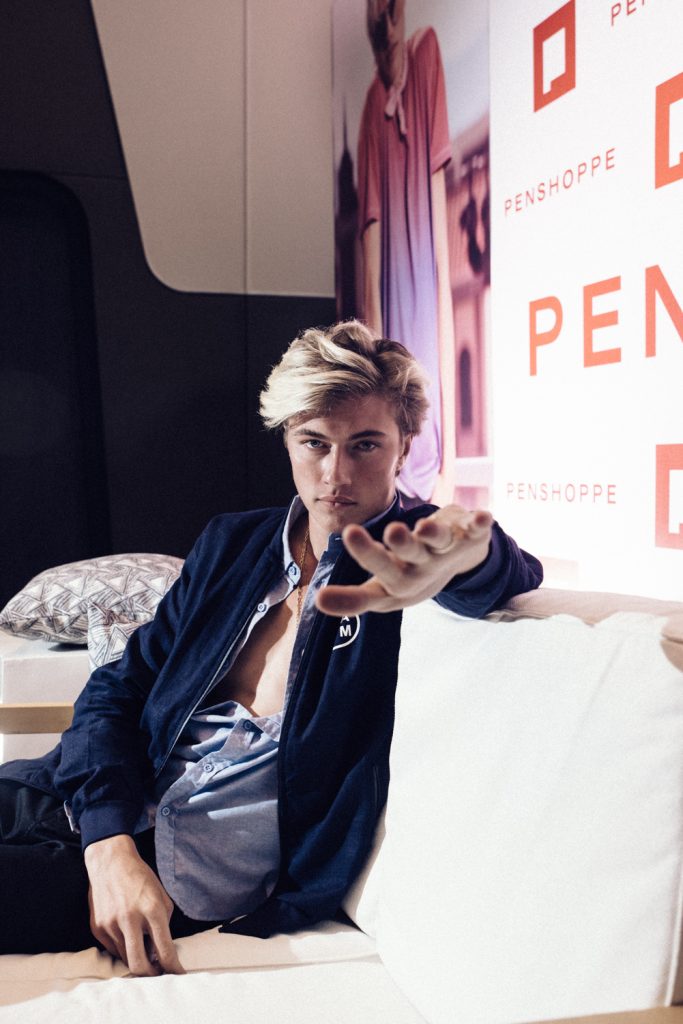 Friday, July 29, the day of the press conference. And also apparently the day that Lucky landed on Philippine soil early in the morning.

Media people from various magazines, newspapers, channels, and websites showed up early to a buffet lunch at Conrad Manila as we all waited for the arrival of Penshoppe’s freshest ambassador.

And it wasn’t long before he did show up, clad in boots, black skinny jeans, a navy blue jacket, and a shirt buttoned only half-way up his torso. Despite having only arrived in the country, he still managed to look youthful and vibrant. Lucky waved to the crowd and held up peace signs for the press so behold. I was slightly disappointed that he wasn’t sporting his iconic platinum blonde hair, but whatever.

The press conference began with the usual chatter about him being so excited to be in the Philippines. He seemed game enough, candidly expressing his enthusiasm over representing Penshoppe. Lucky eventually answered a few questions from Scout, including the fact that he’d find it the most awesome thing if he got to work with Academy Award winning actor Leonardo DiCaprio. So all was fine and dandy—Lucky was a cool guy who was just excited to meet his fans. We were all the more determined to make our story work.

If only we knew what was about to happen.

Our staff photographer, Patrick, informed me and Grace that we were the last ones to be called in for our 10 minutes of life and death.

“It’s good,” he’d said optimistically. “We have loads of time to prepare.”

Patrick was constantly fidgeting with mics and lapels and cameras, wondering how the hell we were going to fit a video date (with an additional interview) and prep time all within the span of 10 minutes. I repeat—10 minutes. It wasn’t long before his anxiety seeped into me.

“I don’t think we have enough time to do the interview. Let’s prioritize the date thing,” I suggested, convinced we really couldn’t fit everything in that time frame.

“Okay, here’s the plan,” Grace said. “The both of you set up while I brief him the best that I can. We’ll film do a one-minute or 30-second video of him asking the viewer out. We can do this.”

We had an hour before our turn and we’d spent it talking to the various other media folks who’ve gone in.

Not enough time. They’re going to cut your minutes down.

You can’t even prep up much. Everything was so fast.

Just go in and take some shots. That’s the most you can do.

Twenty minutes before our schedule, the Scout team waited in front of the room (along with a long line of Filipino LBS fangirls) where they held Lucky’s press encounters. Patrick, still fidgeting. Grace, still trying to calm Patrick down. Me, still expecting the worst. Based on every person we saw step out, including two incredibly-hassled bloggers and a heavily-gasping one-woman team from a local network, all I could think was that this probably wasn’t going to end well.

But 10% of me had the slightest glimmer of hope. Lucky seemed cool during the public press conference. I’m sure he’d love the idea. Perhaps he’d be as candid as he was then.

Based on every person we saw step out, including two incredibly-hassled bloggers and a heavily-gasping one-woman team from a local network, all I could think was that this probably wasn’t going to end well.

“I’m not really down with their idea,” Lucky, looking very, very visibly exhausted, said to his representatives after Grace had briefed him.

Before that, I hadn’t even gotten to introduce myself since I was busy trying to figure out how to turn off Patrick’s brand new flash. And because of the time constraints, I didn’t even get to pause and reassess everything. As he tried to speak to his management, I was already grabbing my interview question sheet and climbing on the platform to interview him.

“I have the questions with me,” I announced before anyone else could argue with us.

Lucky noticed this and pointed at me. “You’re doing the interview?”

I started without any other formalities, fired these questions away as fast as I could.

Do you have some things about yourself that you’re insecure about?

Are you obsessed with anything in pop culture nowadays?

What was the best part about your childhood?

“Just liked the bit about being a kid and being young, really.”

If you weren’t a model, what would you be doing now?

Do you have a certain life philosophy that you strictly stick by to?

What would you want to be best known for?

I was smiling at him but at the same time I was crumbling on the inside while he gave me mostly one-word and one-sentence answers. An interviewer’s nightmare.

We couldn’t blame the guy. Despite our disappointment, we really couldn’t bring ourselves to point fingers at him. Considering the fact that he had just arrived from what probably was a long-ass flight that morning, as well as tiring media interviews that most likely asked him the same stuff over and over again, Lucky Blue Smith was a trooper who’d went through it all with a big smile on his face.

And so it was over and our team walked out of the room, not-so-slightly defeated. We watched on hopelessly as he came out of the room and graciously greeted his fans. Though he wasn’t in the mood to answer our questions, it was rather inspiring seeing him still gamely interacting with his fans after everything that transpired before.

Honestly? We couldn’t blame the guy. Despite our disappointment, we really couldn’t bring ourselves to point fingers at him. Considering the fact that he had just arrived from what probably was a long-ass flight that morning, as well as tiring media interviews that most likely asked him the same stuff over and over again, Lucky Blue Smith was a trooper who’d went through it all with a big smile on his face.

Also, he had just turned 18—pretty mature and amazing for someone that young. That was all that really mattered here. It was a miracle he even nicely answered our questions. Had I been in his place, my 18-year-old self would have probably locked herself in a hotel room right after that exhausting flight, no joke. And alright, alright, I guess we were a bit too ambitious considering the already-short time frame that was cut even shorter. Nonetheless, we learned our lesson.

We opted to stay for the Penshoppe fashion show to get even more material and photos and it was a lot better than that cooped up interview inside a cold, brightly-lit room. It was then when we saw Lucky in his true element, being the millennial fashion icon that he is. It was still pretty awesome meeting someone so huge in the fashion industry and witnessing his charmingly flustered self walk the runway as fans screamed on. We caught that one great moment on our Snapchat, wherein Lucky broke his fierce model-character, shaking his head and grinning to his feet at all the vocal attention he was getting.

It was a memorable experience that had both its ups and downs. Any regrets? Nah. Despite stuff we definitely weren’t expecting, it was kind of worth it.

So, with all that said and done, cheers to you, Lucky Blue Smith—you’re a star.

Video and photos by Patrick Segovia

SHAREIf you’re looking for low-budget activities or missed out on old Cinemalaya films,...

SHAREEveryone knows Anthony Bourdain in two ways: vaguely, through peripheries or obsessively, through...