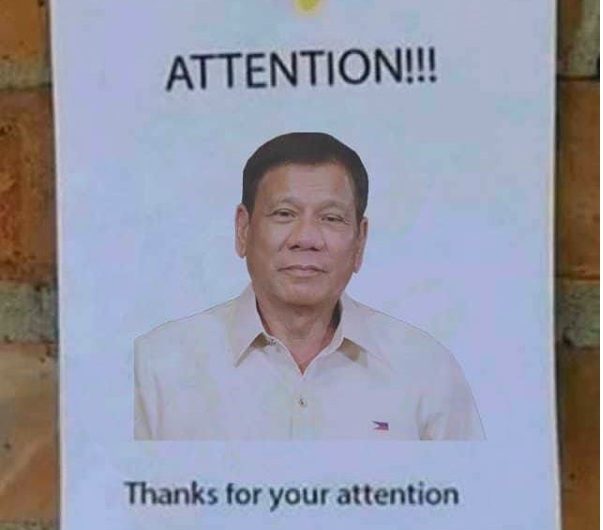 “So gusto ko lang malaman ng sambayanang Pilipino na I take full responsibility, na ang utos ko na dalian mo. Wala akong pakialam kung saan ka magkuha, magnakaw ka and I remember saying it. I do not care whether you go and steal, borrow or kill to get what needs to be done,” said Duterte in his late-night public address on May 26.

Does this remind me of WWE wrestler Eddie Guerrero’s wrestling persona? Yes. Is it appropriate for a public official, let alone the president of an entire nation, to say this? No—but he said it anyway (as he often does).

Department of Budget and Management Usec. Lloyd Christopher Lao informed the public that the PPE provided by the government for medical frontliners meets local and international standards. So far, the most expensive in the set is the “Ebola-level” coverall that costs P1,100 (locally-made suits cost only P850).

Last May 18, The Senate wanted to look at alleged irregularities of in the procurement of PPEs. According to ABS-CBN’s report, “Sen. Grace Poe said the government bought hazmat suits for P1,800 each when market prices ranged between P400 and P1,000. On Sunday, Sen. Panfilo Lacson said some coronavirus testing units worth $12 (P600) per kit were procured at $32 (P1,600) each.” Senator Panfilo Lacson also called out the alleged overpricing of COVID-19 test kits as well. In his statement, he said an automated extraction machine from the manufacturer Sansure Biotech should only cost P1.75 million, but the government purchased a unit that costs P4 million each.

“I told him, ‘do everything you can.’ He said, ‘there [are] so many propositions.’ I do not care. If it’s not cheap, if it is expensive, go—just go ahead and do something about it kasi ipit na tayo dito (because we’re in a tight situation),” adds Duterte. “I remember distinctly very well that noong napag-usapan ‘yung 200 billion na ibibigay ng Congress…sinabi ko huwag na huwag ninyong—do not fuck up with this pera because it’s really blood money now needed to keep the nation alive.”

However, Senate Minority Leader Franklin Drilon questioned the overpriced COVID-19 test packages offered by Philippine Health Insurance Corp. (PhilHealth). “PhilHealth has a package of P8,150 for the test, I think this is a little overpriced,” said Drilon during a senate hearing last May 19. The cost of a COVID-19 test is P2,710 if the testing was paid for by DOH and the test kit was donated.

“I call for a fair and impartial investigation despite the president’s pronouncement. These are taxpayers’ money we’re talking about here—to the tune of billions of pesos getting wasted due to corruption or gross negligence,” he adds.

Read more:
Duterte expresses his quaranfeels through a song
While Duterte’s tired, these young Filipinos remain restless
All the times Duterte is the definition of ‘bastos’

After 19 years, PUP College of Law has its first top 10 Bar placer

SHAREPour one out for PUP College of Law, everyone. After nearly a 20-year...