Ah, Minecraft―the hilariously chaotic and whimsical world of blocks, diamond swords and endless exploration. You’ve seen your favorite YouTube personalities sit through hours of playthroughs. You’ve probably tried it yourself and froze at the first sight of a Creeper. You’ve most likely seen the countless memes all over the internet, too.

Beyond its memey-ness, the decade-old (but still widely popular) sandbox game continues to provide an ideal platform for players to challenge their logic and creativity, giving them the liberty to create anything within its blocky virtual world.

Take these guys, for example: This group of students from University of Santo Tomas (UST) spent quarantine letting their creativity loose on Minecraft, spending over a month recreating the historic structures of the 400-year-old university. They’re called UST Minecraft, and they’re here to change the way gaming is perceived.

Missing UST or just want a place to chill? Join our server with your friends as we release your college skins to venture out and roam the world of Minecraft in UST.?

What started as a fun passion project between a couple of friends has reached places even beyond the four corners of the university, turning into something that many members of the Thomasian community are anticipating.

Right now, they’re still testing the server and making sure everything’s in place before the official release, but we got the chance to sit down and chat with five members of the team: Team head Charles Nobleza, team admin Julian Cruz, interior designer Samantha Nablo and team builders Robert Lardizabal and Noemi Roslinda.

To them, Minecraft is more than a game: It’s a piece of culture, a place where you can create anything from a little fort to relive your childhood memories to full-fledged, functioning virtual spaces for other people with shared interests. In our virtual meet, we talked Minecraft tips, passion projects and the pandemic’s impact on students like them. 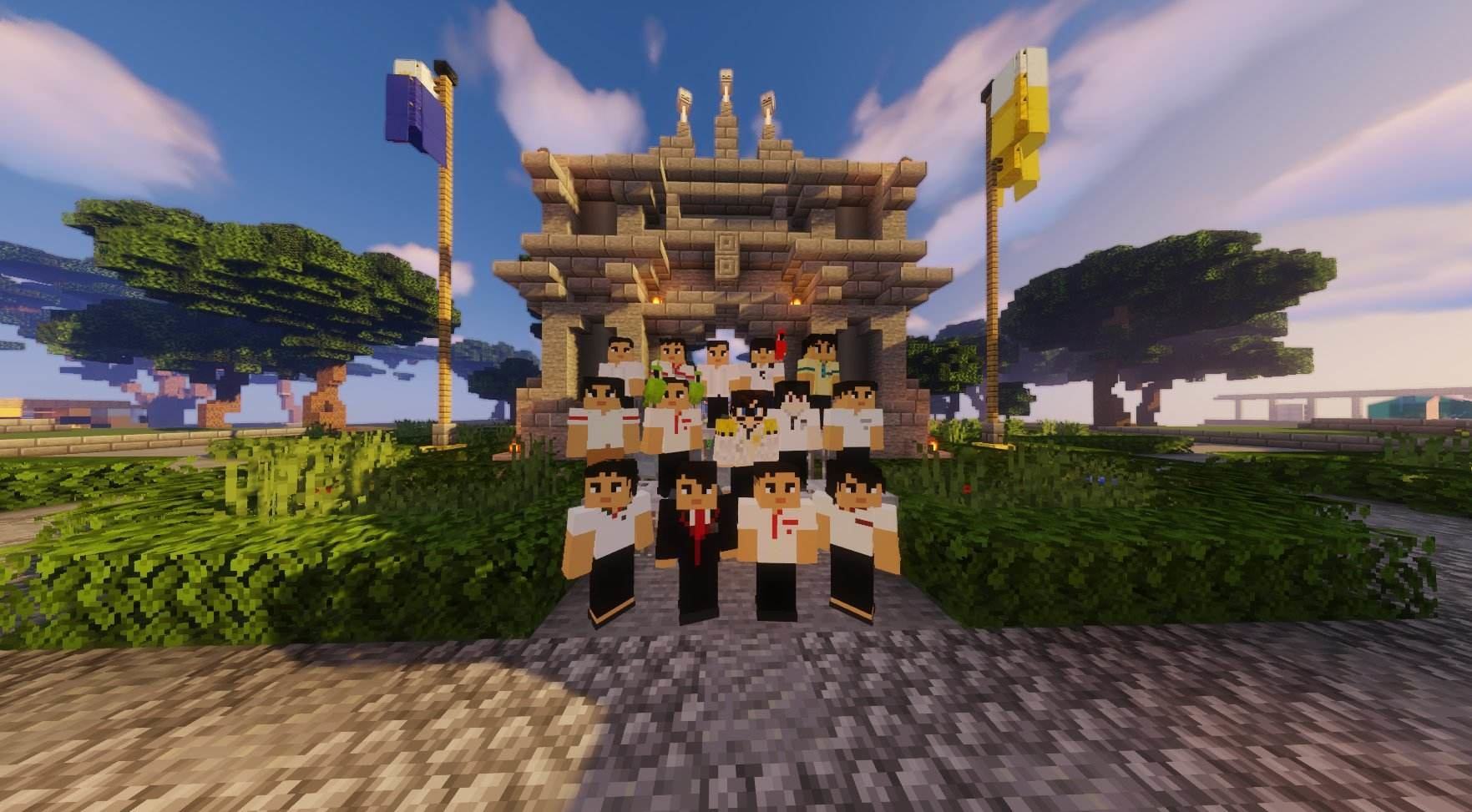 Some members of the UST Minecraft team, their in-game characters posing in front of the Arch of the Centuries

How did this project start? Who pitched the idea?

Charles: The idea started when a couple of friends and I were playing Minecraft, and I joked na parang, ‘Guys, why not build UST?’ Tapos ‘yun, tinatawanan lang namin at first. When we heard na wala na ‘yung Freshmen Walk, naisip ko: Ang sad naman kung hindi itutuloy ‘yung tradition, so I started the project with the help of my friends. We first built the Arch of the Centuries, the Benavides Park and then the Main Building. I think that was a good start to get people on board the project, so I tweeted it to get the word out. We basically want na matuloy ‘yung tradition natin as Thomasians.

Out of all the other sandbox games available, why Minecraft?

Charles: I chose Minecraft because it’s like the starting base for a lot of games. It pushes you to be creative and imaginative so you can build kung ano ‘yung gusto mong mangyari. Minecraft has an educational aspect din because it increases your logic.

UST is quite a big campus, so how did you plan its construction on Minecraft? How did you divide your tasks?

Charles: I decided to beef up the team with builders, assistant builders, floor planners as well as interior designers. We also have people responsible for the small details, para maging lively naman ‘yung campus. We also have special roles like tree specialists and map artists kaya diverse talaga ‘yung team.

Julian: We also have a member who’s an architecture student na skilled sa Minecraft. He helped us fix the ratio of the buildings sa server with Google Maps as a reference to be as close to real life as possible. From there, bumilis ‘yung progress kasi may idea na ‘yung the rest of team where to build and gaano kalaki ‘yung i-bi-build. 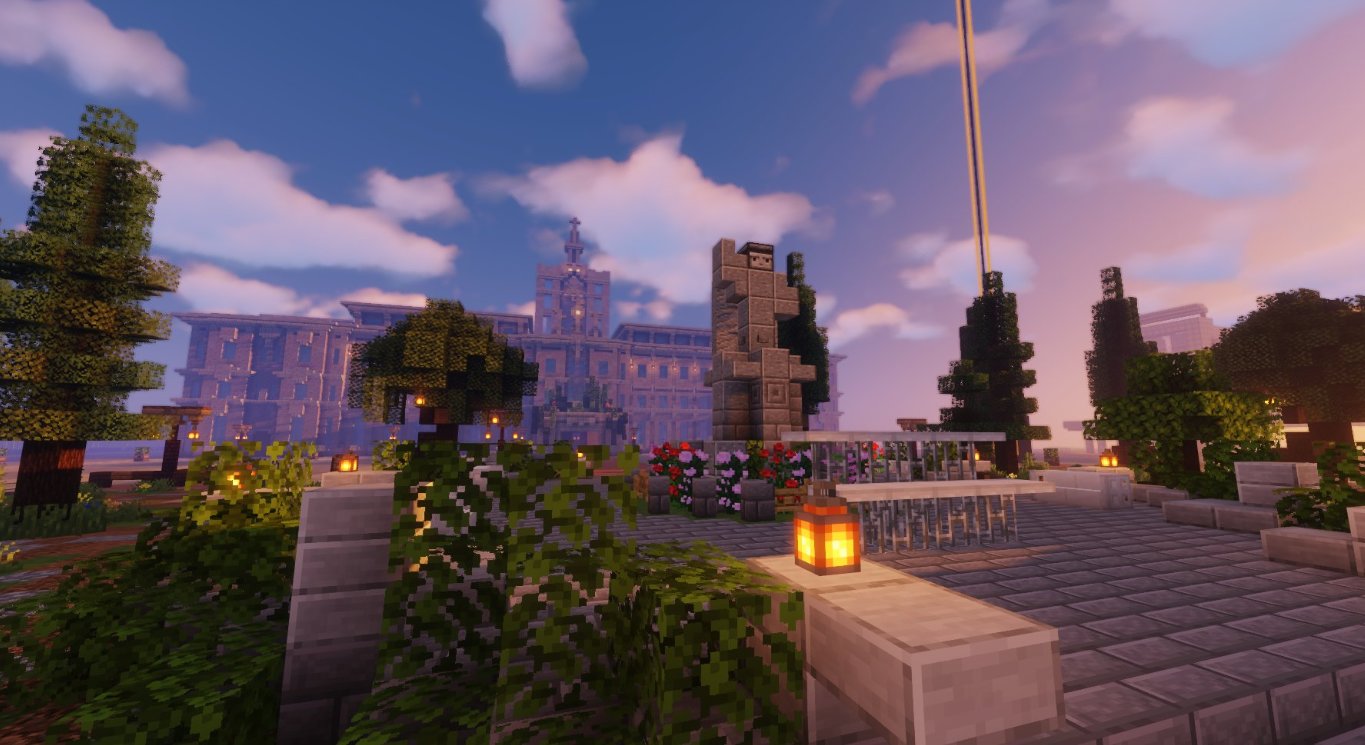 How do you visualize detailed structures in real life into their Minecraft counterparts?

Robert: Thinking outside the box is important kasi may mga limits ‘yung blocks ng Minecraft. ‘Yung look po talaga ‘yung tinitignan namin instead of what it actually is because you can imagine something to be another thing to represent it. Like if we need chairs for classrooms, we repurpose stair blocks. We think outside the box to make the buildings recognizable.

Charles: I sketch first from the street view on Google Maps, then redraw in the perspective of Minecraft. Then I collect the blocks na puwedeng i-match from the Minecraft counterpart.

What’s the most fulfilling part of creating this server?

Julian: As the build progressed and naging accurate na po ‘yung project sa real-life counterpart, I can’t help but reminisce. Like, nakakamiss naman tumambay after class and hang out with my friends around the campus.

How are you guys holding up? How did the pandemic affect you as students?

Noemi: It’s difficult to concentrate and separate your academics from your personal life. But it’s a good thing na UST has its own platform for online classes, which at least helped us deal with online classes kahit nangangapa pa. 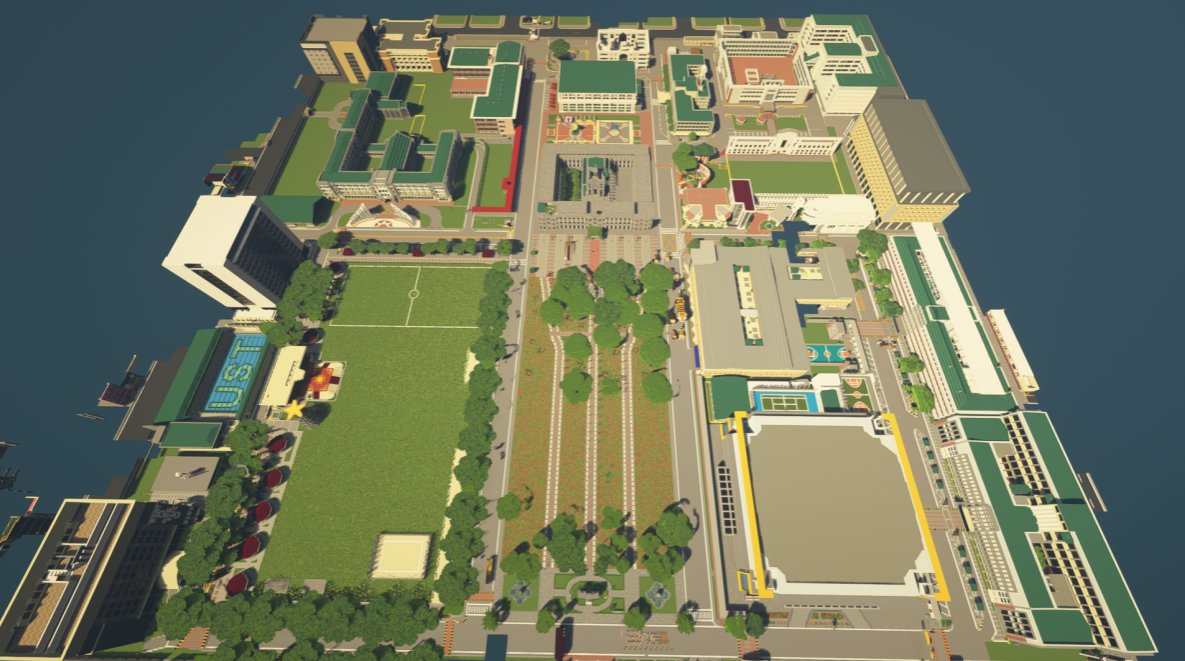 Aerial view of the campus on Minecraft

How do you hope your server would stand out among other virtual spaces that have emerged since the pandemic?

Charles: The server has been growing since we started it, and we’re open to creating social hubs to connect with other schools din, kasi I heard some have their own Minecraft servers na rin.

Robert: It can work as a destresser din. ‘Yun din kasi ‘yung mahirap sa online classes, we don’t have time to walk around and relieve stress or hang out with friends. But now with the server, the students can use it when they have time after academics to destress.

You created something so many are anticipating. What’s next for UST Minecraft?

Charles: I am foreseeing a new era of gaming in the UST community. The usual image of gaming is, “Ah, tambay. Di pumapasok.” I think this project may change gaming’s image to the university. I believe gaming is very important to our generation so our students can have more avenues to channel their creativity and see their ideas grow and develop.

Samantha: With our server’s continuous growth, I think it can also encourage the university to grow with our generation as well. ‘Di naman maaalis sa character ng university to be reserved and traditional. But I feel that our Minecraft server can push them to implement more tech-savvy ways to engage the Thomasian community.

This story is part of our #SeenOnScout series, which puts the spotlight on young creatives and their body of work. The UST Minecraft team and many other creatives shared their work at our own community hub at Scout Family and Friends. Join the Scout Family & Friends Facebook group right here, and share your work with us in the group or through using #SeenOnScout on Twitter and Instagram.

SHAREIf you aren’t paying attention to P-Pop boy band SB19 yet, just a...