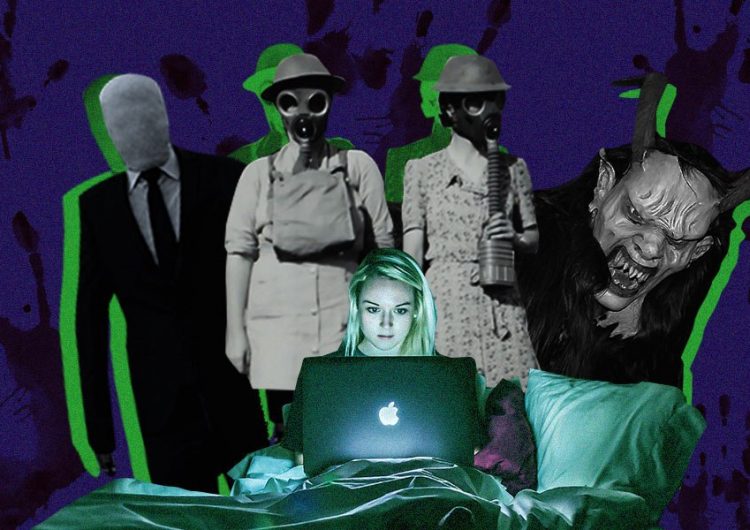 In the early 2010s, sending Creepypasta links from one chat box to another became a collective thing across the internet (OK fine, chain mails too). Like a sequel to the Y2K classroom activity of swapping “True Philippine Ghost Stories” books, it was the complete nightmare fuel—boasting themes from the macabre and the gore to the paranormal. At one point, these short stories made us hold our pee to shield ourselves from the unknown creatures of the night.

As for me, a 22-year-old often-numb Scorpio, I’m not quite sure if it’s still the same. Not to be that edgy kid, but I’ve been feeling indifferent towards spooky narratives lately. I don’t exactly remember how this started, but one day I suddenly found myself throwing an NBD mood in jumpscares and frightening close-up shots. I’ll never be the horror film Final Girl for sure but does it mean I won’t enjoy horror fics anymore?

Since it’s Halloween season and I haven’t touched the Creepypasta site in ages, I thought of testing myself in the scared-o-meter. Do the classics still hold up? Will they scare me like the future does? Here are three classic Creepypastas I tried to re-read and my immediate word vomit.

Ah, The Slenderman. A household name not just for conspiracy-loving internet kids but even to those who couldn’t care less. I remember a high school seatmate who convinced me countless times to check the story out—and the A to Zs of its appearance was enough to give me goosebumps.

“The Slenderman” follows the story of a tall, faceless ghost in a suit with lanky, long limbs. This creature is believed to prey on children the most, and its detailed pseudo-historical background probably won’t help readers to convince themselves that this is just fiction.

Characterization-wise, it really is memorable. In a sea of chopped off heads and blood-soaked smiling faces, The Slenderman’s image stands out. He has the top trait of a good mystery: (literally) vague. If ever you’re trapped in a situation with him, how can you possibly take your way into escaping? But though it’s alarming, I found myself more distressed in other parts of the story.

Coffee falling and burning the main character’s bare legs were more horrifying than the “chill” she kept feeling. At times, it felt predictable. Though the sequence of hospital events was spine-tingling, it didn’t really leave any lasting mark. Was it because The Slenderman’s entrance fell short? Maybe. Was it because I didn’t really know what his intention was? Maybe. The build-up and follow-through would’ve prompted a scream or two. But hey, I still understand its OG label.

I braved through this story with little to no memory of the events (maybe because my attention span back then was poorer). Honestly, I thought this will just be another scary “campfire with friends” tale that’ll bank on screaming and chasing. And I’m happy to be proven wrong.

A common favorite in Creepypasta fans’ listicles and Reddit threads, “Anasi’s Goatman Story” follows a teenager who heads to Alabama with his extended family to camp out in the woods. As conversations died down, so did their metaphorical safe bubble. And it starts with a distinct scent.

The smell—perfectly detailed like suffocating ozone, metallic and the back-of-your-throat kind—was one of the story’s strongest points. The story progressed realistically, benefiting from the horrific smell still lingering under our noses. Before we know it, we’re doubting our own memory in this trip we immersed ourselves into. How many are we again? The narrative’s strategy heavily places us in the main guy’s POV, forcing us to second glance at everyone we meet and question our deja vus. Without warning, we meet Goatman—a smart stalker in the woods.

There are many good points in the story: the reasonable timing at crying, shouting and doubting; their shared innocence despite their decision to fight back; the different locations they went to that explain their panic; and the disorienting mess that is the whole story. Wait, I hope Goatman isn’t reading this.

Look, I knew I was doomed right from the start. What can you possibly expect from five people being lab rats in a tank of experimental gas for 30 days—with a no-sleep rule to boot?

This story would be Peak Gore, I thought, and the preceding events just intensified it. And in that case, I’d prefer letting you close this tab and read the story yourself. Just make sure you’re not in the faintest state today.

(But if ever you’re down for more clues before proceeding, here are no-context incidents that bothered me throughout the story:)

SHAREAre y’all still recovering from the emotional ride that is your fave BL...

SHAREIn 2019, Off-White was declared as one of the hottest brands in the...

SHAREKanye West and The Office is one priceless combination we never knew we...