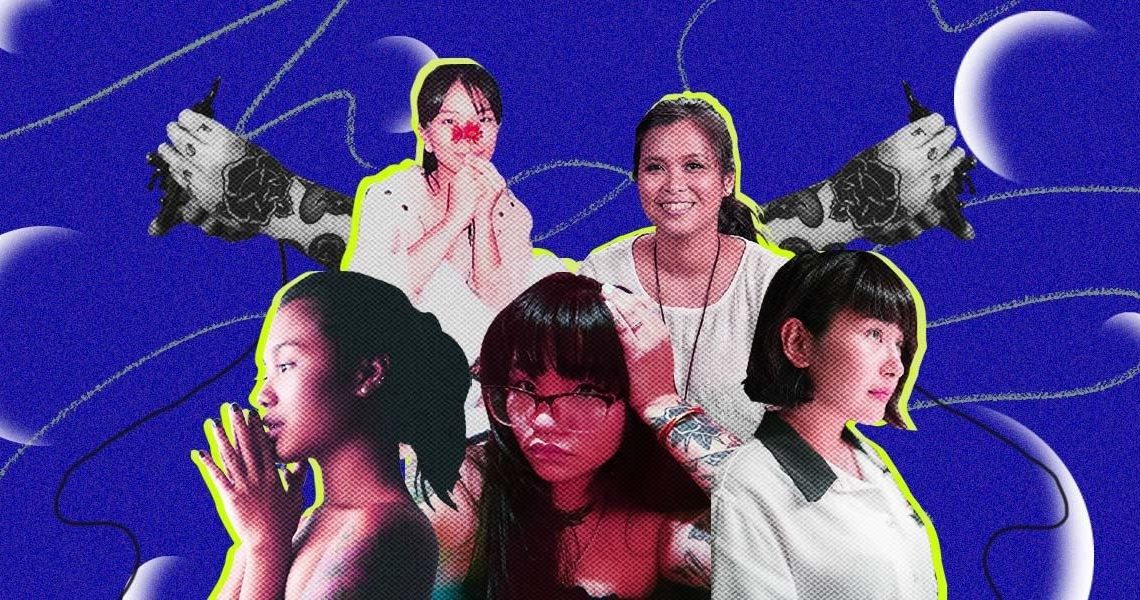 Tattooing has left its taboo status a long, long time ago—and it’s no longer exclusive to a man’s world as everyone once thought, either.

The fact is obvious in the Gen Z kids of Instagram, who wear their hearts on their sleeves through these marks. While the strictest of grandparents may still shun it, this generation has long accepted tattooing for what it is—as art.

The same goes for the artists behind the work. Stereotypes may paint its artist as alpha masculinity personified, but female tattoo artists have now taken the helm, trampling on the clichés just as they should.

Exhibit A of this case: Crimson River Tattoo, a studio in Quezon City run by five female artists.

The origins of Crimson River Tattoo can be traced to its owner Gigie Bear, a fine arts advertising graduate who found her calling as a tattoo artist, thanks to a schoolmate. The rest is history, it seems, as the idea soon grew into a studio where Gigie is able to express her art. Sometime later, fellow artists Wiji, Kara, Annie and Drew joined in. 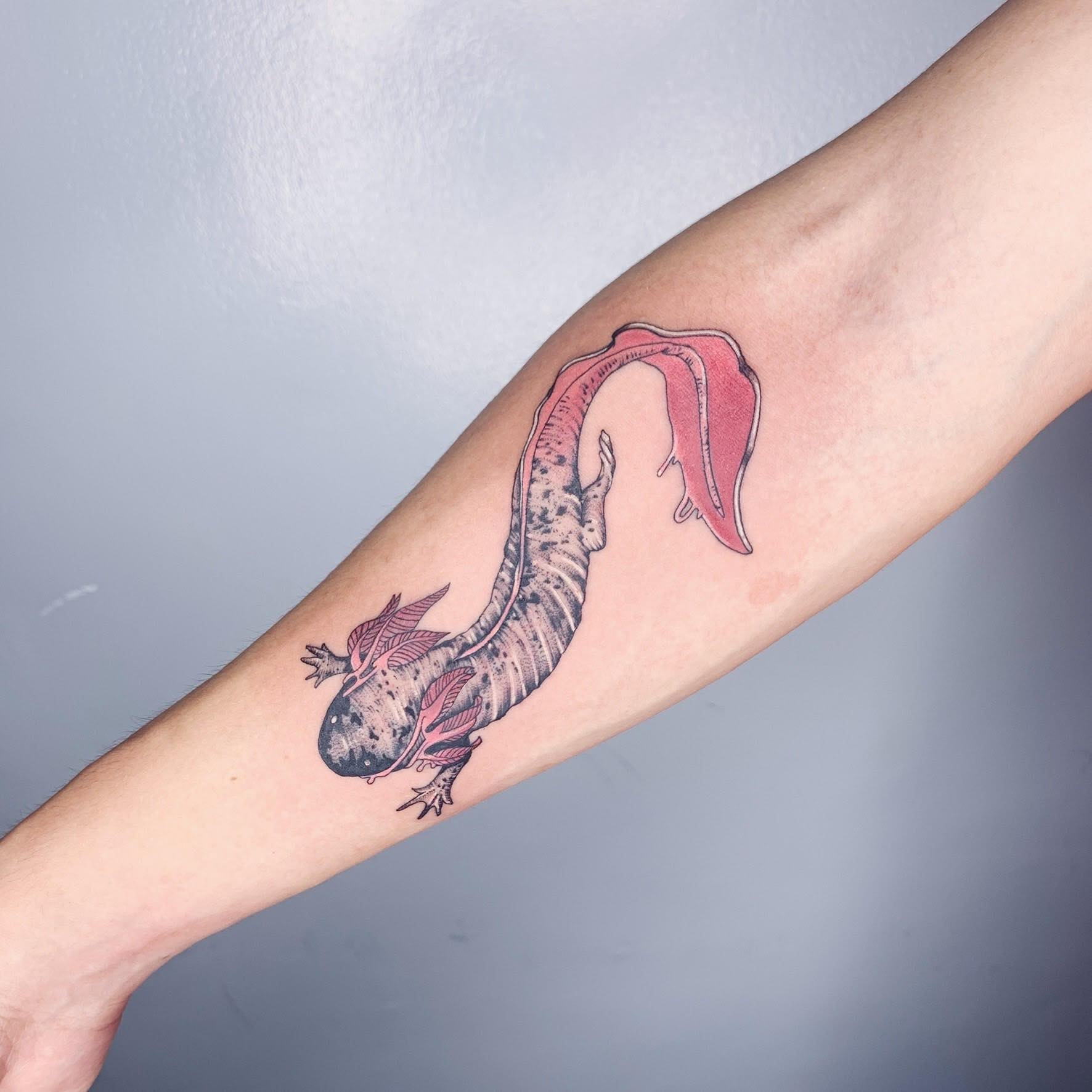 While the team-up may have been fated, it was borne out of a situation when most folks in their industry got hit the most. “When the pandemic happened, a lot of our friends were forced to close down their shops and stop tattooing,” Gigie says. “I just really want to help and support my fellow artists, and for me, it was always a dream to be able to have an all-female tattoo studio.”

It’s a common dream now realized among the five artists who, however, say they’re aware of the stigma attached to the job. At the very least, that perception is changing. “Some people think that women are limited to doing small, cutesy pieces. There are so many female artists out there who do huge work that people thought was done by a guy,” Annie says. “So, yes, it is male-dominated. But a lot of female artists have been getting into the field lately.” 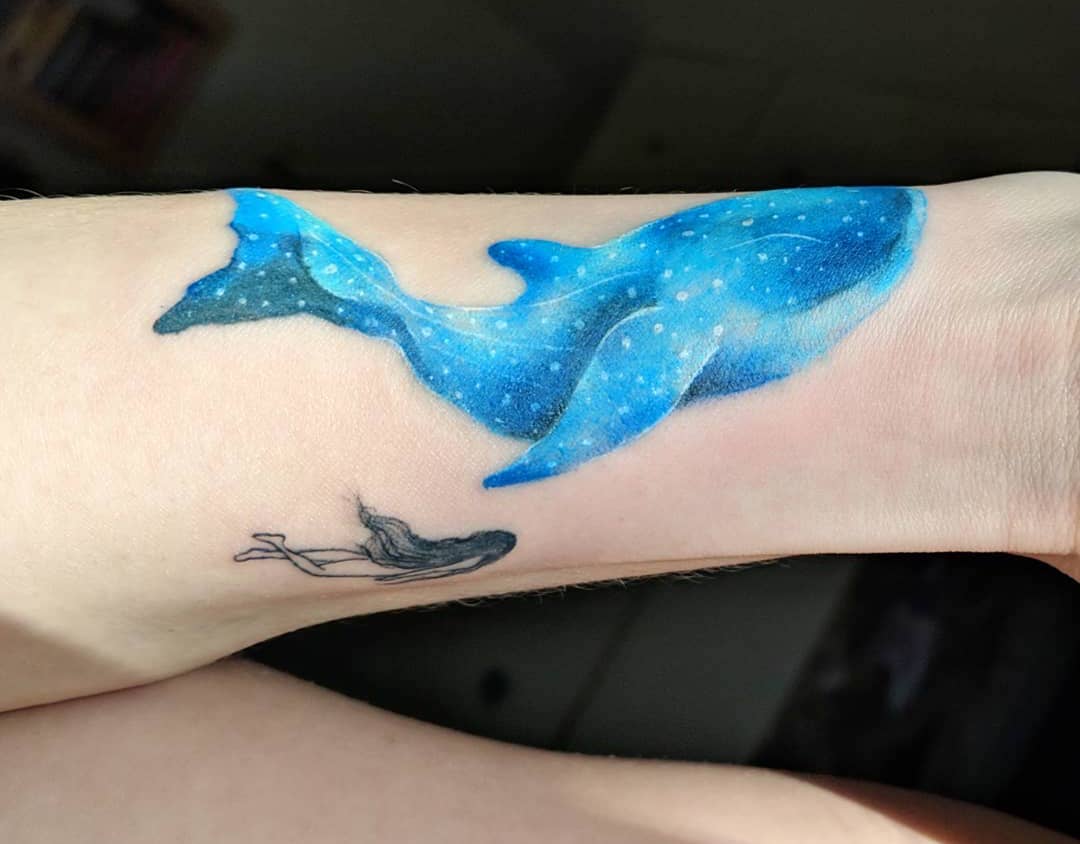 To some, Crimson River Tattoo may only be scratching the surface, but the studio’s existence might well be a huge leap for the profession. “All of us in a circle holding tattoo machines? That is an interesting day at work,” Drew says. “Being surrounded with feminine energy when tattooing is a totally different experience. We express our femininity and evolve our craft with the influence of these powerful women around us.”

We sat down with the artists behind the studio to talk about their origin stories, their most memorable works and their advice—whether to up-and-coming tattooists or first-timers about to get inked.

What are your origin stories as tattoo artists? How did you first get into the art?Gigie: I got my first tattoo from a batchmate. I wanted to try it out for myself, but I was scared, so I never really thought it was for me. I only ever got the courage when me and my partner Cyrus received a tattoo kit from one of our friends.

Wiji: I’ve been collecting tattoos on me since I was 19, and I was always drawing. I never thought of fusing my two interests together until one night, my friend celebrated his birthday at a tattoo shop. He asked all of us to tattoo his back right then and there. I wasn’t able to sleep well that night because I kept replaying the sensation of tattooing someone in slow motion. The next day, I asked Dyun Depasupil—my tattoo artist and the one who helped us tattoo our friend that night—if he would take me in as an apprentice.

Kara: Tattooing was catharsis for me. I started learning from my mentor and friend Katz Lorenzana after I was diagnosed with clinical depression and anxiety back in 2016. Tattooing allowed me to hyperfocus and drown out unnecessary noise. I always say tattooing saved my life because it did.

Annie: My love for art just progressed until college. I studied fine arts at UP Diliman and I was eventually exposed to the art of tattooing there. I asked my artist friends, who helped me pick a starter kit. I just watched YouTube videos and asked lots of questions.

Drew: I tried being a self-taught tattooist but then I felt the need to get proper education. I surrounded myself with great artists, got an apprenticeship at GoodHand Tattoo and there I learned about the fundamentals of tattooing. I’ve been learning for four years now. 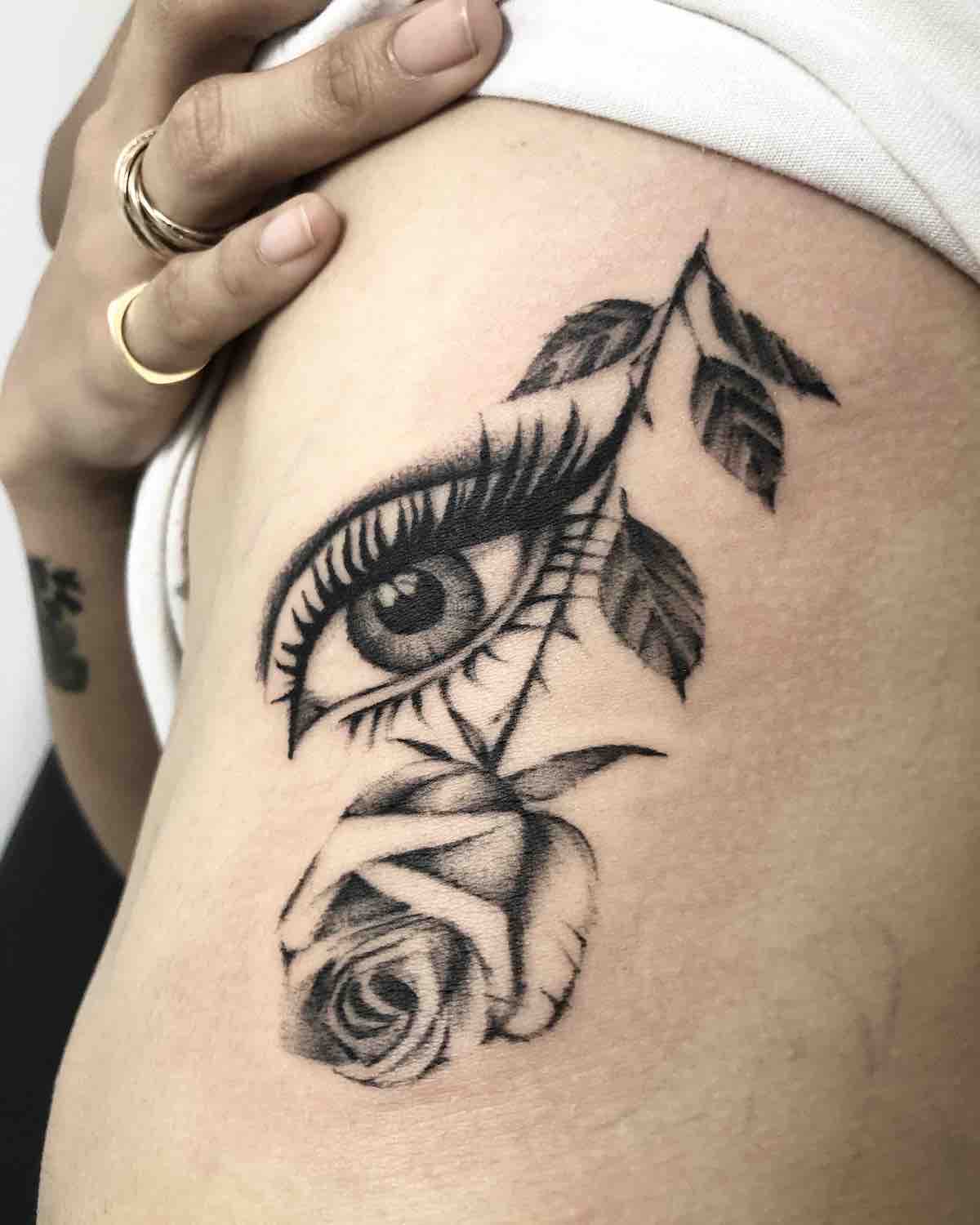 I’d like to think of your lineup as something straight out of the tattoo artists’ version of “Avengers.” How did this team-up come about, and how did you get into Crimson River?
Kara: Gigie was kind enough to welcome us into Crimson River. I had to give up my own studio because of the pandemic, and needed a place to tattoo for the meantime. We were on lowkey talks about starting an all-female tattoo studio in the future, and it actually came true.

Wiji: I’ve always really liked Gigie’s energy and her talent, and we’ve tattooed alongside each other at an event before. When the lockdown began, I decided to close my private studio since it was in my home. Months deep into not tattooing, she asked me to join.

Annie: Gigie was a colleague of mine at 55tinta. She was always offering her help, like offering her studio whenever I needed to tattoo a personal client. I haven’t done much tattooing since the lockdown, and it has always been my dream to build a studio with female artists.

All of us in a circle holding tattoo machines? That is an interesting day at work. Being surrounded with feminine energy when tattooing is a totally different experience.

Some would say that tattoo artistry seems like a male-dominated space, especially if you’re looking at it from an outsider’s point of view. As an all-female lineup, is there a stigma attached to being female tattoo artists? What are some of the struggles you’ve faced?
Gigie: There is definitely still a stigma but it has changed positively. Hopefully, together with the team, we can continue to change that mentality.

Wiji: Times have changed and I’ve been seeing so many talented female tattooers in the Philippine scene. Some of the challenges we face now are the same as our male colleagues, and that’s creating quality tattoos in a safe, hygienic, respectable space.

Annie: Since I started working in a formal tattoo studio, I usually worked around male tattoo artists who’ve helped me learn. But I never really thought that being a woman was a disadvantage. As long as you are capable of creating the tattoo the client wants, then you’re good to go.

Drew: My clients almost always thought I was a man at first, which is no big deal for me. But really, people should just let us do our jobs without the stigma of us being “vulnerable” women. 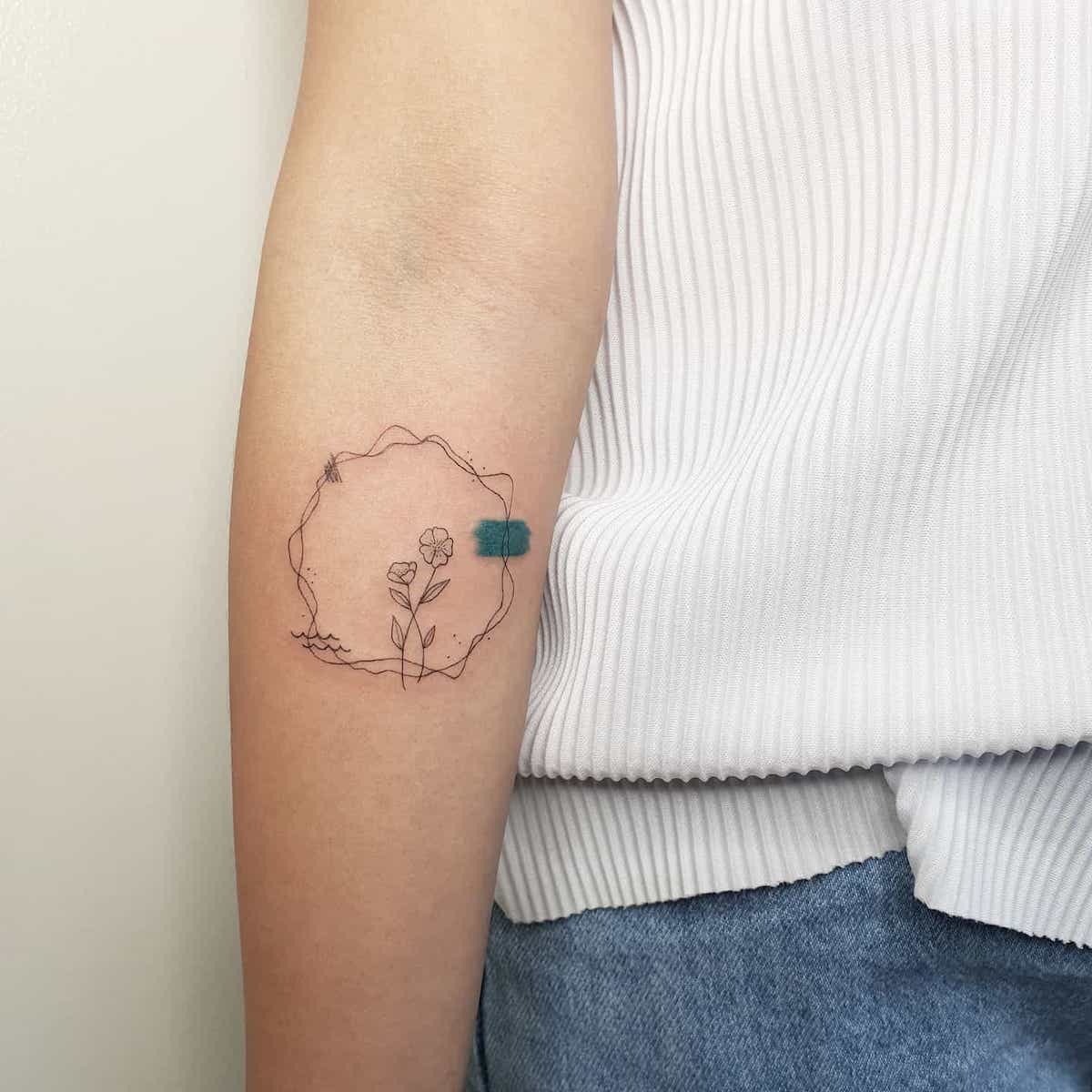 Kara: Each piece I’ve done is memorable in its own way, but if I had to choose, it would be the first one I ever did—blood, sweat and nervous tears included.

Annie: I once did a tattoo for a couple who headed straight to the studio after they got married. She was still in her wedding dress. I’ve also done an excerpt of this beautiful love letter of the client’s father to her mom.

Drew: The ones that stuck in my mind were the tattoos that I really enjoyed doing. Being proud about my work on someone’s skin sends off the energy on how I connect with the client. 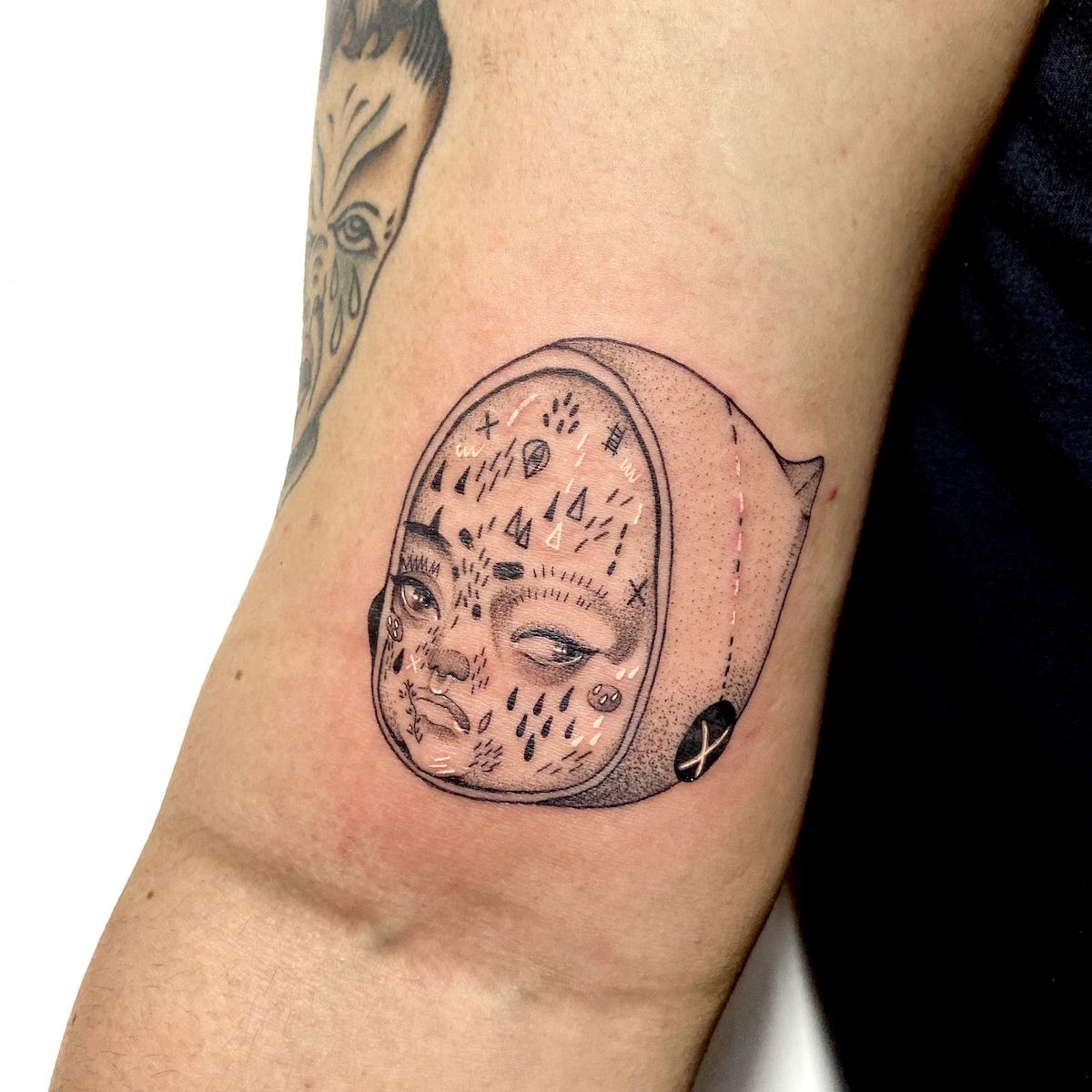 What is something aspiring tattoo artists should consider before they jump into the field professionally? Any go-to advice?
Kara: You have to be willing to invest your time, effort and resources if you really want to learn it. You need to invest in yourself, in good equipment and all the necessary tools to make sure your clients get a sanitary and safe experience.

Tattooing is also a lot more than just inking someone with your art—it’s a shared experience between you and your client that involves trust, so you have to be mentally and emotionally ready for that.

Gigie: Getting a proper apprenticeship is the best way to do it. It’s also important to know the style you want to do so you can pick a mentor that’s best suited for you.

Wiji: Try to find someone who will train you well on good ethics and hygiene.

Drew: Learn to fall in love with tattooing first—not just with the actual tattoo, but the hows and whys of it. Being deeply interested in it will help you pursue the craft and keep you inspired.

Some people think that women are limited to doing small, cutesy pieces. There are so many female artists out there who do huge work that people thought was done by a guy.

Finally, any tips for first-timers who are excited—but maybe a bit scared—to finally get inked?
Kara: Ninety-five percent of my first-timer clients say it’s not as bad as they thought. But getting tattooed is a completely personal experience, so it really is different for everyone.

Gigie: Research and pick an artist who best suits the style of tattoo you want to get and listen to their advice. You’ll be fine.

Annie: Listen to your artist. Know where to place it and yes, it could be a bit painful depending on your pain threshold. Follow the procedures before getting a tattoo—no alcohol, sufficient sleep and eat before your session.

Wiji: The hardest part for first-timers is committing to a design. This part could take years, but that’s alright. Don’t rush into it. Once you find a design you are absolutely in love with, find an artist whose style and energy suit yours. Please be kind and respectful, too. I find that I get better tattoos myself when I have a good relationship with my tattoo artist.

Drew: We all want to be comfortable in our own bodies, and if getting a tattoo can help you with that, then do it. Live in your own skin. Getting tattooed should only be about you, on you and for you.

What tattoo artists told me before getting my first tattoo
For Kristian Kabuay, Baybayin isn’t a trend—it’s a way to preserve culture
The do’s and don’ts of Baybayin, according to this artist

SHAREBy Ken Coseto I feel like a kid stuck in the limbo of...