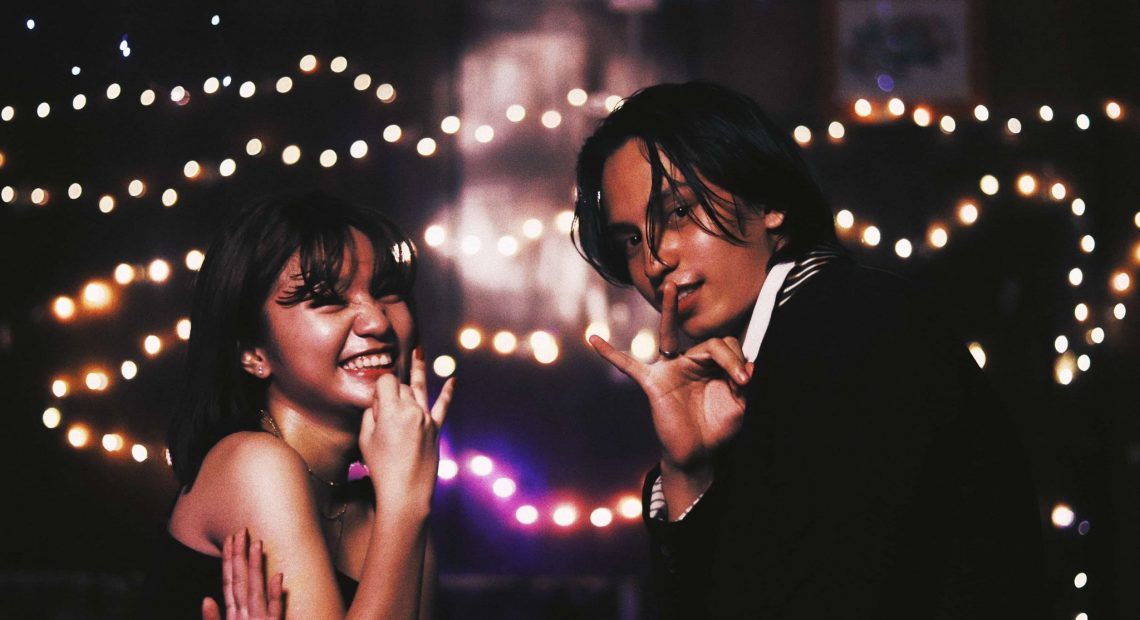 Loved ‘TEOTFW’? PH series ‘Basta Gagradweyt Tayo’ is for you

Note: This was written before the drop of the series finale.

Pre-graduation bad luck lingers even more, doesn’t it? This is what we’ve always been made to believe. Everything is a warning sign, from that beach trip our friends had planned in the last summer of high school to that quick bike ride to the outskirts of town. Days close to  graduation are more prone to accidents, we’re told, making us feel like the ceremony is a fight for our life.

In the  local online miniseries “Basta Gagradweyt Tayo,” neither do the two high school students tag along a faraway, risky trip nor do something typical Filipino parents would disapprove of. Actually, they do what’s expected of students: finish their class requirements. That’s when  their cautionary tale unfolds, though. 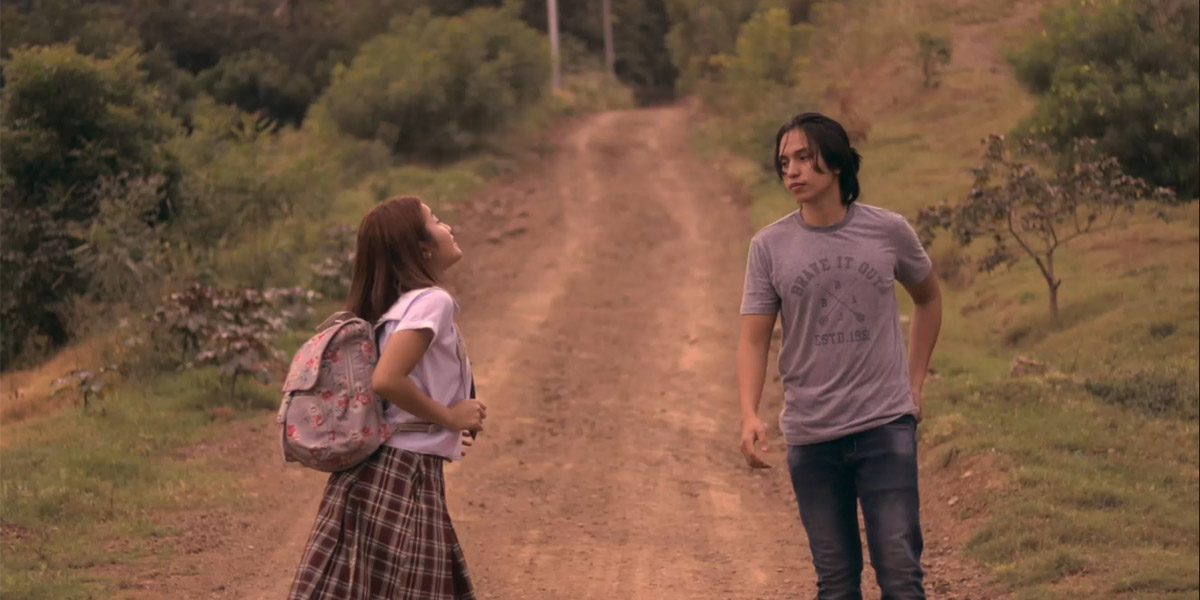 In hopes of growing close to him, Airah comes to the rescue upon realizing that Raffy hasn’t been keeping up with pre-graduation requirements. “Kids Helping Kids,” the trailer says. However, the story takes a disturbing turn that would make you reevaluate everyone involved. Who’s the real villain? Are we seeing the truth?

'Basta Gagradweyt Tayo' is a pinoy-made coming-of-age miniseries. It talks about two students teaming up to fulfill…

Not only is this series peppered with “The End of the F*cking World” vibes and pleasing aesthetics—it also ambitiously explores how desperation, pressure, angst, innocence and a young person’s motivations can make for a volatile mix.

The idea was borne out of Leighton’s personal frustrations—towards online classes, that is. “I had some issues with how complicated virtual classes are and also with the system that doesn’t know how to compromise with the situation we are in now. So I thought using film to express thoughts and lowkey address issues would be better  than just ranting on my Twitter account,” said the biology freshman at San Pedro College in Davao. Other inspos include K-dramas “Reply 1988” and “My Mister.” 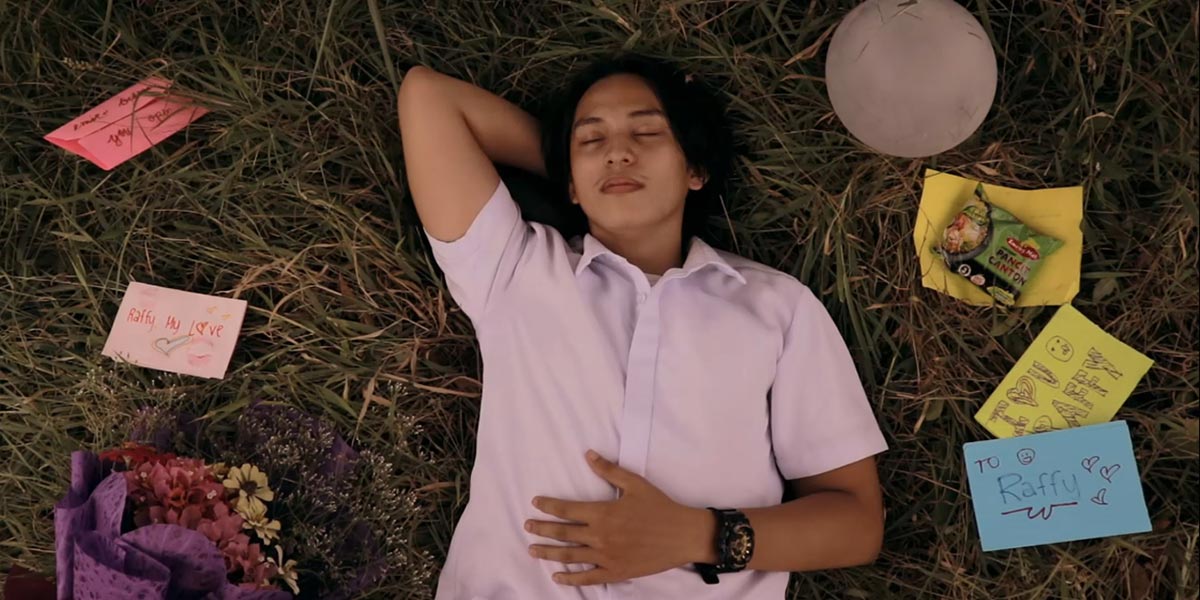 Add up the hella bomb soundtrack that injects an eerie, free-spirited energy—just ask local musicians Luke April and KREY—and you’ve got a definitive product of its time. “Luke April is definitely a music genius. He’s my friend. He’s cool, he’s talented, and he’s insanely creative,” Leighton says. “They make music together with his girlfriend, KREY, who also has an amazing voice btw. Everybody is talking about their song ‘Prism’ and I believe they deserve to be recognized more as artists.” And OFC, who could skip Miki Matsubara’s “Stay With Me?”

Here, we talk to Leighton on quarantine shooting, picking his characters, and having an internet favorite series.

How long have you been making films? When I dropped by your channel LA Films, I saw that you’ve been posting a couple of shorts and series for more than a year now. Were they originally school requirements or completely passion projects?

When I got into high school, I was fortunately enrolled in a special program for the arts specializing in multimedia, so I was immersed in amateur film production at an early age. I began volunteering to direct short film projects in my class and accept commissions from other people as sideline work. Then came college where I got to produce these shorts and series because I just felt the need to tell a story as well as express myself through art.

What made you decide on pursuing a dark direction for this coming-of-age series?

I personally wanted to get out of my comfort zone so pushing with a theme that I’m definitely not familiar with is such a huge challenge for me. However, I think that the decision of trying and giving it a shot as  a different genre would go well and give more impact to the message that I’m trying to bring. 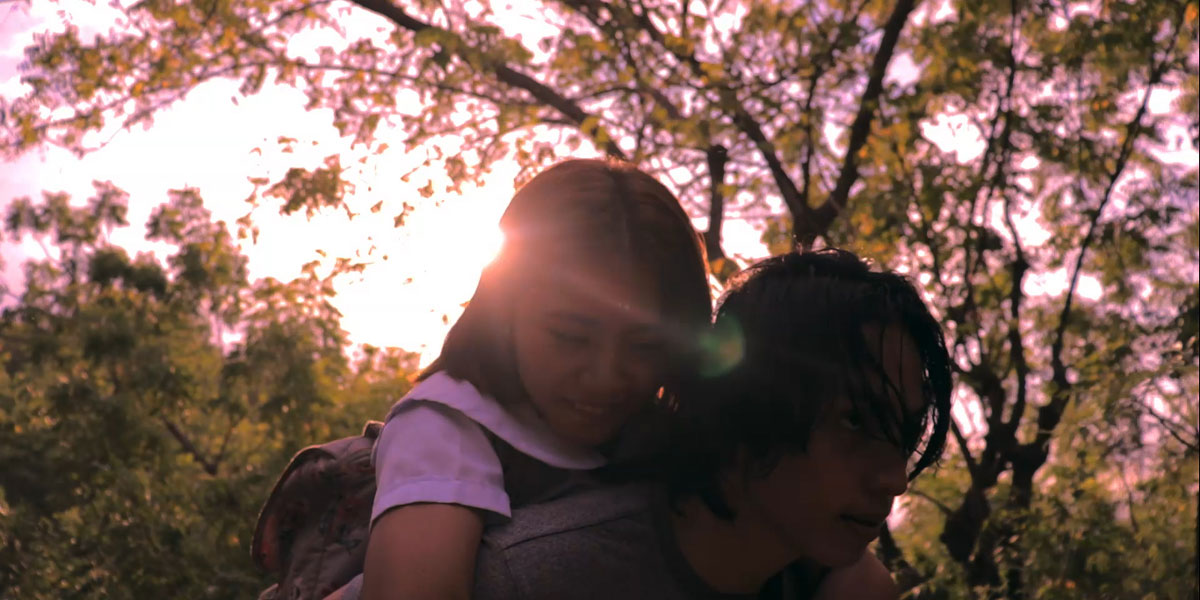 Can you tell us more about your team?

While I handled most work (from the screenplay, editing, cinematography, directing, and sometimes the driving, lol), I still couldn’t make this project possible if it weren’t for friends who  helped me. I got Esau [Villamor], Endria [Silva], and Arshel to be the insanely talented lead characters; Eduardo and Carolyn as the nonchalant extras; Ryan and Donetha as the extremely helpful production assistants. They are good friends and I believe that they contributed in making this project successful even if they have  little to no experience in actual film production. 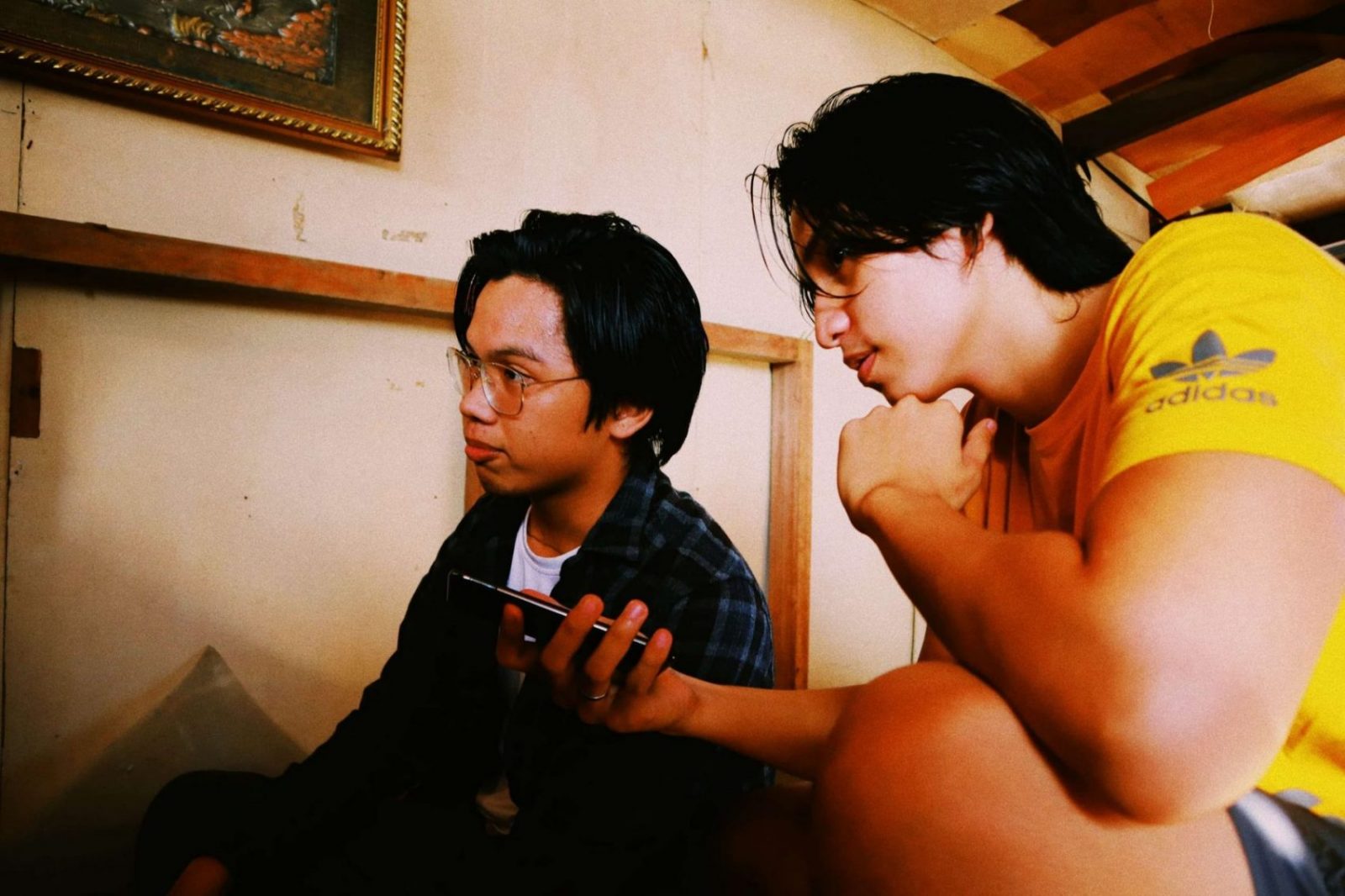 How difficult was it to shoot “Basta Gagradweyt Tayo” considering that you worked on it during quarantine? And why work on it now instead of waiting for a more convenient time post-pandemic?

It was really hard, to be honest. Everyone in the team lives in different towns so the first thing we had to deal with was traveling. Esau (who plays Raffy) lives the farthest so he travels an hour and a half every shoot to get to our location. Aside from that, there are strict quarantine protocols we have to follow for (contact) tracing and safety purposes. So if we think about it, it is really inconvenient to produce a film these days. But waiting for a more practical time would be like waiting in vain. Waiting is hard when nothing is guaranteed.

What were your favorite moments while making the film? Anything you discovered about your teammates or yourself?

Breaks and meals will always be my favorite moments in the set. We get to bond with each other and get to talk about a lot of things. By the way, everybody in the team is still a student. We actually took our final examinations in our shooting locations and we sometimes do schoolwork together. I also had the busiest weeks during that time because I had to juggle directing the production shoot, my sideline work, and my academic requirements. So it is quite a discovery that  I am capable of simultaneously finishing all those despite the hectic schedule. 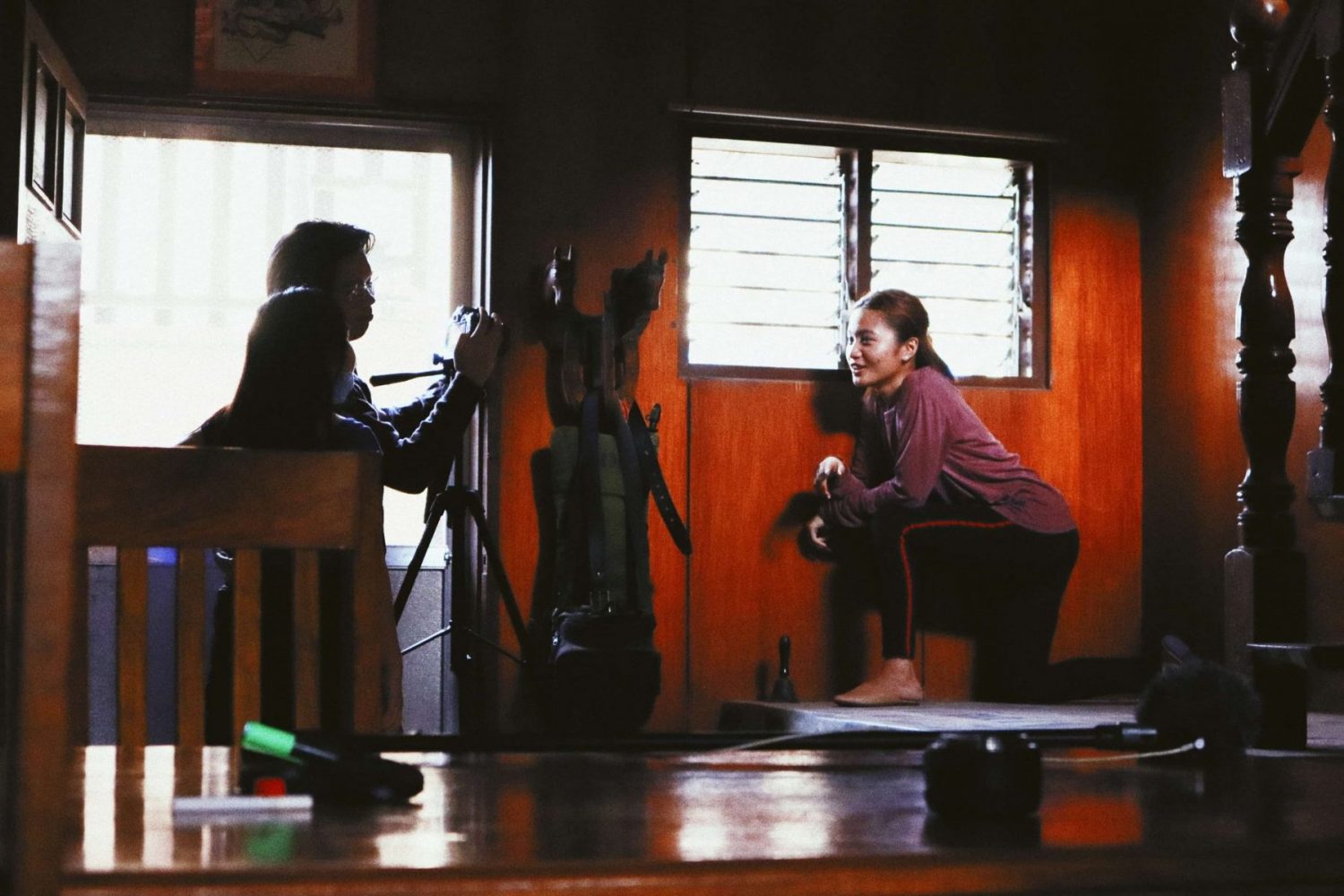 The series follows two students Airah and Raffy teaming up to fulfill pre-graduation requirements, but later in the story, we find out that one of the characters apparently does a completely unimaginable thing to their teacher. There’s no clear black and white in the story so far, but did you worry that this event would make your viewers perceive the show’s message differently? Or were you confident that the audience would eventually hate the character (or the character’s actions, at least)?

I kinda expected that people would hate the character after that ‘thing’ was revealed. Originally the character was designed to be complex so the challenge was how to  establish a strong connection between  the character and the audience. I’ve heard debates about this online and I think it’s up to the (viewers’)  own interpretation how they would react to the character’s deeds.

Why did you choose Airah and Raffy to lead the series?

For a coming-of-age set in school, I believe Airah and Raffy both have stories to tell as students. They are capable of voicing certain issues just as every one of us should. We have the power to address and create change. So I tried to embody the students through Airah’s and Raffy’s characters but at the same time, make them relatable and realistic kids. 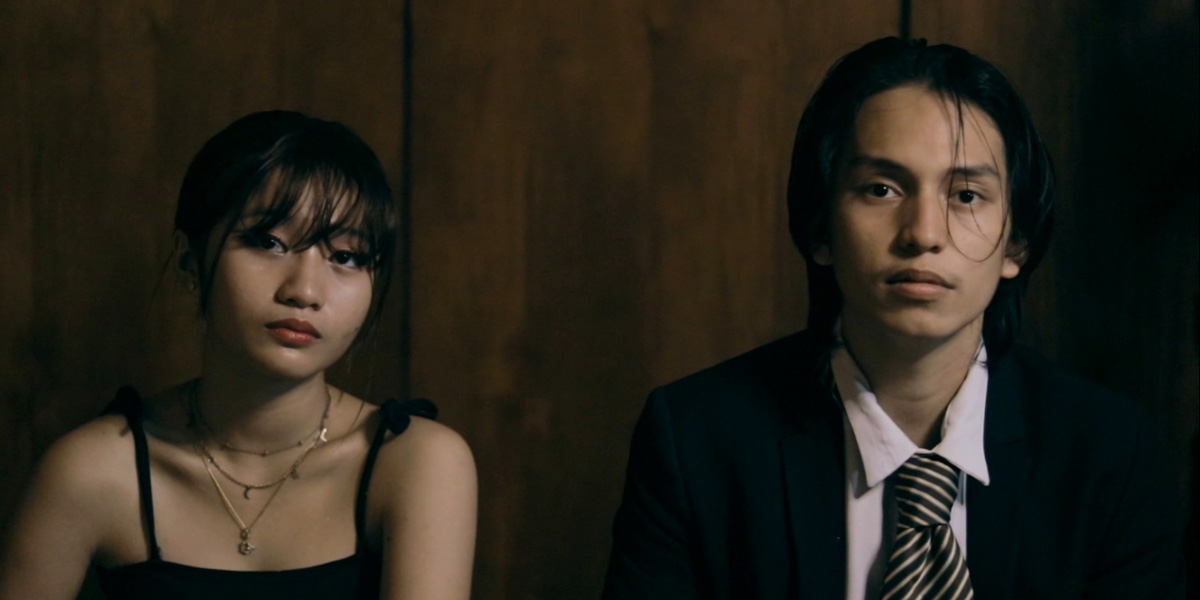 What’s your favorite feedback on the series so far?

Every feedback matters to me! It’s so overwhelming that they find the series (to have) a whole new atmosphere and vibes than usual. But I will never forget that one hilarious comment that says, “Itong miniseries na ‘to, ang sarap ipagdamot pero deserve ipagmalaki!” Because TBH, that made my heart melt.

(I want to keep this miniseries to myself, but it also feels good to tell everyone about it.)

The series finale is on its way. Do you have any parting message for your viewers?

I still can’t put into words how grateful I am to everyone who contributed to this project! Thank you so much for putting up with me and helping me make this story I just once had in mind come to life. Also to those who watched and appreciated the series, thank you so much for supporting our craft! We will definitely work hard to produce more quality shows soon. I hope you stick with us till the final episode. We still have a lot in store for you so don’t miss out!

Watch the pilot episode here and check out more of L.A. Films here.

SHAREAfter irresponsibly making a short film about child rape accusations, it looks like...

Rihanna’s self-care routine is working on “R9” (for real, this time)

SHAREBad gal Rih has really been holding out on us. No one can...