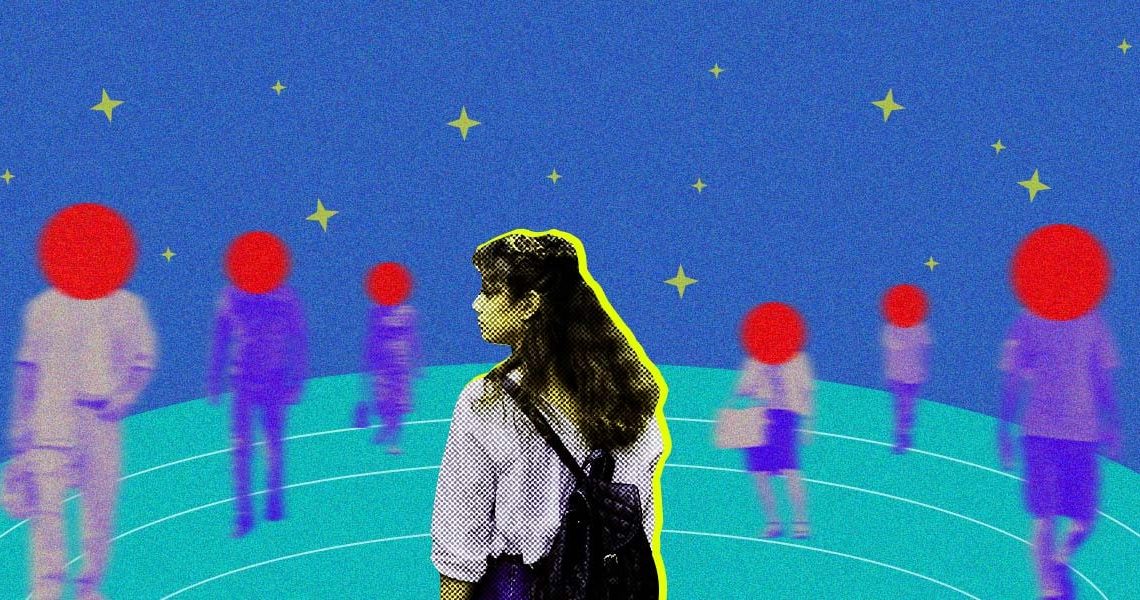 Announcement: Loneliness has taken over the universe. The big task is to find someone who completes you. Everyone else is irrelevant. Good luck, and happy hunting!

Getting lost while nursing a pummeled heart? Not a good combination. I worried about arriving late in Makati to apply for an internship I didn’t need. I immediately shelved the rehearsed interview answers in my head, and rummaged through my memory for the directions I was given 15 minutes ago: Should I head left or right?

“Hey, you’re lost too?” a girl in mom jeans and a black vest approached me, just when I finally found the glass door I was looking for. She reminded me of people who wouldn’t sit with me at parties: loquacious, candid and bursting with personality. But that time, we had one similarity—our hair’s all sweaty from all the running. I knew she was my age when she started to complain about the things I would—one was the interviewer who overslept and ghosted us.

We ended up eating late lunch at the nearby convenience store, talking about how different our universities are. When I got home, I downloaded Fight List, a game she kept recommending for scatterbrain hours. I probably told her everything I could within an hour, but I wish she knew that game would distract me from further dwelling into heartbreak.

Heartbreak is prominent when you’re in a government office. Or maybe more of frustration? There are long lines that could’ve been shorter, complicated instructions that could’ve been simpler, and employees who deserve better. Well, that’s one of the reasons I was in a COMELEC (Commission on Elections) office in the first place, ready to get that right to vote.

Before having my photo taken, I squished myself between sleepy and screaming strangers, some of them I indirectly met because I kept hearing their names. When I was just about to fish out my phone, a woman approached me: mid-40s with a toddler in her right arm, and a Good Morning towel on another. “Sorry ate, pwede po bang manghiram ng ballpen? Nawala kasi ’yung akin.”

(Sorry miss, can I borrow your ballpen? I lost mine.)

I didn’t know her, nor have I heard her name in our neighborhood. But I thought, we wanted one thing: change. I handed my pen and said she could have it. Even after the photo-taking, she kept thanking me, her child now clinging tighter to her arms. I thought of every huge thing I wanted to be acknowledged for in life—but I felt shy being recognized for the bare minimum.

The bare minimum wasn’t the right word for this press con lunch. Scanning the room, I learned three things: It was my first time eating enchiladas; also my first foreign film festival in months, and I was the only Gen Z in the room. So, it was hard to find a familiar face—even harder to pick a table.

Before I could even choose, a woman in a ruffled blouse and denim jeans invited me to theirs. Scanning their conversation while munching on my enchiladas, I learned three things: she’s a writer, the guy next to her was a photographer, the other guy’s working at the Mexican embassy.

I’d often joke that boomers love me, though the truth is I try to avoid having conversations with them. But that lunch made me realize three things: how they want government accountability as much as I do;  how some of them actually believe in young people’s ideas, and the stereotypes attached to Mexicans. The woman reserved me a seat upon entering the cinema, because I had to go to the bathroom.

Bathrooms in the University of the Philippines Diliman aren’t exactly a good place to stay in, especially when I almost met a ghost there. Just two hours, I told myself. Just two hours of travel and I’ll finally know what’s going on with my stomach. I swiftly booked a carpool, hopped in, and scrolled through my photos from today’s workshop with Sir Ricky Lee.

Surprisingly, we took a swerve, welcoming a guy in a blue polo from the same building. He took the shotgun. Ten minutes of silence was enough for the driver to ask, “Galing kayo sa iisang workshop, ‘di ba?”

(You came from the same workshop, right?)

Suddenly, the first hour of my trip home morphed into a conversation on  delayed projects and aspirations. I learned he wanted to continue writing his fantasy novel; he discovered I wanted to pursue screenwriting. The guy was the first one to leave the car. Ten minutes of silence was enough for the driver to say, “I respect writers a lot, ma’am.” When you’re drowned in statistics and cancel culture, it’s easy to forget these people exist.

“These people exist,” I thought, looking at my dashboard. Summer before senior year of high school, I lost sleep over Tumblr, a lair of kids I wanted to be classmates with IRL. One of them was a Filipino boy my age living in the United States. He was kind, funny and creative—enough for me to trust him with my book recommendations.

We collaborated on little projects for our blogs and shared random stories, all while trying to meet halfway despite the  time difference. We got disconnected during college but unexpectedly reconnected after my graduation. Early this year, he shared that he told his friend about our interesting internet story. “It’s just surreal what can happen online. You meet strangers you wish you knew more personally,” he said.

Before sunrise, sometime in 2021

Unlike Jesse and Celine in “Before Sunrise,” I can never love—much more fall in love with— people I barely know. But maybe I’ll always be infatuated with how they show up.

Strangers are living ghosts. You meet them unintentionally and don’t know anything about them. Even if you knew their name, how would you know it’s true?

I’ve found myself in failed relationships that indirectly tell me I’m too much, or unlikeable, or eventually boring. However, these fleeting moments tell me otherwise.

We’re hardwired to accomplish the grueling task of finding The One, our perfect puzzle piece. What if it died before us, would live past us, got lost on its way, or doesn’t exist at all? In this process, we forget how strangers can contribute to our completion, even just for a day. I love these stories because they have no conflict. I love these stories because I don’t have to risk much of myself.

This is an ode to stories, the 0nly way I’ve understood love

SHAREWhen days feel robotic, the desire to find a secret portal inside our...