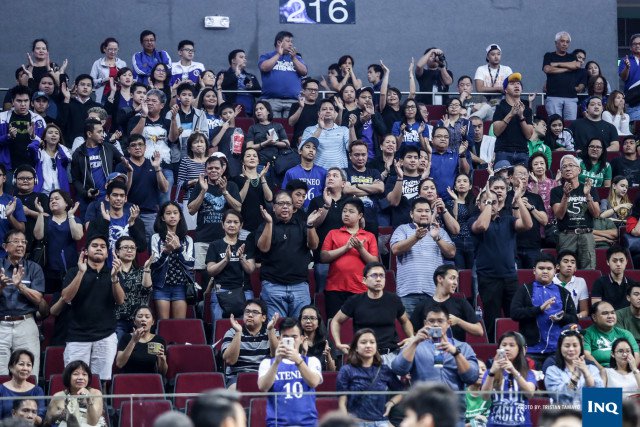 Yesterday’s La Salle-Ateneo game was, without a doubt, the most controversial game of the rivalry in recent memory—but this time, it wasn’t because of how either of the teams played on the court. The heads of both Ateneo and La Salle urged their fans to wear black shirts to protest all the human rights violations (by way of extrajudicial killings) that have been happening lately.

The controversy, of course, lay in this act of protest, with those disagreeing claiming that sports and politics shouldn’t mix. The Blue Eagles came out in black shirts, while the Green Archers did not. Although their refusal to go along with it isn’t an indictment on their own political beliefs, a lot of other fans didn’t really care for the movement, mostly because they believed sports should just be about sports.

On the contrary, sports is one of the best avenues for politics, and it has always been due to its far-reaching influence over society. When a boxing match can bring people together and eliminate the crime rate for a day—and, subsequently, get an athlete elected to office—you know it’s powerful. (Check out the gallery above for a handful of examples where sports became a canvas for activism.)

Sports simply does not exist in a vacuum outside the society it’s in. Historical segregation in the last century made that clear before, and former Los Angeles Clippers owner Donald Sterling’s racial controversies made that clear a couple of years back. If these forces can directly impact the way the game is played, then why can’t its players speak out?

It’s not exactly the same situation with race here, but athletes are human beings, too, and some of them are intelligent and woke enough to have beliefs they can speak out on. NFL player Duane Brown said it best in a recent interview with Sports Illustrated: “Many people think we should just ‘stick to sports.’ They think that we exist solely to entertain them; that we have no right to express ourselves when it comes to issues that matter off the field.” He, and athletes like Colin Kaepernick, who’s still under fire for protesting the American national anthem, understand the real power of their influence as athletes, and understand that the best time to take action is when the whole world is watching on primetime. The most intelligent sportsmen, like Muhammad Ali, have always known that they had it in them to be statesmen.

And Brown really nails the elephant in the room here with the second part of his comment, explaining the reluctance of sports fans with speaking out. At least, for those who really don’t care about anything going on and would rather get lost in the escapism instead of dealing with the truth. (And that’s the best-case scenario.) “Typically, these are the same people who, at best, don’t see anything wrong with our society,” he continues. “I can’t worry about them. They aren’t ready to hear me or hear Colin [Kaepernick] or hear the countless citizens that care about the future of our country.”

He was talking about the States, but with the Philippines and the U.S. looking a lot more like each other by the day, he could have very well been talking about us.