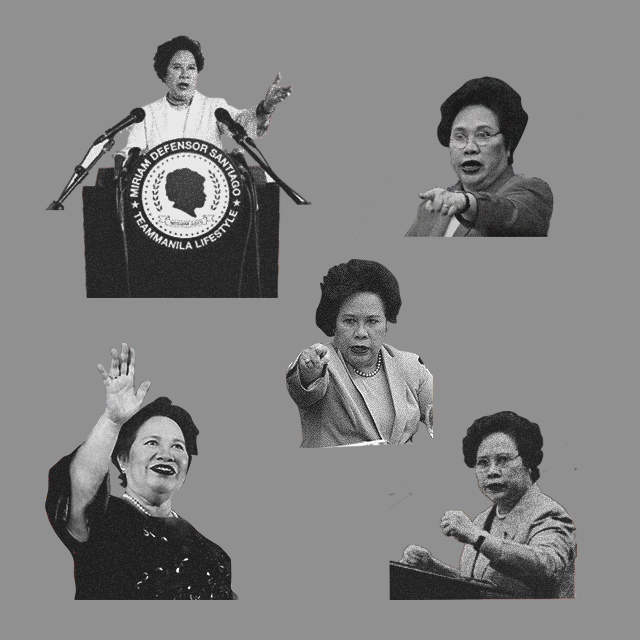 Shortly after she announced that she would join this year’s presidential race, Miriam Defensor-Santiago pushed herself beyond human limits. For us who have seen her struggle with advanced lung cancer, it was as if she were suddenly healed. We threw out the pro forma replies we have drafted for invitations to speaking engagements. We started filling out a busy calendar of activities again. We relearned the habit of catching the 5 o’clock briefcase that made the trip to her home from our office. Everyone’s favorite guest speaker was back in business.

But as is the case for cancer patients, her optimism got the better of her. “I am dead,” she once announced as soon as we had entered a hotel lift, escaping the selfie-hungry crowd. “No, I am past dead.” Her voice, which broke her staff’s self-imposed silence, was also broken by her heavy breathing. She nonetheless found time—and enough breath—to tease me, asking, “What do you call someone who is past dead?” The wittiest I could muster was, “Post-dead? Posthumous? Double dead?” She laughed heartily, if briefly, and fell silent once more. We followed her lead.

When Miriam irreversibly fell silent on September 29, tributes poured in on social media, on the airwaves and even from all corners of the political arena. She was, after all, a woman whose public life spanned some three decades. She was a celebrated judge, an immigration commissioner, a Cabinet official, a three-term senator, and a three-time presidential aspirant. With praise, however, came criticism, and understandably so. It is difficult to name a figure more polarizing than Miriam who is as deeply embedded in the national consciousness.

She herself acknowledged—and seemed amused by—the public’s dichotomous assessment of her, when she said, “Those who like me, raise your hand; those who don’t, raise your standard.” I venture that the reason one can only either love Miriam or hate her is that she never sat on the fence. Her position on all issues have always been as clear as the voice she used to articulate them. That’s not to say, however, that she has been consistent. Why should she be? As she once borrowed from a poet, “a foolish consistency is the hobgoblin of little minds.”

The recollection of Miriam, however, is not as conflicting among those who, like me, knew her sans her microphone, without the podium and beyond the frame of a television screen. When I heard the cracking voice of a colleague who confirmed Miriam’s demise, I did not remember the bills she filed, the way she voted during impeachment trials or the running mate she chose in what proved to be her final electoral contest. What came to mind were the moments we shared in Monday staff meetings, small holding rooms or cramped elevators.

[pull_quote]When I heard the cracking voice of a colleague who confirmed Miriam’s demise, I did not remember the bills she filed, the way she voted during impeachment trials or the running mate she chose in what proved to be her final electoral contest. What came to mind were the moments we shared in Monday staff meetings, small holding rooms or cramped elevators.[/pull_quote]

I remembered how, on the first meeting I attended as a member of her staff, she decreed that I would be known in the office as Arveen, my second name, instead of Kim, my first name. “It’s confusing,” she said. “Is it male or female?” Months later, she called the office, annoyed, because a media executive who spoke with her had been talking about Kim and not Arveen. “Who is Kim?” she hollered. When reminded about how she rebaptized me, she said, “Ah, yes. I was standing on top of a mountain and I stretched out my arm, and said, ‘I shall call thee Arveen.’”

I remembered how she told me off on our first phone conversation for saying “Okay, ma’am.” “Say ‘Yes, ma’am,’ ‘Opo, ma’am,’ but never ‘Okay, ma’am.’ That is impolite. Okay?” she said. It would have sounded too autocratic for my sensibilities, but Miriam walked her talk. Letters that she sent unfailingly reflected the respect she held for the office of the recipient. She usually opened with “This is to respectfully request (or inform, etc.) …” Members of her staff have adopted this format, and will likely remember Miriam every time they write letters.

I remembered how she hesitated at first to hold me by the arm in public, insisting that she should be assisted, if necessary, by the most senior female staff member accompanying her. “Papaano kung matumba ako at kay Arveen ako nasubsob? Hindi maganda kung makuhanan ng camera,” she said during a staff meeting. But I also remembered how she eventually warmed up to me. By the time we toured cities for the campaign, it became typical of her to say, “Walk beside me, Arveen,” while holding my arm and whispering instructions, questions or reprimands.

I remembered the times that I walked with her out of the Senate session hall and into her car at the parking lot. She smiled at gawking employees or stunned Senate guests and sometimes even asked the elevator operators about their day. (They smiled in reply, their tongue numbed in Miriam’s midst.) One of our more memorable trips to the parking lot was the one that we shared after her Senate win against defense agreements with the U.S. While waiting for her vehicle, Miriam saw a license plate marked RVN. “Look,” she told me. “There goes your car: Ar-Veen.”

I remembered how, a day after my grandmother died, I reported for work because I had scheduled for Miriam a morning news show interview. As soon as she stepped out of her car, she patted me on the arm and said, “I am sorry for your loss.” The simple gesture spoke volumes about how Miriam valued the people she worked with. To me, her expression of sympathy that day meant that she knew how difficult it must have been for me to be away from home. It also came across as her way of telling me that we were almost at the finish line of the presidential race.

I remembered finally the phone call she made at an unusually late hour the day that I handed in my resignation. She began by asking whether I would be at her home for a television interview I had booked for her the next day, but interrupted herself to say, “Before anything else, congratulations on your scholarship—and of course I will approve your resignation.” Tears rolled down my cheeks as I thanked her for her kindness. “So will I see you tomorrow?” she asked. I answered in the affirmative. “Thank you,” she said as she hung up. She never said goodbye.

The interview for the morning after that phone call was one of the last ones Miriam taped. When asked about how she wanted to be remembered, she said, “I want to be remembered only in the memories of my own family.” Whether she likes it or not, Miriam will be remembered collectively by a nation whose course she helped change, for better or for worse.

And if she were to ask me again what the word is for one who is past dead, I have a better answer: In your context, ma’am, to be past dead means to be untroubled, transcendent, immortal.

The author formerly worked as a public affairs and media relations officer on Senator Defensor-Santiago’s staff.

SHAREFeminism! Queer art! Great music! What more can you ask for? It’s time...

Your button-downs are getting a makeover montage