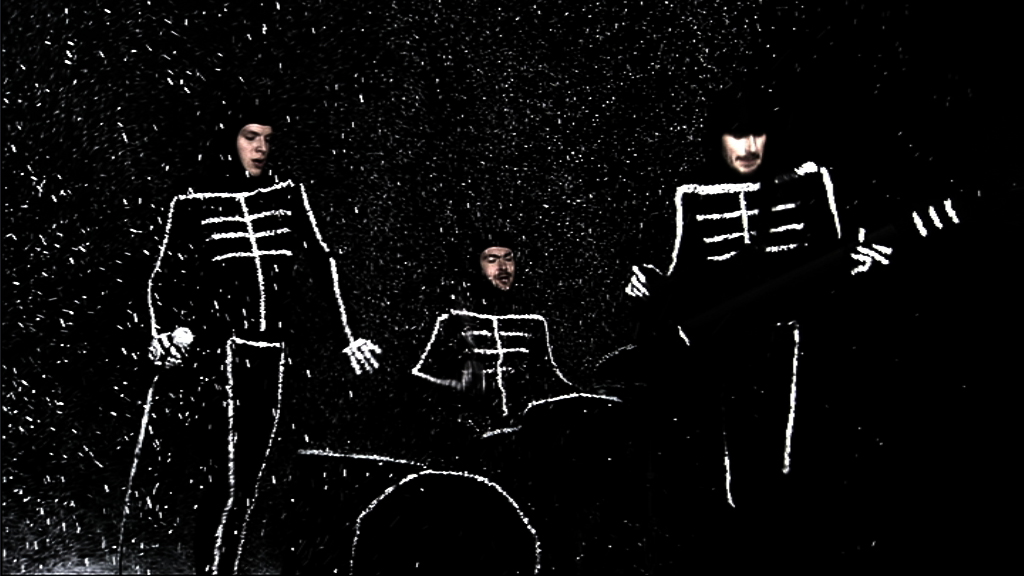 Halloween might be the best thing in life thanks to its awesome parties and tons of free treats and candy. And speaking of sweets–ear candy is just as good as nailing that low-budget costume that’d make everyone go ‘why didn’t I think of that?’

Ultimately, the key to any Halloween party is the playlist. But we don’t want you forever looping “Thriller” by the late great MJ or “This Is Halloween” straight out of a children’s horror film anthem. Take note, ladies and gents—with a few zombies, ghosts, and a psychotic Hagrid (we’ll get to this later), we’re pretty sure we’ll complete your best Halloweekend yet.

Friendly Fires – “Skeleton Boy”
Despite the floating heads and cheap costume realness, Friendly Fires made sure looking dead can be the next cool. With a whirlpool of confetti and giddy vibes to match, dancing in the dark is now at the top of our Halloween to-do list.

MGMT – “Kids”
Remember that time when you were a kid, hoping and praying that there were no monsters under your bed? Or that time when shadows looked creepy af and you just couldn’t help but run to your mom? Being a kid is actually damn scary but at least MGMT gave us great ideas on our next Halloween mask purchase.

Toro y Moi – “How I Know”
Who knew getting electrocuted in a haunted house while eating spaghetti can look like a fun experience? Imagine a grown up girl version of Casper the Friendly Ghost plus a spooky dance party with all your OGs. Even when it comes to the psychedelic afterlife and getting your head sliced off by a vinyl record, Toro y Moi sure knows how to bring life to a (literally dead) party.

Blink 182 – “I Miss You”
Let’s get even spookier as Blink 182 serenades the angel from his nightmare. The video shows how not being with the person you love can be a horror in itself. Though we don’t want you to sulk it out this month, you can surely spot some costume ideas for your house party.

Yeah Yeah Yeahs – “Heads Will Roll”
Okay, we totally understand if you’re still itching to show off your “Thriller” moves–which is why the Yeah Yeah Yeahs features your all-time favorite werewolf, dapper to the fullest by wearing a complete Michael Jackson ensemble (spot the white socks). With a few somersaults, rolling heads, and Karen O looking totally badass with her plastic dress, you’ll be ready for the season in no time.

Panic! At The Disco – “Emperor’s New Clothes”
Straight out of their latest album Death of a Bachelor, Brendon Urie brings us to another dimension of demon transformations and all things creepy! For consolation, the song definitely puts us in a good mood despite the underworld and Urie’s crazy eyes. If anyone can pull this off as a Halloween costume, mad props to you.

Robbie Williams – “Rock DJ”
Don’t be fooled! Robbie Williams certainly lived up to the trick in trick or treat with this upbeat song. Sure, taking his clothes off in every other line might be quite confusing but we applaud that twist in the end.

M83 – “Graveyard Girl”
If John Hughes was given the chance to make a scary music video, this awkward high school tribute would be it. Spotted: a jock, his popular girlfriend, and your average quirky girl who hangs out at cemeteries during her free time. Disturbing yet sweet, M83 sure did tug some heartstrings regardless of those strange dead dogs cameos.

Panda Bear – “Surfer’s Hymn”
It’s stunning how creepy skeletons headed out for a late night skate, with beautiful boneyard footage to match, can be purely reverential. “Dedicated to all the surfers taken by the sea,” Panda Bear’s black-and-white film brings you to a dark bliss of eclectic tunes with a touching tribute at the end.

Rob Zombie – “Dragula”
Now, we’re pretty sure this is the ~creeeeepiest~ video just yet. For the lulz, lead singer Rob Zombie literally looked like a deranged Hagrid from the Harry Potter series, recklessly driving to the tunes of psychedelic metal hits with his buddies: the crazy clown, ghoulish devil, and some horror creatures that we never knew existed. We just hope you don’t drive home like this from a party.

Up Dharma Down – “Flicker”
Straight out of the soundtrack of local horror film The Inheritance, the music video for “Flicker” shows vocalist Armi Millare and the rest of the band stuck in a haunted house with the lights–of course–flickering. The song itself is eerie and hauntingly stunning.

My Chemical Romance – “Helena”
Where are all our former emo kids at? This one’s an icon for every punk pop fan out there. You gotta admit–every female emo fan just wanted to be Helena in this music video. No words for those dramatic dance numbers.

The Backstreet Boys – “Everybody”
Let’s end this list on a fun note. This Backstreet Boys video is what most Halloween parties are—campy, cheesy, but with a whole load of excitement and energy. Also, it’s mad fun to sing out loud with feeling.

All these songs are better consumed in music video form, but if you need them all together to hype yourself up for whatever Halloween party you’re hitting tonight, here you go. You’re welcome:

SHAREBritney Spears is a woman of all trades, and we’re not only referring...

SHAREUPDATE 05/28: According to 88rising’s Twitter, the Asia Rising stream has been postponed...