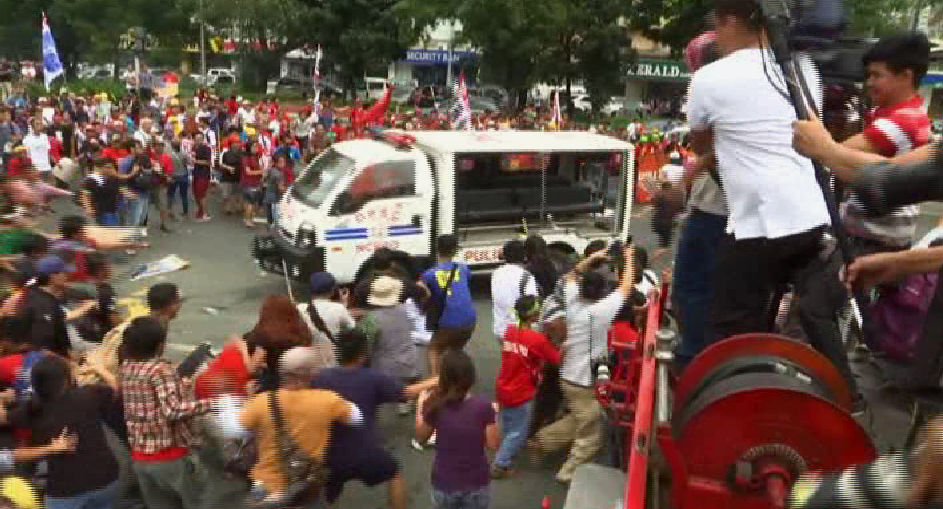 You’ve heard all the unfortunate, harrowing stories of extrajudicial killings of drug-related suspects in the city and all around the country all because they run afoul of that very thing the president loves to hate. But did you know that you can still agree with some of his rants and still get the po trying to 86 you?

This is what a group of anti-US activists found out for themselves at a peaceful rally outside the US embassy today. Student activists and the Lakbayan ng Pambansang Minorya para sa Sariling Pagpapasya at Makatarungang Kapayapaan, a collection of different groups of indigenous people in the country, were protesting at the embassy just to show their support for Duterte wanting a foreign policy that doesn’t rely too much on America, which inherently isn’t a bad thing to agree with. They got arrested, tear-gassed, and most fucked up of all, ran over by a police van. For exercising their freedom to assemble… and agreeing with the dear president.

Warning: some graphic content immediately follows. Hit Back if you don’t want to see a rather gruesome image.

Okay, if you’re still with us, we’re now not actually sure if the police are truly, grossly incompetent, or just power-tripping at this point. Perhaps both. It’s uncalled for, and hopefully those who are blindly pro-administration finally understand the importance of protecting human rights from this grisly incident.

Be careful out there. Between killings and now this, we live in dangerous times.

SHARENot to be dramatic but Billie Eilish is having a show in Manila ...