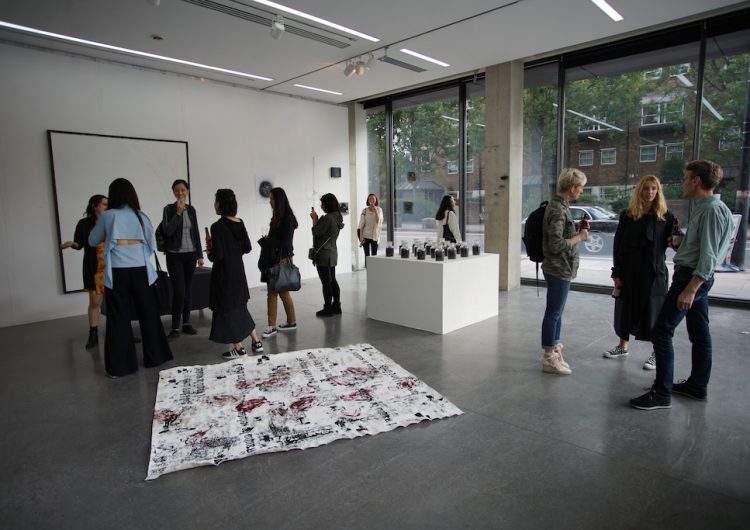 Words have found their place at the gaze of those patient enough to read them, but images gather attention in a literal blink of an eye. When reading a paragraph takes time, the glimpse of a single image find its way to your mind almost immediately. Some images fade away from our conscious as fast as they enter. But some images just…burn.

This is the case when it comes to images of death, distress, loss, and calamity. In a time when these images are commonplace, ubiquitous even, because of this culture of violence in the form of extrajudicial killing and The War on Drugs, the weight of our conscience feels almost empty as we become numb to what’s happening in our streets. Continuous bombarding of these images have rendered us numb, and the passing of time can make the discomfort disappear.

Christina Lopez attempts to rebel against this desensitization. We’ve heard of her work at No Rome’s “All My Friends Are Dead” art show po-up and since then, she’s had a residency in the Royal College of Art in London and a solo exhibit entitled “By Blood” in Hong Kong, and had participated at various group exhibits in Metro Manila, including the recent “Kababae Mong Tao” at the Grrrl Gang anniversary show and “Currency” at District Gallery.

The straightforward nature of her work sits in contrast to her own personality: quiet, reserved. Yet there’s no hesitation; her art has become a vehicle for her to speak. “It’s so hard to explain an idea. I’m the only one who gets it. It’s inside and I have to find a way to let it out. . .I’m a graphic designer so I think in symbols. I look for symbols that have impact.”

Christina Lopez’s body of work asks questions we already know the answers to, a “Why?” to the institutions that contribute to desensitization to the issues we are made aware of everyday. The strokes on her paintings cast as bruises, the paint appears as streaks of blood from a gunshot. Juxtaposed are capitalized words and phrases: “PLUNDER”, “RAPE”, and “DRUGS”.

“I find it quite disturbing that most Filipinos no longer think twice when confroonted with this kind of imagery. It seems like our society has been so saturated with violence. Are our perceptions shaped by the media? Perhaps, our president’s cult-like following? Or is this simply a reflection of our own mindset?”

But she also questions our widespread, comfortable silence to the stories we sweep under the rug. A look at Christina Lopez’s art is a look straigh at the holes in the fabric of our society.

In her portfolio for RCA London, she writes this: …

We get to know more about the artist, from her process to what’s next:

That was actually something I had to deal with when I was in London, and I guess I’m going to have to deal with the same thing in Hong Kong. I was actually surprised because once I introduced myself as a Filipina, the people who attended the exhibition were able to pinpoint that the work is related to the ongoing drug war.

Didn’t help that the Oxford article (Duterte dissing oxford cos they spoke aboutt internet trolls, etc.) came out just days before the exhibition. Of course once I tried to explain stuff to them ‘di maiiwasan na lumabas yung political leanings ko… but I do try to be as less angry as possible.

“The viewer is really important to the work that I do. It’s less about what I have to say and more about what they think.”

Usually I just point out why I did this and that instead of voicing out opinion. When they don’t ask for an explanation, though, I start by asking them what they think. They usually take something from the artwork even without the political knowledge. One viewer saw the phrase “i wanna be sedated” and saw the piece as commentary on freedom and recreational drug use. The viewer is really important to the work that I do. It’s less about what I have to say and more about what they think.

Does this mean you have a specific viewer in mind when it comes to your art?

Not necessarily! When i start to make something i just work with impulse. I don’t know if that’s good or bad. I don’t really think about where I’m going to put it, who is going to see it, etc. To be honest I didn’t even see myself as a “political” artist specifically and I think I still don’t. I work with a lot of different concepts… some about the person, religion, family, etc. but I guess politics generally comes into play because the personal is political.

It’s really interesting when you say that because I’ve fallen to the trap of calling you a political artist. Maybe it’s because you tackle these themes head on. Your art is abstract but it’s very head on.

Yes even some of my mentors have called me very political. Maybe I am? I don’t know. I think personal experiences count too because everything is political. The work I put out in london was very upfront about the issue, but the paintings I put out for Scout Socials aren’t as… confrontational. They still deal with issues like femininity but maybe it’s guised by something a bit personal.

When it comes to your style or the thematics of your work, do you get inspiration from certain people? Sino naginform sa ideas? You mentioned your uncle, pero aside from that.

Gus Albor, ‘kung Pilipino. Gus Albor. Definitely. Abroad, there are a lot. When I look at artists, when I see their paintings, I also want to know about their life and why they make art like that. So I like Louise Bourgeois because Louise is like, “I make art to make myself feel complete”; She has anxiety and fear because of how her life was and then she makes art that’s anti-sexism and stuff like that. So, it becomes political but at the same time still very her. I feel like I’m also like that. Of course, it’s political but it’s also [a] personal thing in my life.

I’m a graphic designer so I think in symbols so I look for symbols that have impact. I love semiology. Kunwari, you have roses. That, the big one, [is] called “Wake Up And Smell The Roses.” So, when you see flowers it’s like beauty and peace and calming but when you juxtapose it with bullets, it changes. 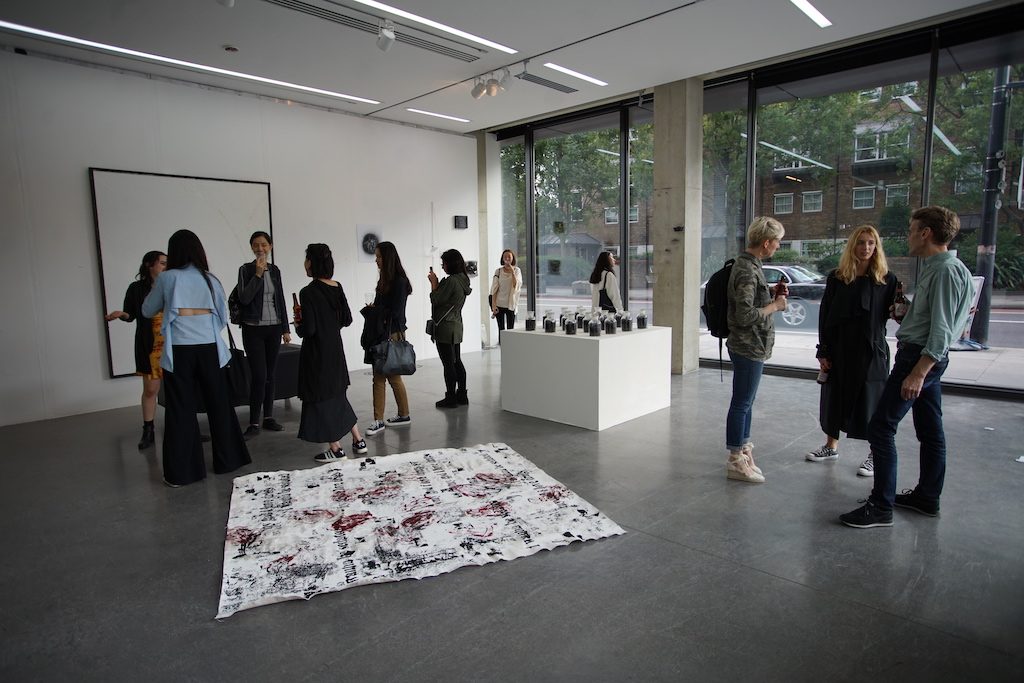 What kind of message do you want to give with your art?

I just want people to think about what’s happening around them. I feel like in a way we’re desensitized. The death toll is seven thousand but it’s not on the headline anymore. Same news, we don’t want to be saying the same thing over and over and over. So, I just want people to think about it, I guess, and discuss. I want to tell them it’s bad, no, don’t do this, don’t do that. But I can’t do that. I can’t impose. So all I can do is make them discuss and realize.

What I really find interesting is where you’re coming from. You come from a well-off family with a conservative Chinese heritage. You were on track to take med school. Your parents support Duterte. But you, in a way, resisted this path laid out for you and here you are breaking expectations. Do you see what you’re doing as breaking away from something?

I was a very angsty adolescent! I loved metal, had piercings and i got into so much trouble in all-girl Catholic high school cause i fought for the Reproductive Health bill. I guess I could still say that my work has that tinge of rebelliousness that goes hand in hand with sparking conversation, but I feel like I kinda grew out of that angst.

My parents and I don’t agree on a lot of things but we’ve reached a point where we can talk to each other without making dinner uncomfortable. With the political leanings, i just had to realize that they were believing in their education and that’s how they were raised. Sometimes a lot of things still don’t make sense. We have similarities, too though! They never hid us from reality. I was privileged enough to learn how important it is to involve and immerse yourself at a very early age. Unlike me, my parents were self-made. My mom taught me how to be “palaban”, my dad taught me how to be “ambitious”.

How did they receive your art?

Yes! I saw them attend one of the events where you were exhibiting.

Well they wanted me to go to med school, so at first they didn’t get it. But when they saw how passionate I was about it they came around. Now they go to my exhibits when they can!

How do you define success when it comes to what you do?

This is very hard to answer!

I just had to ask. Is it commercial success? Is it personal? What kind of scenario would you be in where you can just breathe and say to yourself that you made it?

I think art is so expressive that it’s hard to measure success in a singular way. For some people it might be the number of shows or residencies, for some it might be about how much they’ve grown. To me I guess i’ll feel like i’ve made it when i finally feel satisfied with the work I put out. I don’t think i’ve ever been 100% happy with a piece.

That said, what keeps you going? Aiming for that 100% happiness?

I just keep going because it’s what i do. I’m not sure if i’ll ever reach 100%. It’s inspiring and humbling to read that the artists i look up to feel the same way. I don’t want to bank on that thought, that im gonna be satisfied one day, because it’s really possible that i might never be. If they’re still unhappy with their work, what more ako, ‘di ba?

Where can people find your work?

Im still working on my website! But for now they can find me on Instagram at @tonalopez. For inquiries and commissions please email me at [email protected]

Interview by Lex Celera with help from JP Sanchez

How to light up a firecracker: An unsent letter to uncertain love

I promised I won’t write about you anymore; I tucked that oath in...

Freelance creatives around the world have one common enemy and it’s one phrase...