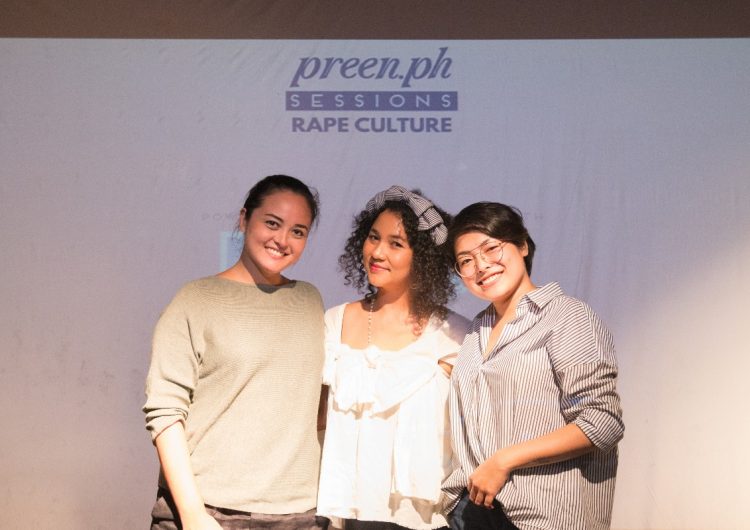 Last week, Preen Sessions took their latest discourse to De La Salle University. Because what better place is there to educate and continue the conversation than on a college campus? Picking up where they left off from their previous discussion, this Preen Session tackled the many aspects and faces of rape culture.

The talk featured Mich Dulce and Kat Alano, stark advocates of feminism who have stood and continue to fight rape culture as it rears its ugly head. Mich, designer and founder of Grrrl Gang Manila, discussed the manifestations of rape culture, including victim-blaming, trivializing sex assault, and the important role which the media plays. On the other hand, host and United Voices Against Rape ambassador Kat, revealed her own personal horror with rape and the reality of this disturbing experience.

Moderated by Preen‘s managing editor Jacque de Borja, the discourse was an enlightening and humbling reality check on our own selves and how we may not even realize that our smallest actions contribute to the culture. Below, we recount the most memorable lessons we’ve picked up from the dialogue. Most of them are things you probably already heard, but it’s always good to be reminded. You can never be too educated, right? Because the first step to fighting it is knowing what it’s about.

Raise your hand if you ever had your mom or dad call you out for a “skimpy” outfit because they were scared of what men might think. It might seem like a harmless request, but this idea that the burden should be put on women to take care of themselves instead of men practicing more self-control is a clear sign of victim-blaming. Mich cited the Anthony Taberna incident where the broadcast journalist commented on reports of a 19-year-old girl getting gang-raped, blaming her for meeting up with the men in the first place. Again, why put the burden on her? For years, we’ve been trying to police women into not getting raped, when instead, we should be telling men that it’s not so hard to not act like a rabid animal and slave to the libido.

“Cat-calling is not a compliment.”

Boys, watch your words when pouring words of admiration. Saying things like “smile ka naman dyan” or “sarap mo naman” are not flattering. If you really want to give a compliment, deliver it sincerely and respectfully. And when a woman expresses discomfort, it’s not for you to decide that her feelings aren’t valid, even if it wasn’t your intention.

Mich called out President Duterte, who happens to be the highest leader of our land and classic poster child of how not to talk about rape. On many accounts, he has used rape victims as the butt of his jokes — most notably the one about the Australian missionary. While the comment in itself was already horrific, what was more appalling was how everyone around him erupted in laughter. This really shows you where a lot of people stand with regards to trivializing rape. Call it out when you see it, even if it’s just your guy barkada making “harmless” locker room talk.

“The media should be responsible in what they advertise to the public.”

One would think that the media, of all people, would take it upon themselves to make sure their content is appropriate for all audiences, but there are still those “who allowed this!?” moments. Mich referenced liquor brand Napoleon Quince, whose infamous billboard caused a public firestorm back in 2004 for their “Nakatikim ka na ba ng kinse anyos? (Have you tasted a 15-year-old?)” tagline. As with all things meant for public consumption, extreme care and nuance is required because you never know who you’re influencing.

“It can happen to ANYONE.”

Often, when we think of the bad guys, the typical movie villain comes to mind — probably scary-looking, tough as nails, and big enough to maul you to a pulp. But that’s hardly ever the case. According to a statistic shared by Kat, seven out of ten rapes are committed by someone close to the victim. In this movie, the bad guy isn’t wearing a sinister mask or carrying around a chainsaw. It could be anyone, and it could happen to anyone too. So never think you’re above the situation just because it wasn’t you in their shoes just yet.

“When someone comes forward to you with their experience of sexual violence, the first thing you should do is listen.”

For victims of sexual violence, it is often harrowing enough to admit to themselves that whatever happened, happened. One can just imagine how much harder it is to share it with another person, only to be shot down and invalidated most of the time. Drawing from her own experience, Kat revealed that coming forward with her story drove her to extreme depression. Being blacklisted by the show business industry, bashed and threatened by thousands, and accused of lying were just some of the things she had to go through. While it isn’t any more pleasant to be on the listening end of someone’s brutal recount, listening is really the bare minimum you can do. And sometimes, that’s all a victim truly needs.

“The Philippines’ history with rape culture goes way back. Understand it, so you can change it.”

Often, the generation gap is what contributes to misunderstandings. What your Baby Boomer parents may see as “protecting you” is our equivalent of perpetuating rape culture. However, while undoubtedly wrong, there is a reason behind this outdated mentality. Much to everybody’s shock, Kat referenced a now-defunct 1997 law in the Philippine Constitution which stated that if a victim was no longer a virgin at the time of her rape, then the blame is put on her. It sounds absolutely ridiculous to hear today, but for a long time, that word was bond for our older relatives. Thankfully, our laws have been heavily reformed to better protect us all.

“It all starts with creating a safe space for victims. We can’t fight this alone.”

The battle against rape culture isn’t just for victims of rape. As Kat mentioned, it starts with YOU. It’s up to each and every one of us to create a safe space where victims don’t have to feel scared to come forward. Rape culture is what causes people to stay silent and only empowers the suspect. When in doubt of the right words to say, just hear them out and let them know that this isn’t theirs to fight alone. Educate yourselves to know what is right from wrong so you know when to put your foot down. Only then can we end this vicious cycle and move forward as humane beings.

SHAREIt was reported that a video circulated wherein women were asked by the...